Forget your troubles, c’mon get happy! Summer Stock is at last available on Blu-ray, and Warner Archive’s excellent rendering makes this modest but enormously entertaining musical a must-have for any fan of the genre.

When you think of Judy Garland on film, three timeless classics spring to mind: The Wizard of Oz, Meet Me in St. Louis, and the 1954 version of A Star Is Born. While I love those movies as much as the next fan, there’s something about Summer Stock, the star’s 1950 MGM swan song, that makes it my top choice whenever I crave a Garland fix. In the rarefied annals of Metro musicals, Summer Stock only rates a footnote (it’s not even produced by the esteemed Arthur Freed Unit), but it’s one of the studio’s most entertaining and least pretentious genre entries, and contains one of Garland’s all-time greatest numbers, “Get Happy.”

Originally envisioned as a vehicle to reunite Garland with her erstwhile teen co-star Mickey Rooney, Summer Stock embraces many of the backstage, barnyard elements of their adolescent let’s-put-on-a-show musicals of the early 1940s. (Thankfully, producer Joe Pasternak deemed Gene Kelly a more suitable on-screen partner for Garland at this stage of her career and assigned him to play opposite her for the third and final time.) In this incarnation, a fledgling New York theatrical troupe invades the tranquil Connecticut farm of Jane Falbury (Garland), and – much to her chagrin – hijacks her barn to mount a Broadway-bound musical revue. Joe Ross (Kelly) is the show’s affable writer-director. Jane’s stagestruck sister Abigail (Gloria DeHaven), who invited the company without ever informing the rightfully outraged Jane, is both his girlfriend and leading lady.

At first, Jane plans to evict the disruptive thespians, but soon strikes a deal with Joe, allowing him to use her barn on one condition: his city-slicker actors and stagehands must pitch in and help with daily farm chores. The mutually beneficial arrangement satisfies Jane, but not her hyper-allergic fiancé of four years, Orville Wingait (Eddie Bracken), and his overbearing, reactionary father (Ray Collins), both of whom ardently disapprove… especially when they learn that Jane herself has caught the theatrical bug.

Summer Stock benefits not only from a top-notch Harry Warren score that includes such marvelous tunes as the lilting “If You Feel Like Singing, Sing,” the rousing “Happy Harvest” (capped by a lung-busting final note that Garland belts to perfection), and the heartrending ballad “Friendly Star,” but also from exhilarating dance numbers and a snappy script that somehow make the tired backstage story seem fresh. (Anyone who’s ever questioned Garland’s terpsichorean abilities need only take a gander at the complex and precisely executed “Portland Fancy” duet with Kelly to fully appreciate her dancing talent.)

The colorful characters and brisk pacing, care of director Charles Walters (who also helmed Easter Parade), keep us fully engaged at all times, and make the film seem far shorter than its 109-minute running time.

It’s no secret that Garland was not well as production on Summer Stock commenced, but the troubled star valiantly soldiered on throughout the arduous shoot and somehow files one of her most energetic, multi-faceted, and sensitive performances. Jane Falbury is one of the most three-dimensional characters MGM ever allowed its prized musical heroine to portray – proud, independent, opinionated, mature, yet still awash with the vulnerability that’s such an integral part of the Garland persona – and Judy fully exhibits all those qualities. No longer saddled with a protective aunt, sisterly roommate, or domineering mentor who monitors her every move, Garland seems fully grown-up for the first time on film, and it’s a thrill to see her so liberated and in command. She laces many of her humorous lines with a welcome cynical edge and seems to relish Jane’s frequent temperamental explosions. Best of all, Judy is also in stellar vocal shape, at last bucking MGM’s “sing pretty” mantra in favor of attacking her numbers with a full-throated vigor that would also distinguish her work in Warner’s A Star Is Born four years later.

Garland had put on considerable weight prior to beginning Summer Stock, and though the added pounds befit her farmer character and lend her complexion a healthy glow, they often lead viewers to speculate that the sublime “Get Happy” number – in which Judy appears significantly slimmer – is an outtake from a previous film. Well, nothing could be further from the truth. After Garland (wisely) decided not to participate with Kelly and Silvers in the crass “Heavenly Music” routine – without a doubt the movie’s low point – and Summer Stock wrapped, producer Pasternak felt the picture needed a slam-bang Garland solo to cap the musical’s show-within-a-show. The Harold Arlen standard was chosen, and when it came time to shoot the sequence three weeks later, Judy – thanks to a Carmel hypnotist – arrived on set looking svelte and glamorous. In a few quick takes, she nailed the number and turns “Get Happy” into a euphoric and chicly sexy tour de force that remains one of the high points of her illustrious career.

As always, Kelly creates a warm rapport with Garland that makes their on-screen romance believable and touching. On his own, he mounts a thrilling dance sequence around such basic elements as a squeaky floorboard and single sheet of newspaper.

A year later, Kelly would choreograph the elaborate An American in Paris ballet, but many find the graceful simplicity of his work in Summer Stock, which also includes the revival-tinged “Dig, Dig, Dig for Your Dinner” and aforementioned “Portland Fancy,” preferable. I know I do.

The first-rate supporting cast, including Bracken (in one of his most hilarious performances), DeHaven (in arguably her best film role as Garland’s spoiled, snooty sister), the always delightful Marjorie Main (as the blunt Falbury cook), and Phil Silvers (who’s either endearingly annoying or just plain insufferable as a bumbling techie-turned-performer), help keep the film on its toes, yet no one can steal the spotlight from Gene and (especially) Judy. The duo take a run-of-the-mill idea and mold it into a tuneful tonic that never goes flat, no matter how many times we see it. Summer Stock may be a minor musical, but almost 70 years after its initial release, the film remains a major piece of good, old-fashioned fun.

Despite the vast treasure trove of MGM musicals locked away in its priceless vault, Warner Archive has been frustratingly stingy in releasing these cinematic jewels on Blu-ray. I’ve been pining for Summer Stock for years, but as usual, Warner has made its high-def debut worth the interminable wait. Richly saturated colors and wonderful clarity distinguish this beautiful, vibrant 1080p/AVC MPEG-4 transfer, presented in the film’s original aspect ratio of 1.37:1. Any of the errant blotches that occasionally marred the previous DVD have been repaired, leaving a pristine picture that bursts with pitch-perfect contrast and clarity. The Technicolor hues are appropriately lush, but never stray into garish territory. Flesh tones are stable and natural looking, patterns are solid, background elements are easy to discern, and deep black levels make a Garland silhouette during the Friendly Star number quite striking.

The original mono track provides distinct, full-bodied sound that caresses Garland’s lovely vocals and crisply reproduces all of Kelly’s taps. The orchestrations – whether lush or brassy – enjoy fine dynamic range, and the audio resists distortion during both Judy’s tirades and powerful belting. The previous DVD contained a bit of hiss, but that’s gone now, and no pops or crackles intrude either. All the dialogue is clear and comprehensible, and a wide dynamic range allows the musical numbers to explode with immediacy and excitement.

Warner has imported all the fine extras from the DVD, beginning with Summer Stock: Get Happy!, a 16-minute featurette that chronicles the film’s rocky production history, salutes its superb cast, and analyzes its musical impact. Thankfully, the enthusiasm and insights of Garland historian John Fricke offset the female narrator’s bland delivery and complement the various film clips included in the piece. Fricke is a Garland champion, but he never sugarcoats the star’s frailties, and his ability to cut through rumors and present the far less sensational truth in a thoughtful, straightforward manner lends welcome balance to the often skewed Garland legend. (It’s too bad Warner didn’t engage Fricke to record an audio commentary for this disc; Summer Stock, more than most musicals, cries out for such a track due to the turmoil that plagued the production.) Here, he relates how a supportive cast and crew helped a fragile Judy survive shooting, and connects her iconic “Get Happy” number to a sequence cut from Easter Parade 18 months earlier. Cast members Gloria DeHaven (who admits to idolizing Garland) and Carleton Carpenter (who jokes about having either “an elbow or an earlobe in every other shot”) also share their fond Summer Stock memories in this slick, informative piece.

The seven-minute Tex Avery cartoon The Cuckoo Clock supplies plenty of slapstick laughs as it details a desperate pussycat’s violent attempts to evict an annoying cuckoo from its comfy clock, while Did’ja Know?, a seven-minute live-action short, humorously depicts the differences between new and expectant fathers and shows us why yawns are contagious. A delightful audio outtake, “Fall in Love,” featuring DeHaven, Silvers, and Hans Conried, and a trailer wrap up the supplements. 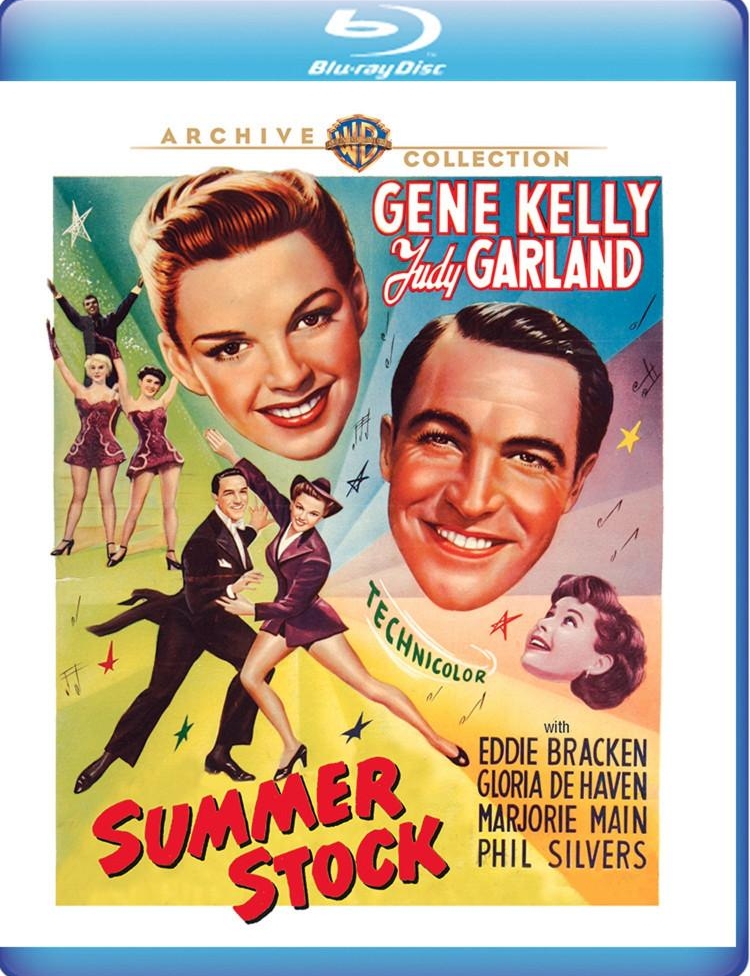