A Strange Adventure is just that. This low-budget, mid-1950s film noir takes us on a journey, but it never quite feels as if we get anywhere.

Republic Pictures may have been a Poverty Row studio during Hollywood’s Golden Age, but it produced plenty of top-flight Westerns, many of which featured its flagship star, John Wayne. Film noir, however, wasn’t really Republic’s bag, and its indifference to the genre is all too apparent in A Strange Adventure, a ho-hum crime yarn that can’t quite capitalize on its promising start. Director William Witney’s tale of a heist gone bad contains all the ingredients of a successful thriller, but the dish that’s ultimately served lacks the requisite salt, spice, and adult flavorings to tantalize the tastebuds.

From the moment we lay eyes on Lynn Novak (Maria English) lounging poolside at a modest urban motel, we know she’s trouble. The shapely, raven-haired beauty brazenly flirts with baby-faced Hal Norton (Ben Cooper), the innkeeper’s naïve, just-barely-legal teen son, and he succumbs all too willingly to her charms. Lynn tells Hal that she’s a nightclub singer waiting for the boys in the band to take her to her next gig, but when they arrive, it’s pretty obvious they’re more like boys from the hood. Al (Jan Merlin) and Phil (Nick Adams) are career criminals who’ve hatched a scheme to rob an armored truck, and Lynn is their gold-digging moll who clearly loves money more than men… and knows all too well how to manipulate the latter to get the former.

Complications force the nefarious trio to coerce Hal into driving their getaway car. A wrong turn leads them up a dirt mountain road to a dead-end cabin. They quickly subdue the occupants, a brother and sister (Joan Evans and Peter Miller) who monitor snowfall for the state utility commission, then get socked in by a blizzard that closes the access road until spring. Tensions mount, along with claustrophobia. As nerves on both sides fray, the crooks begin to crack.

A Strange Adventure starts well, exuding a tough, low-budget feel. Though the characters may be familiar noir archetypes, they brandish enough spirit and spunk to keep things interesting for a while. I don’t mind formulaic stories if they’re well presented, and director Witney initially moves the narrative along at a brisk pace. The script also features some snappy exchanges and a neat little twist early on.

Unfortunately, everything grinds to a screeching halt once the outlaws arrive at their mountain hideout. While the confined surroundings should breed suspense, the wind goes out of the movie’s sails. Any attempts to thwart the bad guys are lame and the climax and denouement possess little pizzazz. A Strange Adventure runs only 70 minutes, but its plodding plot makes it feel much longer. Maybe some star power would have amped up the action, but it’s doubtful even Hollywood’s most accomplished A-listers could have improved the bland material.

I often like casts populated by up-and-coming, largely unknown performers. If they’re good, they lend an air of authenticity to the proceedings that’s more difficult for big-name stars to generate. The actors here, especially the young Cooper (who made a mild splash a couple of years earlier in Nicholas Ray’s Johnny Guitar), do a nice job with the little they’re given, but none of them project sufficient magnetism to improve the screenplay when the story falters. English makes an alluring femme fatale, but she’s not nearly fatal enough to fashion a lasting impression. While that’s not entirely her fault (she can only do so much with the mediocre script), I can’t help thinking that a director with more vision and imagination might have pushed the envelope a bit more. Crime wasn’t allowed to pay in 1956, but it could at least be seductive, complex, stylish, and titillating before karma catches up with the bad guys and gals. For some potent proof, just look at the films of Billy Wilder, Otto Preminger, or Fritz Lang. Witney is not in their class. As a result, A Strange Adventure struggles to find its footing.

With its teen focus, A Strange Adventure may have targeted the younger audiences captivated by Rebel Without a Cause and The Blackboard Jungle at the time of its release. That’s all well and good, but noir isn’t a kid’s game. The characters need to have been around the block a few times and weathered some body blows to truly inhabit the shadowy, duplicitous world. Sadly, Cooper and Evans look like they’ve just stopped playing with marbles and jacks. If there was such a thing as young adult noir, A Strange Adventure would fit right in. Instead, it’s an odd man out.

The good-looking 1080p/AVC MPEG-4 transfer from Kino is a new HD master struck from “a 4K scan of the 35mm original negative” from the Paramount Pictures Archive. Presented in its original aspect ratio of 1.66:1, A Strange Adventure appears crisp and relatively clean. Some errant marks and a few blotches dot the print, but excellent contrast and a nicely varied gray scale produce a pleasing picture. Evident but well-resolved grain preserves the film-like feel, while deep blacks and bright whites balance the image.

The DTS-HD Master Audio mono track provides well-modulated sound that’s free of any age-related hiss, pops, or crackle. All the dialogue is easy to comprehend and the musical score is distinguished by good fidelity and tonal depth. The only disc supplements are an audio commentary with film historian Toby Roan and Jay Dee Witney, son of director William Witney, and a slew of trailers for other Kino Lorber Studio Classics releases. 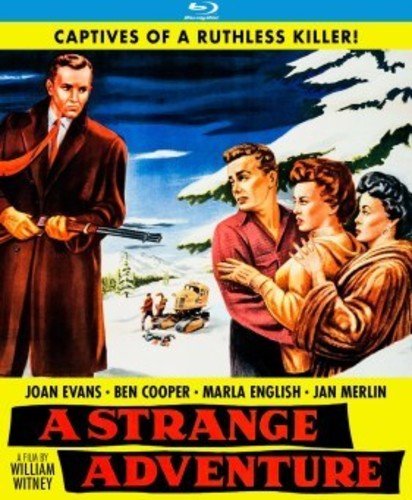