A rootin’-tootin’ Western with plenty of spunk and swagger, The Spoilers caps its mix of action, humor, and romance with a signature barroom brawl. Marlene Dietrich, Randolph Scott, and John Wayne hit the jackpot in this gold rush tale that stakes its claim as a genre classic.

It’s fairly common for Hollywood to remake a popular movie at least once. Heck, there have been four versions of A Star Is Born (five, if you count What Price Hollywood?, the film upon which the original was based). Though it took 85 years to mount all those incarnations, less than half that time was required to output five different versions of The Spoilers. Between 1914 and 1955, Hollywood produced two silents, two black-and-white talkies, and one Technicolor CinemaScope picture based on the warhorse Western. That works out to one Spoilers release per decade for five consecutive decades! Rex Beach’s rough-and-tumble chronicle of claim-staking and claim-jumping in turn-of-the-century Alaska sure must have been a colossal cash cow to fuel so many adaptations in such a short timeframe.

Still, one might think some form of Spoilers fatigue would have afflicted audiences by the time the fourth go-round rolled into theaters in mid-1942. Not so. On the contrary, director Ray Enright’s spirited (re)telling of the oft-told tale made his take more popular and enduring than any other. Credit Marlene Dietrich, Randolph Scott, John Wayne, and a strong supporting cast for adding freshness and fervor to the venerable material, which is ingratiating despite a plethora of genre clichés. Capped by one of the longest, wildest, and most destructive fight sequences in movie history, Enright’s version of The Spoilers is robust, muscular entertainment in the old-fashioned, Golden Age mold.

It’s 1900 and the Alaskan gold rush is in full swing. Hoards of crusty prospectors eager to find their fortune and stake their claim flock to the frontier town of Nome with dollar signs in their eyes and pickaxes in their pockets. Lawlessness, however, pervades the remote seaside outpost, making it a prime destination for dastardly claim-jumpers, who use their money, power, and wiles to seize the land of honest men. These ruthless “spoilers” often pose as benevolent investors, then double-cross their unsuspecting victims after establishing a degree of trust.

The salty, flamboyant Cherry Malotte (Dietrich) runs Nome’s most popular honky-tonk saloon. She’s also in love with roguish, well-to-do prospector Roy Glennister (Wayne), who returns from a lengthy European sojourn clinging to Helen Chester (Margaret Lindsay), the attractive niece of the territory’s top lawman, Judge Stillman (Samuel S. Hinds). An indignant, jealous Cherry dumps Roy, which in turn raises the amorous hopes of gold commissioner Alexander McNamara (Scott), who fancies her. Roy tries to win Cherry back, but when he discovers that McNamara and Stillman plan to steal his lucrative mine out from under him, he redirects his energy and hatches a plot with his loyal sidekick Al Dextry (Harry Carey) to protect their property and bring their corrupt and duplicitous foes to justice.

The Spoilers is a formula Western that’s packed with all the elements fans of the genre love and expect. Maybe that’s why Hollywood kept regurgitating Beach’s yarn decade after decade. Studios could count on both the material’s appeal and a healthy box office return. In Enright’s very capable hands, the 1942 version runs like a finely oiled machine. It’s fluid, flashy, and fast paced. The action rarely flags and the dramatic scenes crackle with snappy dialogue often delivered with a wink and a nod by the accomplished actors, all of whom look like they’re having as much fun as the audience.

Dietrich, donning a platinum blonde bouffant hairdo and an array of gloriously outlandish gowns, channels her best Mae West, shamelessly flirting, batting her eyes, swinging her hips, and manipulating both Scott and Wayne. Her suggestive come-ons and double entendres spice up the story and provide a nice contrast to the animalistic antics of the he-men, who brandish their guns and fists with equal enthusiasm. Beneath Cherry’s tough, gutsy veneer lies a warmth and vulnerability that lend her character essential humanity, and Dietrich beautifully conveys those softer qualities.

She also creates wonderful chemistry with Wayne, which isn’t surprising because the two had been romantically linked off and on ever since they co-starred in Seven Sinners a couple of years before. On his own, Wayne mixes his macho bravado with a hefty dose of self-deprecating humor, and the result is an enormously likable portrayal. Scott exhibits plenty of rascally charm as well, while the always reliable Harry Carey, underrated Margaret Lindsay, and former silent star Richard Barthelmess (in his final screen role) excel in key supporting parts.

Though an unfortunate and uncomfortable blackface sequence is central to the film’s plot (it amazes me just how many Golden Age films include these insensitive and offensive scenes), it’s quickly – and thankfully – overshadowed by the film’s rousing climax, which includes a spectacular train wreck, shootout, and arguably the most famous barroom brawl of all time. The notorious four-minute slugfest between Roy and McNamara starts upstairs in Cherry’s bedroom, spills out into the hallway, tumbles down the stairs, moves across the cavernous barroom, bursts through the front window, and ends in the muddy street outside, leaving a trail of shattered glass and splintered wood in its wake. Half the fight is performed by highly visible stunt doubles, but that doesn’t dull the scene’s visceral impact or diminish its terrific entertainment value.

Did The Spoilers really need to be remade four times? That’s open for debate. I haven’t seen any of its cinematic siblings, so I can’t weigh in with an opinion. One thing is certain, though. The 1942 telling of this well-worn tale deserves a spot in every Western lover’s collection. The Spoilers may not be fresh, but it’s still got plenty of bite.

Presented in its original aspect ratio of 1.37:1, The Spoilers arrives on Blu-ray sporting a handsome 1080p/AVC MPEG-4 transfer that features excellent clarity, contrast, and grayscale. Well-resolved film grain provides a warm celluloid feel and virtually no nicks, marks, or scratches mar the high-quality source material. Black levels are rich, whites are bright yet resist blooming, patterns remain rock solid, and close-ups, especially those of Dietrich in an array of flamboyant outfits, exude Hollywood glamor. The Spoilers received an Oscar nomination for its Art Direction-Interior Decoration, and thanks to such a sharp, clean image, we can drink in all the details. Though a few scenes err slightly on the soft side, this impressive rendering puts us in the thick of the action and brings this rowdy gold-rush tale to brilliant life.

The DTS-HD Master Audio 2.0 mono track supplies clear, well-modulated sound. The rousing musical score fills the room with ease, all the dialogue is easy to comprehend, and the array of Western effects like fisticuffs, gunfire, shattering glass, a train wreck, and boots trudging through ankle-deep mud and across flimsy wooden walkways are all marvelously distinct. Best of all, no age-related hiss, pops, or crackle disrupt the film’s few quiet moments.

The only disc extras are an audio commentary by film historian Toby Roan; a 12-minute automated image gallery that features scads of scene stills, publicity portraits, and reproductions of promotional materials; a re-release trailer; and trailers for other Kino releases featuring Dietrich, Wayne, and Scott. 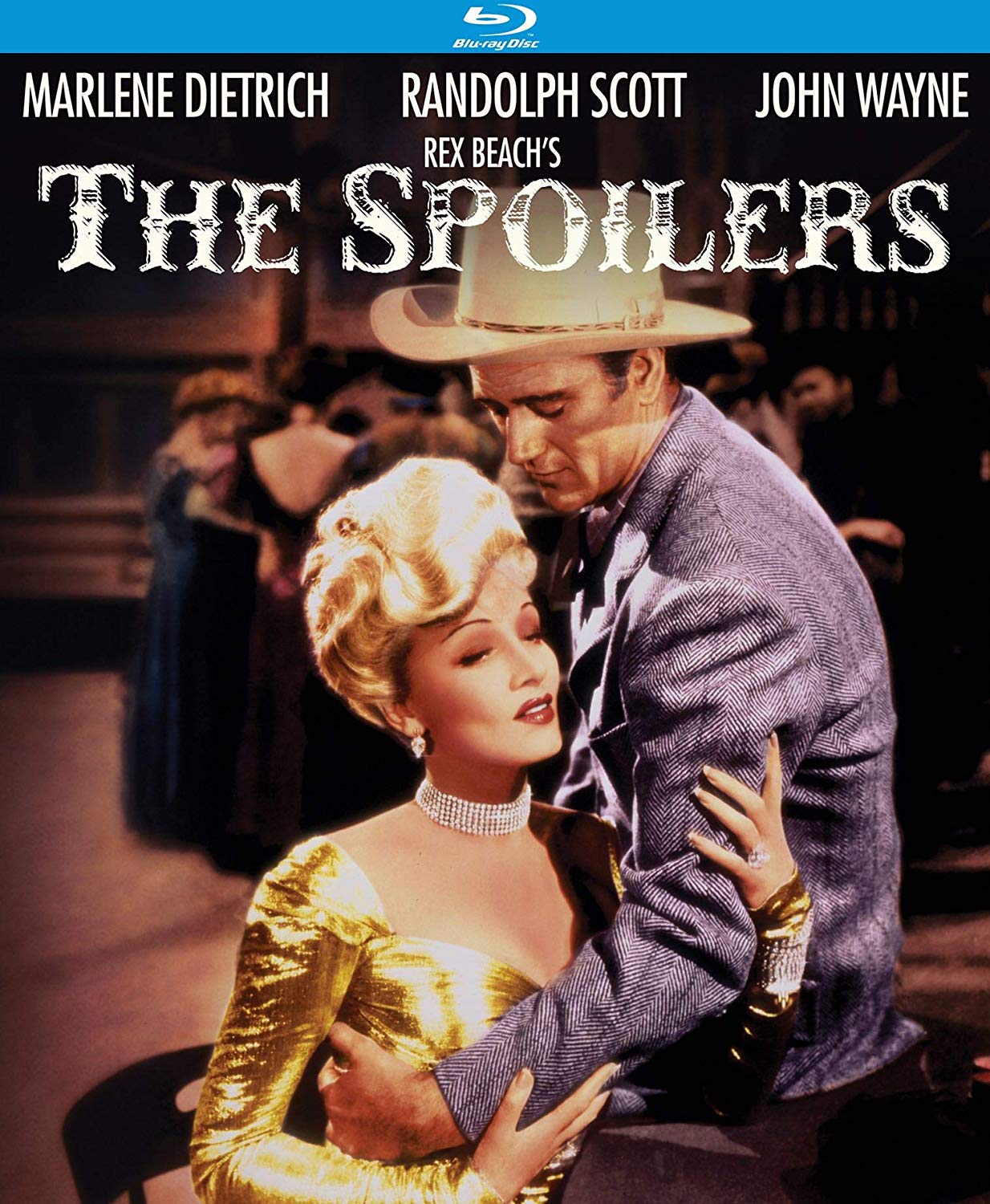 The Spoilers Blu-ray – Buy at Amazon