Having recently subjected myself to Exorcist II again, I felt it important to watch a good John Boorman movie afterwards. The 1967 crime thriller Point Blank is a refreshing reminder that, despite a couple of notorious flops, the director earned his reputation as a master.

I probably shouldn’t talk about John Boorman in the past tense like that. The British filmmaker is still alive and even made a movie in 2014, although it didn’t get much of a theatrical release in North America. Still, at age 85 now, without a decisive box office success in decades, he’s probably unlikely to direct again.

After coming up through the ranks of British television, Boorman’s first feature film was a rather forgettable musical comedy designed as a vehicle for pop band The Dave Clark Five. With that under his belt as proof that he could complete a movie, Boorman moved to Hollywood for his next project, Point Blank, a crime drama adapted from a pulp novel written by Donald E. Westlake.

Lee Marvin stars as Walker, a classic tough guy and man of few words. A career criminal and a consummate professional, Walker is extremely skilled at what he does, though the exact details of that are never made clear, nor do they particularly matter. The film opens with a literal bang as a gunshot rings out and Walker, a man we don’t even know yet, drops to the floor. The sequence that follows confusingly jumps around in time between flashbacks that dole out a bare minimum of information to explain what happened. All we really need to know is that, after completing a heist in the abandoned prison on Alcatraz Island, Walker was betrayed and left for dead by his friend and partner, Reese (John Vernon).

He survives, of course, or we wouldn’t have much of a movie. A resilient sumbitch, Walker escapes the island and recovers, after which he sets about getting what’s due to him – the $93,000 he’s owed for his part in the robbery, not one penny less nor one penny more. He’ll stop at nothing or for no one to get it. That’s bad news for Reese, but getting to him will entail going through a crime syndicate known only as “The Organization” that’s protecting him.

Narratively, Point Blank is sparse in plotting, character development, or even dialogue. It’s a simple story, but never less than compelling. Marvin brings the full brunt of his considerable charisma to the character. He doesn’t need to say much to let you know he means business. Angie Dickinson also has a prominent role as a woman with ties to both Walker and Reese. Amusingly, future sitcom stars Carroll O’Connor and James Sikking show up in small parts as Mob henchmen.

What has really helped the film to endure as a classic is Boorman’s heightened sense of style. The director employs French New Wave techniques such as jump cuts, elliptical editing, and striking use of composition and color to elevate what would otherwise be a standard Hollywood B-movie. The film suggests themes and greater depth without needing to say them. It has often been theorized, for example, that the entire story is the Walker character’s death dream and revenge fantasy. Boorman himself has been very coy about not answering that question over the years.

If the director didn’t have such a clear vision for it, Point Blank almost could have been a film with a serious identity crisis. Not only did the original novel have a different title (The Hunter), it was written by Westlake under the pseudonym “Richard Stark” and the character in the book was named Parker, not Walker. During his lifetime, Westlake forbid use of the original name when he sold the movie rights. By the time Point Blank was made, the Parker series of books already had ten entries, and would go on for another fourteen. Under various names, the character has appeared in eight different films, including a second adaptation of The Hunter (Payback, starring Mel Gibson as “Porter”) that had very messy production problems and, although eventually redeemed by a pretty decent Director’s Cut, isn’t half the movie this one is.

Released in 2014, the Blu-ray edition of Point Blank from Warner Bros. features a very nice 2.40:1 transfer that shows off Boorman’s impressive widescreen framing and interesting use of color. It’s a bit grainy, but not unduly so, and the image has plenty of detail.

The DTS-HD Master Audio 1.0 mono track is loud but claustrophobic. It has several silent stretches where all sound drops out, but that’s an artistic device, not a technical fault.

The primary extra is an audio commentary by John Boorman with Steven Soderbergh, who’s a big fan of the film and admits to borrowing some of its stylistic touches. Also included are a pair of vintage featurettes about shooting at Alcatraz and a trailer.

The Blu-ray’s cover mimics the original poster art, complete with a strange tagline (“There are two kinds of people in his up-tight world: his victims and his women. And sometimes you can’t tell them apart”) that makes the movie sound way more misogynistic than it actually is. Admittedly, the film doesn’t treat its female characters especially well, but that line almost implies that Walker goes around murdering women left and right, which isn’t quite what happens. 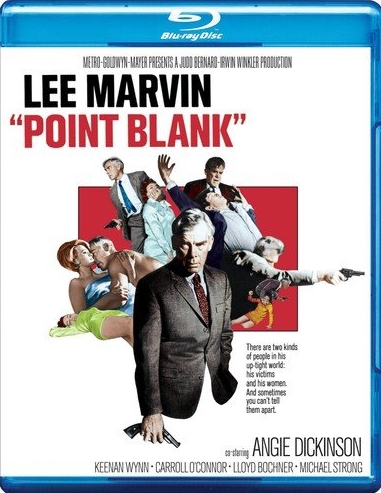