After the monumental success of The Spoilers, Universal took no time rushing its trio of hot stars into another project. The studio’s haste, however, proved somewhat wasteful, as the property chosen for Dietrich, Scott, and Wayne doesn’t measure up to their previous action-packed blockbuster. Pittsburgh brings the attractive triumvirate back from 1900 Alaska, where The Spoilers was set, and plops them into Pennsylvania’s industrial metropolis in a tale that spans the 1920s and ’30s. Instead of mining gold in Nome, Wayne and Scott mine coal in the mountains near Pittsburgh, and instead of slugging it out in a honky-tonk bar, they brawl in the dusty depths of a dark cavern.

Wayne and Scott were instant adversaries in The Spoilers, but in Pittsburgh, they begin as besties. Charles “Pittsburgh” Markham (Wayne) and John “Cash” Evans (Scott) toil tirelessly in the mines, but Pittsburgh dreams of clawing up to the surface and climbing the coal and steel industry’s corporate ladder all the way to the penthouse. His “million-dollar idea” involves supplying a steel mill with cut-rate coke, but to make it work, Pittsburgh forges his future boss’s signature on a loan document to secure the necessary funds. The scheme pays off big, but Pittsburgh’s unscrupulous dealings, serial immorality, rampant narcissism, and shabby treatment of his friends, lovers, and the loyal workers who risk their lives and jeopardize their health in dangerous, toxic mines make it pretty lonely for him at the top.

One of the lovers he mistreats is Josie Winters (Dietrich), whose immigrant father died in a mine accident years ago. The tragedy has scarred Josie, but her fondness for Pittsburgh – and hopes of marrying him – keep her from leaving town and forging a new life away from the coal industry’s grit and grime. When Pittsburgh jilts her in favor of rich socialite Shannon Prentiss (Louise Allbritton), who can further his career and pad his burgeoning bank account, Josie is devastated, but soon finds comfort with Cash. It’s not long before Pittsburgh’s dirty deeds, greed, selfishness, and double-crosses catch up with him and knock him off his lofty pedestal.

Pittsburgh was released exactly six months to the day after The Spoilers in late 1942, and its blatant attempts to recycle a popular formula work against it. Though the film accomplishes its mission on many levels, it constantly pales when compared to its predecessor. On its own, Pittsburgh is often slick, spiffy, and stylish. It’s packed with equal parts romance, action, and toughness, and fueled during its first 75 minutes by a breezy script and amiable performances. Dietrich, Scott, and Wayne elevate the subpar material, and their comfortable chemistry goes a long way toward making the picture palatable.

Unfortunately, like a runaway mine train, the film goes off the rails during its last twenty minutes. The story stops dead in its tracks, and what director Lewis Seiler provides instead is a heavy dose of shameless patriotic propaganda mixed with preachy moralism as we watch time march on and Pittsburgh try to rebuild his life. The flag waving and sermonizing (delivered in pompous voiceover narration) go on and on and on, as dramatic montages mingle with newsreel clips and stock footage to produce a thoroughly dull and interminable denouement.

As a classic movie fan, I have tremendous tolerance and empathy when it comes to World War II propaganda. It served a necessary purpose and played a substantial role in the national war effort, but there’s a right way to do it and a wrong way, and Pittsburgh does it the wrong way. The film’s heart is certainly in the right place, but surely screenwriters Kenneth Gamet and Tom Reed could have concocted a more creative and involving way to integrate the propaganda – and morality – into the film. While I get that Pittsburgh was released just a year after the Japanese attack on Pearl Harbor during a time of great uncertainty and fear regarding the war’s outcome, more raw emotion and less voice-of-God lecturing would have served the movie better.

Pittsburgh is a minor film and mere blip on the career radars of Dietrich, Wayne, and Scott. It’s entertaining enough and competently produced, but it’s undistinguished in many respects. Still, as a bookend to The Spoilers, it’s nice to see this little-known title get a Blu-ray release. Admirers of Dietrich and Wayne will certainly welcome it, despite its faults.

Pittsburgh comes to Blu-ray in its original 1.37:1 aspect ratio, equipped with a lovely 1080p/AVC MPEG-4 transfer. Clarity and contrast are quite good and a nicely varied gray scale lends the image some welcome depth. Several scenes take place below the surface in dark and dingy coal mines, but excellent shadow delineation keeps crush at bay and inky blacks vividly enhance the atmosphere. Though a few stray vertical black lines ruin a couple of beautiful Dietrich close-ups, the source material remains largely free of any dirt or debris.

Music is fairly omnipresent in Pittsburgh, but the DTS-HD Master Audio 2.0 mono track nicely balances it against the movie’s other competing sonic elements. Dialogue is always easy to understand and all the audio accents and atmospherics come through clearly. (The loudspeaker effect in the opening scene is especially powerful and lifelike.) No distortion is present and no age-related surface noise intrudes.

The only supplements are a six-minute automated image gallery that includes dozens of scene stills, publicity portraits, and reproductions of promotional materials; the film’s original theatrical trailer; and several previews for Kino releases starring Dietrich, Wayne, and Scott. 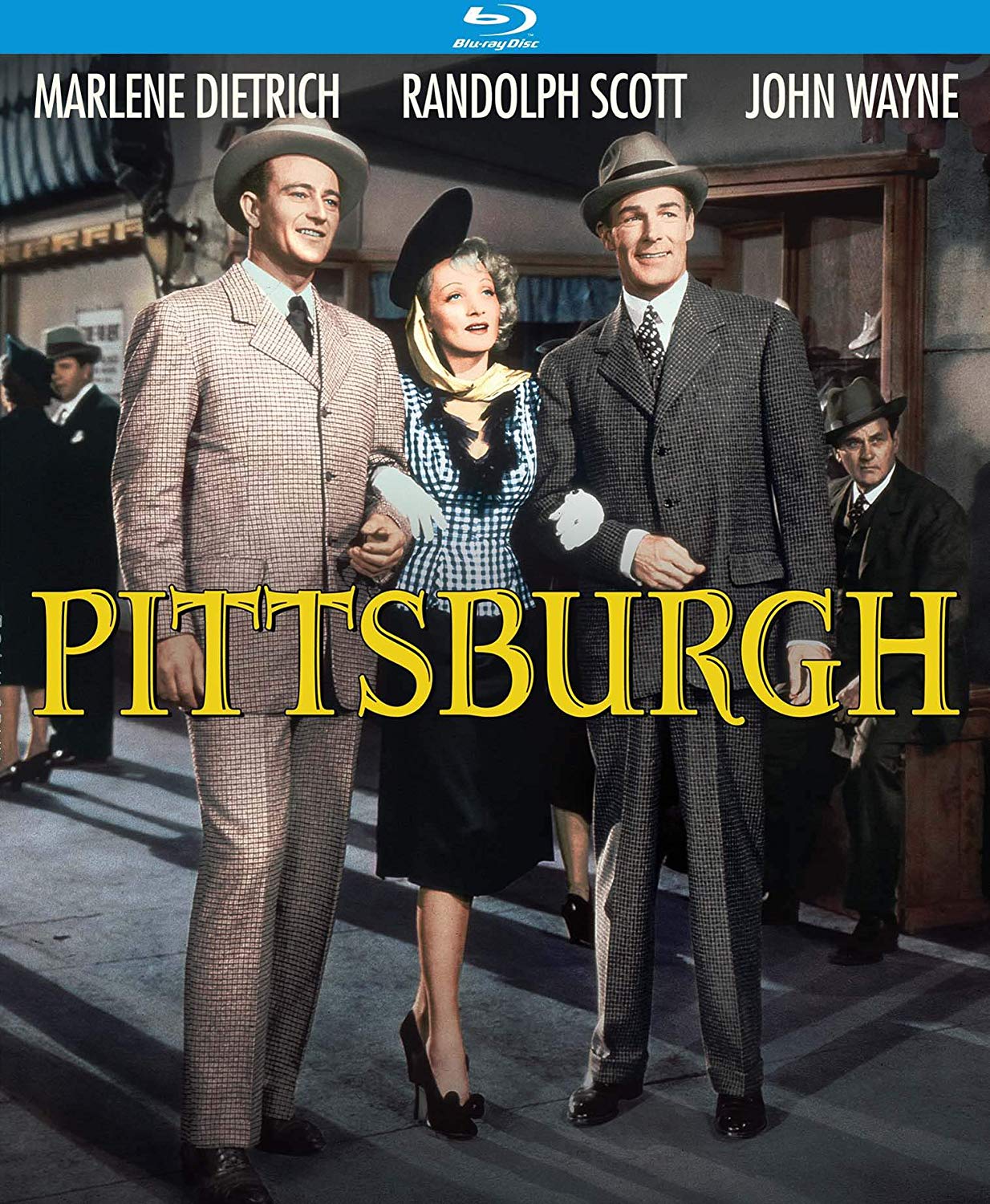