Twilight Time nicely bookends Marilyn Monroe’s career at 20th Century Fox with her first and last starring roles at the studio. Though both Don’t Bother to Knock and Let’s Make Love are decidedly mediocre as films, they showcase two sides of Monroe’s screen persona, allowing us to fully appreciate her underrated dramatic ability and sparkling musical comedy talent.

Marilyn Monroe made some excellent independent films during her brief yet meteoric career (Some Like It Hot and The Misfits chief among them). However, the bulk of her Hollywood output came from 20th Century Fox, where she was under contract from 1951 until her tragic death in 1962 at age 36. Many of her Fox movies – including Niagara, Gentlemen Prefer Blondes, The Seven Year Itch, and Bus Stop – remain iconic, but the two starring roles that bookend her stormy tenure at the studio continue to be overlooked, and there’s a good reason why.

Let’s not mince words. Both 1952’s Don’t Bother to Knock and 1960’s Let’s Make Love aren’t particularly good movies, but Marilyn’s undeniable magnetism and timeless luminosity dull their respective shortcomings. Watching Monroe on the cusp of mega-stardom and then witnessing the toll that success exacted upon her make these two films a fascinating and affecting double feature. While both possess some notable elements irrespective of Monroe’s talents, it’s Marilyn that keeps them aloft. If you just concentrate on the star alone, you’ll reap a more profound respect for her dramatic abilities and uncanny, startlingly intimate relationship with the camera.

Don’t Bother to Knock offers the 26-year-old Monroe an especially rigorous dramatic workout as an emotionally disturbed young woman whose inner demons come to the fore while she’s babysitting a six-year-old girl in a New York City hotel. Still suffering from post-traumatic stress years after the death of her beloved boyfriend in World War II, Nell (Monroe) catches the eye of lovelorn pilot Jed Towers (Richard Widmark) across the hotel courtyard. A brief tryst ensues, but when Nell’s young charge interrupts what Nell believes to be a budding romance, Nell turns on the girl and begins terrorizing her. As the evening wears on, delusions and paranoia consume Nell, sparking a mental breakdown that leads to violence and danger. Of course, no parent today would ever allow a relative stranger to babysit their child (even if they were “just downstairs” in the hotel banquet room), but this highly relatable nightmare scenario smartly preys on our fears and makes for an effective exercise in low-budget suspense.

Despite her limited acting experience, Monroe tackles the tricky role well, juggling naïveté, passion, rage, and emotional distress with surprising aplomb. She also displays a heartbreaking vulnerability that makes us feel for Nell’s predicament despite her shocking and reprehensible actions. Though still rough around the edges and a bit studied, Marilyn’s work has a disarming authenticity, especially in her emotional scenes, that’s most likely drawn from her own experience. Monroe’s mother suffered from mental illness throughout her life, and Marilyn was reportedly terrified the condition might be hereditary. Knowing this backstory makes her performance resonate even more and lends it a rawness that might otherwise be overlooked.

Don’t Bother to Knock, which runs a brief 76 minutes, begins sluggishly and the tale isn’t particularly well developed. Still, this throwaway B movie flaunts an impressive pedigree. Director Roy Baker, who would later helm the classic Titanic docudrama A Night to Remember, nicely builds tension, while cinematographer Lucien Ballard (The Wild Bunch) beautifully photographs Marilyn, maximizing the impact of every close-up. A year after the movie’s release, screenwriter Daniel Taradash would win an Oscar for adapting From Here to Eternity, and most notable of all, Don’t Bother to Knock marks the screen debut of 21-year-old Anne Bancroft, who makes a strong impression as Jed’s estranged girlfriend and the smoky-voiced chanteuse at the hotel bar. (Whether Bancroft sings for herself or is dubbed remains a mystery, though I suspect the latter.) Other familiar faces such as Jim Backus, Elisha Cook Jr., and Jeanne Cagney (James Cagney’s sister) round out the cast.

Let’s Make Love is a far splashier, longer, and lighter film. Its greatest asset is Monroe’s performance as Amanda, a vivacious and doe-eyed musical comedy star who dotes upon a sad sack bit player in her new show. That bit player is really smitten billionaire playboy Jean-Marc Clement (Yves Montand), who learns he will be mercilessly lampooned in a new off-Broadway revue. Upon the advice of his deferential attaché (Tony Randall), Jean-Marc visits a rehearsal to quash the caricature, but instead he’s instantly mistaken for an actor auditioning for the part of Jean-Marc Clement! He’s also instantly attracted to Amanda, so he goes along with the game in the hope of winning her affections, which prove frustratingly elusive.

Let’s Make Love is a pleasant, innocuous diversion, but it lacks the effervescence of more spirited romantic comedies. Though peppered by a few pointed barbs, Norman Krasna’s script meanders along, and the direction by the esteemed George Cukor is anemic at best. On the plus side, Monroe and Montand possess good chemistry (they had a torrid affair during production that led to the demise of Monroe’s marriage to playwright Arthur Miller), and unexpected cameos by Bing Crosby, Gene Kelly, and Milton Berle enliven the proceedings.

The only reason Monroe consented to do this inferior film was because she was desperate to fulfill her contractual obligations to Fox, which never really respected her talent and often saddled her with vapid, ornamental roles designed to exploit her sexuality. Yet despite looking a tad zaftig and occasionally glazed here, Marilyn does her best to rise to the occasion. She handles her free-spirited part like a pro, exuding marvelous warmth, sensitivity, and some welcome spunk. She’s at her best in a couple of lively musical numbers, the finest of which is her dynamite opening salvo, a coyly sexy, tongue-in-cheek take on Cole Porter’s “My Heart Belongs to Daddy” that stands as one of Marilyn’s finest screen moments. Dressed in sheer black stockings and an oversized knit sweater, Monroe summons her inner Lolita, teasing a bevy of male chorus boys during a gymnastic routine that builds to a thrilling, quintessentially Marilyn climax. That number alone is worth the price of the disc.

More for the Monroe connoisseur than the casual fan, Don’t Bother to Knock and Let’s Make Love celebrate the unique qualities that made Marilyn such a legendary and luminous star. She’s the reason they endure. More than 50 years after her death, she still possesses the power to keep us enthralled. The films may not be timeless, but they prove that even when saddled with subpar material, Marilyn Monroe is.

Both Don’t Bother to Knock and Let’s Make Love are attractively packaged by Twilight Time and include an eight-page booklet with liner notes by film historian Julie Kirgo, scene stills, and a reproduction of each film’s poster art. Isolated music tracks and theatrical trailers are included on both discs, and Don’t Bother to Knock also offers two 45-minute documentaries, one on Monroe and one on actor Richard Widmark, from the old Biography TV series. It’s a shame no audio commentaries are included, because I always enjoy hearing how others regard and interpret Monroe’s work.

The transfers of both films are also top notch. Contrast and clarity are excellent. Grain is present yet beautifully resolved so the image maintains a palpable film-like feeling. Only a few errant specks dot the pristine source material. A few sections of Don’t Bother to Knock appear a bit softer than others, but the deep black levels and superior gray scale variance really raise the vibrancy quotient of this low-budget movie. My one gripe with the Let’s Make Love transfer is that the print looks a tad faded, most likely the result of the single-strip color film stock used. Fading has afflicted many films from that period, and unfortunately Let’s Make Love isn’t a famous enough title to warrant a complete color restoration. As a result, hues often look wan, especially during interior studio scenes, and everyone appears slightly paler than they should. It’s a shame, because a little more visual punch might just supply a much-needed jolt to the narrative.

Audio is quite good, too. Don’t Bother to Knock features a DTS-HD Master Audio 1.0 track that’s well-balanced and free of any age-related pops and crackles, while Let’s Make Love includes both DTS-HD Master Audio 5.1 and DTS-HD Master Audio 2.0 tracks. I only listened to the 5.1 option, which was crisp and clear and featured noticeable stereo separation across the front channels. I couldn’t detect any surround effects, but the musical numbers nicely fill the room, thanks to excellent fidelity and tonal depth. 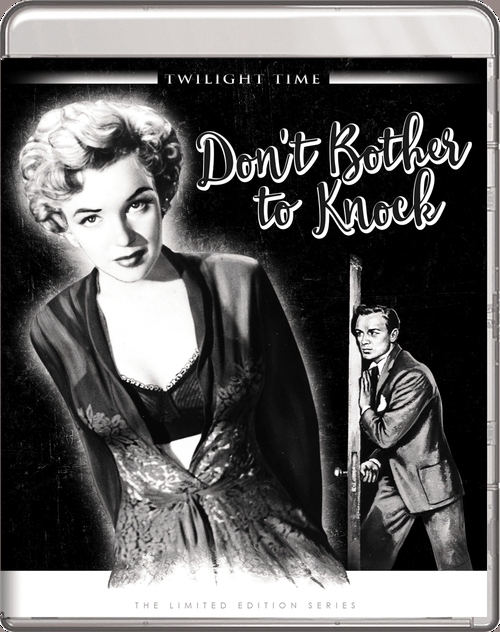 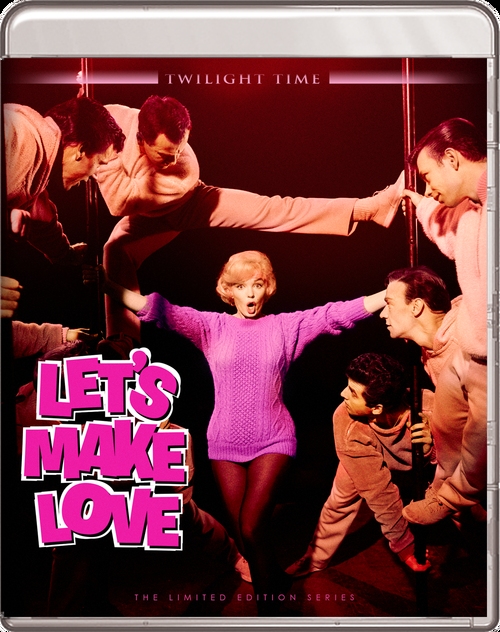 Click the Image to Buy the Blu-ray at Twilight Time Movies.