The quintessential hooker with a heart of gold, Irma la Douce is a captivating character, and the film that bears her name – directed by comic maestro Billy Wilder – is often charming, warm, and clever. It’s also very long.

Hollywood loves a good prostitute, at least on screen. Over the years, the film industry has churned out countless movies that glorify and romanticize the oldest profession as only a male fantasy can. Forget the harsh reality of sleaze, exploitation, servitude, and degradation. Hollywood hookers are not only hot (that’s a given), they’re also kooky, practical, shrewd, sympathetic, tender, even – to quote the title of Xaviera Hollander’s bestselling memoir – happy. Irma la Douce is all those things. In fact, her personality is so attractive and her story, as told by writer-director Billy Wilder, is so uplifting, she’d make a great recruiter for her line of work. Hey, if Irma can find love, wealth, security, and contentment schtupping men for money, anyone can.

Screwy messaging aside, Irma la Douce remains a delightful and often beguiling screwball farce 55 years after its initial release. Wilder (with a big assist from his long-time collaborator I.A.L. Diamond) puts his personal stamp on this rambunctious romp, mixing the madcap masquerade element of Some Like It Hot with his patented razor-sharp quips and wonderful sense of the absurd. Wilder has a way of firing a zinger one minute and breaking our hearts the next as he deftly navigates the combustible universe of male-female relationships and vagaries of the human spirit. The line between laughing and crying is a fine one, and Wilder, better than almost anyone, exploits that delicate truth to perfection.

As the film opens, Louis Jourdan’s mellifluous narration provides appropriate French flavor and introduces us to Irma (Shirley MacLaine), the most popular pro at the Hotel Casanova in a seedy section of Paris. The hookers, their pimps, and the corrupt cops on the beat all peacefully coexist until ultra-ethical policeman Nestor Patou (Jack Lemmon) arrives on the scene. Determined to clean up the neighborhood, Nestor raids the hotel and arrests all the girls, much to the chagrin of one of their most faithful clients, Inspector Lefevre (Herschel Bernardi), who fires Nestor on the spot.

Destitute and depressed, Nestor returns to the hookers’ local watering hole, where he witnesses Irma’s burly pimp (Bruce Yarnell) mistreating her. The mild-mannered Nestor somehow beats down the bully, and as a reward, an ebullient Irma offers him shelter. After a night of “romance,” Nestor falls for Irma hook, line, and sinker. He wants to get a job to support her, but the idea hurts Irma’s pride. The career girl tells Nestor she’s always been the breadwinner for all her pimps… errr, men… and she’s not about to stop now. In a strange twist, Nestor’s love doesn’t inspire Irma to quit turning tricks, but rather “to work twice as hard” for him as she “ever did for any of the others.”

Nestor is touched by her devotion, but the idea of a steady stream of horny males pawing his beloved on a daily basis makes his skin crawl. He wants to be the only man to make love to Irma, so he decides to masquerade as an aristocratic, middle-aged British lord who refuses to lay a hand on her, yet pays a princely sum for her companionship. With so much money coming from a single client, Irma doesn’t need to screw anyone else. The only problem is that Nestor has to work his tail off to make enough dough to keep up the charade. After a while, multiple complications and mind-numbing fatigue take a toll on him and imperil his relationship with Irma.

Irma la Douce is far from Wilder’s best film, or even his best comedy. It’s no The Apartment, no Some Like It Hot, no One, Two, Three. It’s probably closer in tone to The Seven Year Itch, especially in the way it depicts a shy, sheltered, somewhat nerdy man’s fascination with his dream girl, who personifies sex. Interestingly, Marilyn Monroe, who famously starred as the intoxicating It Girl in Itch, was Wilder’s original choice to portray Irma, but their love-hate (mostly hate) relationship sadly quashed that inspired idea. (Monroe’s untimely death in mid-1962 also would have prevented her from playing the role in any event.)

Excessive length also hampers the film. Unfortunately, unlike the way we’ve heard prostitutes prefer their liaisons, Irma la Douce is far from a wham-bam-thank-you-ma’am kind of movie. Most comedies struggle to sustain themselves for an hour-and-a-half, so just imagine the hoops Wilder jumps through to stretch this simple tale to a whopping 143 minutes. Though it never really drags, the story does get a bit tiresome as the plot becomes ever more convoluted and outrageous, and the characters begin to wear out their welcome just when we need to connect with them the most. Believe it or not, Irma La Douce was based on a Tony-nominated Broadway musical, but Wilder had no interest in directing a musical, so he stripped all the songs from the show and wrote a straight comedic adaptation instead. Just think how long the film would have been with half a dozen songs and a few production numbers sprinkled in!

Still, in its own inimitable way, Irma la Douce is a captivating piece of entertainment. Light, bubbly, occasionally touching, and packed with memorable lines and funny bits, it delivers just often enough to make a favorable and lasting impression. Credit MacLaine, who earned a Best Actress Oscar nomination for her vivacious portrayal, and the always natural and relatable Lemmon, arguably Wilder’s favorite leading man, with lending the farcical material essential authenticity. The two, under Wilder’s tutelage, made a terrific pair in The Apartment three years earlier, and they rekindle that magic here.

Lou Jacobi is wonderful as Moustache, Nestor’s confidante and mentor who also runs the bustling bar where all the characters hang out. His signature line, “But that’s another story,” plays a plum part in the film, much like Joe E. Brown’s iconic “Nobody’s perfect” retort at the end of Some Like It Hot. The role was reportedly intended for Charles Laughton, who died before production commenced, but Jacobi is so good, it’s tough to imagine anyone else in the part. Bill Bixby of TV’s My Favorite Martian, The Courtship of Eddie’s Father, and The Incredible Hulk fame enjoys a memorable bit as a tattooed sailor, and keep your eyes peeled for a young James Caan in a blink-and-you’ll-miss-him walk-on. Irma la Douce was Caan’s inauspicious film debut, but even though he doesn’t utter a word, his presence is unmistakable.

Like its free-spirited heroine, Irma la Douce has charm, spunk, warmth, and a crazy streak a mile wide. This Wilder comedy isn’t wilder than Some Like It Hot, but delightful moments abound and a big, romantic heart buoys it up. For some, this film might be a one-night stand, but others might find themselves returning to it again and again, kind of like a regular. The good news is that visits to this bewitching prostitute are totally legal.

Bright, vivid color distinguishes the Blu-ray’s 1080p/AVC MPEG-4 transfer, which is culled from a “brand new HD master from a 4K scan of the original camera negative.” Presented in its original aspect ratio of 2.35:1, Irma la Douce boasts excellent contrast and clarity that honor Joseph LaShelle’s Oscar-nominated cinematography, as well as a healthy but not overpowering grain structure that preserves the feel of celluloid. Details in the busy backgrounds are easy to discern, lush black levels anchor the image, and no digital anomalies are present. The source material isn’t pristine, but only a few stray marks dot the print. All things considered, it’s hard to imagine this Billy Wilder classic looking any better than it does here.

The DTS-HD Master Audio mono track is a mixed bag. The Oscar-winning musical score by Andre Previn sounds rich and full-bodied, filling the room with ease. Audio effects are also distinct, but a muffled quality afflicts the dialogue, which is easy to understand but not particularly pleasant to listen to. No distortion is present, and any age-related surface noise has been erased. Disc supplements include two audio commentaries – one from film historian Joseph McBride, the other from film historian Kat Ellinger – and the film’s original theatrical trailer. 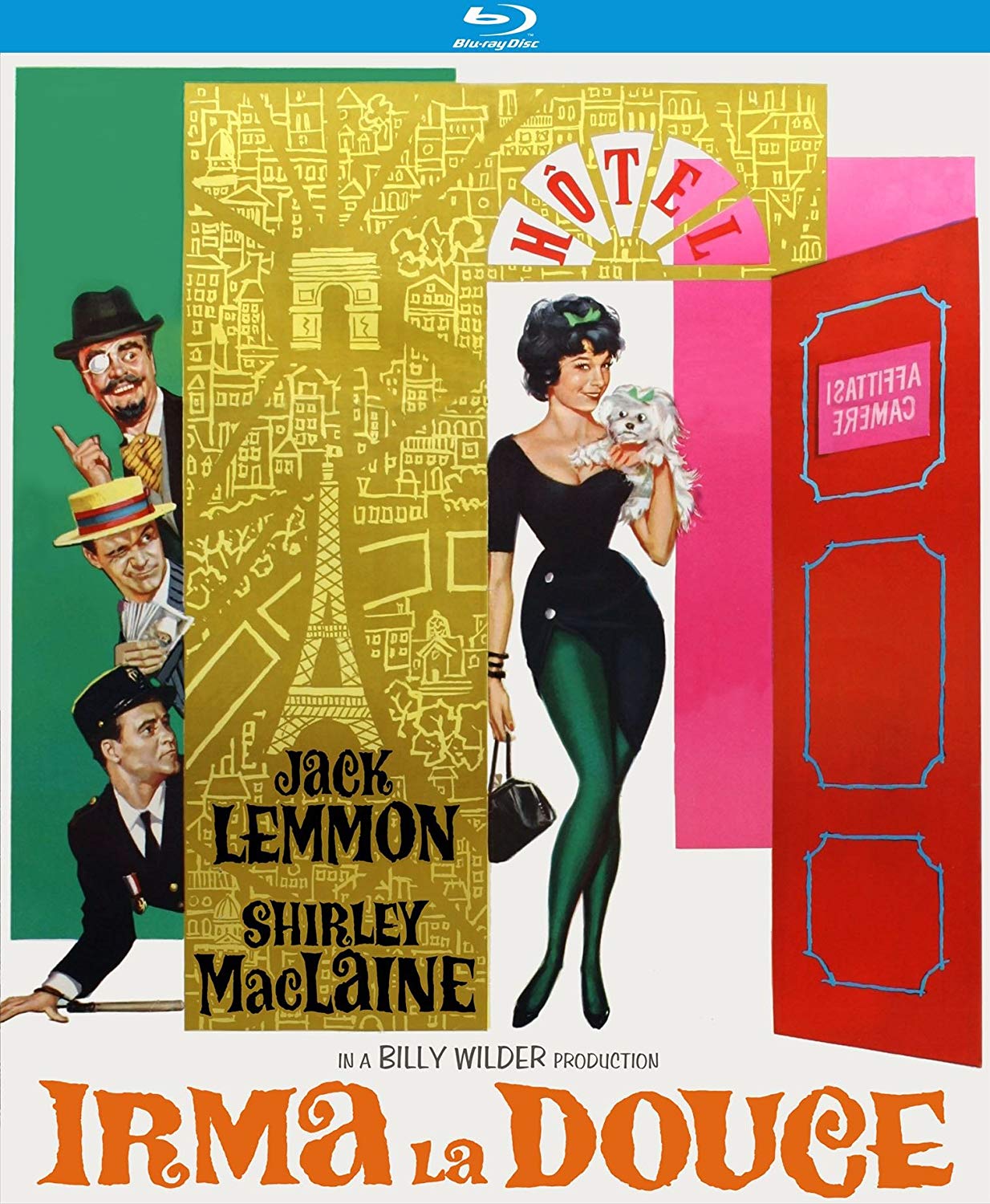