Watching Burt Lancaster and Kirk Douglas face off is the main attraction of I Walk Alone, a by-the-numbers film noir that rarely rises above the mundane. Yet thanks to these two iconic tough guys, the hard-boiled tale of betrayal and revenge still packs a punch.

Burt Lancaster and Kirk Douglas often had more chemistry together than they did with any female co-star. The two legendary actors burst upon the Hollywood scene at about the same time in the mid-1940s, and their inimitable combination of brashness, kinetic energy, rugged good looks, and untamed masculinity appealed to both women and men. Through the sheer force of their powerful personalities and a couple of distinguishing physical characteristics (Lancaster’s mile-wide toothy grin and the cavernous dimple on Douglas’s chin), they routinely hijacked the screen and took it hostage, commanding attention and rarely relinquishing focus. Though Lancaster would win an Oscar (for 1963’s Elmer Gantry) and Douglas, despite a few nominations, would not (aside from a long overdue honorary statuette in 1996), their careers followed parallel tracks, which might explain why they were so often paired together. Seven times to be exact… as much as, or even more than, some of the industry’s greatest male/female teams.

I Walk Alone marked the first time these two titans appeared on film together and, not surprisingly, they generate plenty of fireworks. When watching the movie today, however, it’s easy to forget that when the picture premiered on the final day of 1947, the futures of Lancaster and Douglas hardly seemed certain and their reputations were far from lofty. I Walk Alone might have only been each actor’s fourth film, but they already look like seasoned pros poised to smash through any barriers and grab the world by the balls.

A typical yet engrossing Mob yarn, director Byron Haskin’s tidy film noir begins with the Big Apple homecoming of hardened criminal Frankie Madison (Lancaster), who’s just spent 14 long years up the river in Sing Sing. His mild-mannered pal and former colleague Dave (Wendell Corey) meets him at Grand Central Station and sets him up in a modest room at a midtown hotel. Life has taken a toll on both men, but Frankie thinks Dave looks far worse for wear because he’s still under the thumb of ruthless racketeer Noll Turner (Douglas), who framed the “smart yet sentimental” Frankie for the murder that sent him to prison back when they all were hotshot bootleggers at the tail end of Prohibition.

Noll, whom Frankie calls by his youthful nickname “Dink,” has come a long way since then. He now runs a high-end Manhattan nightclub, but he’s still waist-deep in criminal activity. Sophisticated yet forever sleazy, Dink romances Kay Lawrence (Lizabeth Scott), the club’s smoky-voiced chanteuse, while sleeping with Alexis Richardson (Kristine Miller), a slumming married socialite looking for cheap thrills. Frankie despises Dink, but wants his cut from the sale of a low-end joint the two owned prior to Frankie’s conviction. Suspicious of Frankie’s motives, Dink asks Kay to wine-and-dine him, hoping her allure and copious amounts of alcohol will loosen his lips. She dutifully obeys, but ends up falling in love with the tough but tender and tortured Frankie instead, and soon sees Dink for the dick he really is. She, Frankie, and Dave all agree they’re fed up with Dink and conspire to bring him down. However, disentangling themselves from Dink’s nefarious web isn’t so easy… especially after Dink once again pins a Mob murder on Frankie.

Aside from its fight scenes, macho confrontations, and backroom dirty deals, I Walk Alone incisively depicts the alienation and disorientation Frankie feels after 14 years in prison. With striking eloquence, Frankie expresses how life passes you by in the slammer, how people and civilization change and evolve while you remain on hold, waiting impatiently to resume your prior existence. That reality hits home when Kay wrongly assumes Frankie is a returning World War II G.I. instead of an ex-con, and it’s a heartbreaking moment when Frankie reveals he missed the entire war and the honor of fighting for his country because he was locked in a cell like an animal, serving time for a crime he didn’t commit.

Strong performances infuse I Walk Alone with an explosive vitality that belies its by-the-numbers script and presentation. Lancaster barks and Douglas snarls, but they shade their high-octane portrayals with subtle nuances that add critical dimension to their cardboard characters. The two often resemble a couple of heavyweight prizefighters in the ring, warily circling each other, waiting for one to let his guard down so the other can pummel him with a verbal jab or physical blow. Though their roles lack any ambiguity, it’s still fascinating to watch them navigate their respective terrains. We root for each to land his fair share of dramatic punches.

Scott and Corey reunite with Lancaster after appearing with him only months before in the far more intriguing Desert Fury. Although both of their parts here are much less interesting, they do their best to rise above them. Corey does a better job as the beleaguered, weak-willed bookkeeper who can’t escape Dink’s dominance. It’s a sympathetic part and he milks it for all it’s worth. Though Scott capably performs a catchy torch number (her singing is dubbed), she spends most of the movie comforting Frankie, and her perpetual watery eyes, pained expressions, and supportive platitudes grow tiresome over time. While she files a competent portrayal, it’s nothing special.

What I Walk Alone really needs is a femme fatale to up the dramatic ante and supply some necessary sex appeal. Scott looks lovely in her Edith Head gowns, especially a sleek white dress that contrasts nicely with the dingy nightclub backdrop, but her character is too much of a Polly Purebread to mesh with the movie’s noir trimmings. As much as she alludes to a checkered past, we never witness any evidence of it. Like most noir good girls, she’s sweet but dull. Miller, who also had a bit part in Desert Fury, provides some sass as the bitchy socialite, but she disappears halfway through the picture.

That leaves the story to the guys, and its fundamental mano-a-mano elements suit Lancaster and Douglas to a T. Mob stories like I Walk Alone are really just dysfunctional bromances gone bad, and Burt and Kirk make quite the swell pair. With apologies to Casablanca, this hard-boiled movie marked the beginning of their beautiful screen friendship, which would last almost 40 years. That’s more than most marriages. Who could have predicted that one of Hollywood’s most durable unions would be between two of its most macho actors?

Presented here in an aspect ratio of 1.33:1 (IMDb lists the film’s original aspect ratio as 1.37:1), I Walk Alone looks quite nice on Blu-ray, thanks to a new HD master culled “from a 4K scan of the 35mm safety dupe negative by Paramount Pictures Archive.” The 1080p/AVC MPEG-4 transfer appears wonderfully film-like, with well-resolved grain supplying necessary texture without overpowering the image. The relatively clean source material sports some nicks and marks, but they rarely distract from the drama. Although some softness creeps in here and there, the picture remains consistently clear and vibrant throughout. Blacks are rich, whites are crisp and well defined, and all the grays in between are varied enough to heighten depth and detail levels. Close-ups show off fine facial features well (though I wish they were a bit sharper) and excellent shadow delineation keeps crush at bay most of the time. This isn’t the best film noir transfer I’ve seen, but it nicely honors Leo Tover’s cinematography.

Good fidelity and tonal depth distinguish the DTS-HD Master Audio mono track, which produces clean sound with only a few instances of mild surface noise. A wide dynamic range handles the highs and lows of Victor Young’s sweeping musical score with ease, and all the dialogue is clear and comprehendible.

The only disc extras are an audio commentary, the film’s original theatrical trailer, and a slew of previews for other Kino Lorber Studio Classics releases. 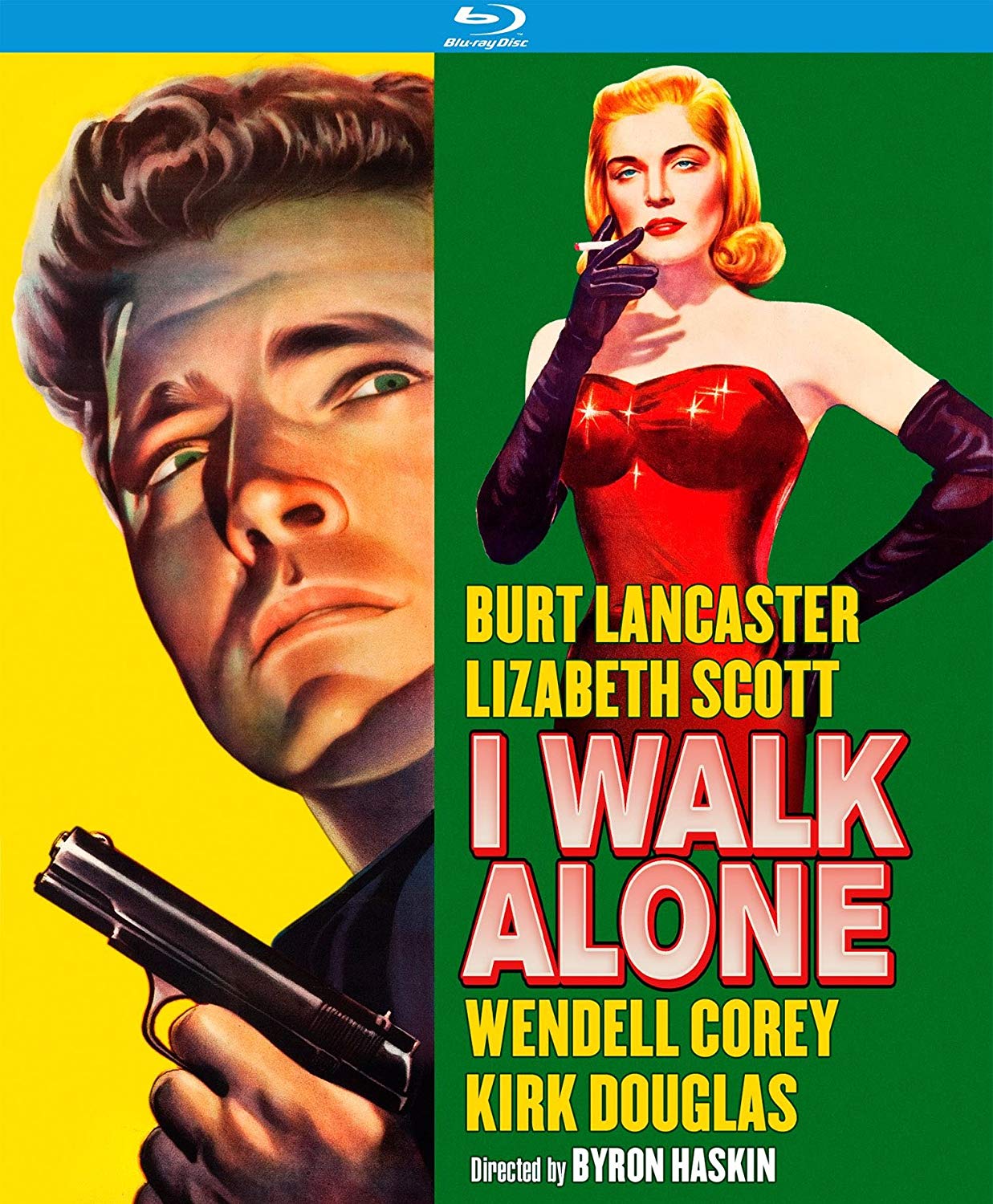