I, Jane Doe is a nifty little mystery that flips our hallowed justice system on its ear. It’s also a far better film than its lack of notoriety would lead one to believe.

“There are times when the deceased must stand trial alongside the defendant.”

So proclaims impassioned defense attorney Eve Curtis (Ruth Hussey) in the 1948 courtroom drama I, Jane Doe. Her sweeping, righteous pronouncement wields tremendous dramatic impact, but the trouble is that no judge (except the one in this film) would ever agree with it. Though defense attorneys routinely try to put murder victims on trial to deflect attention from or justify the violent actions of the accused, such a practice is almost always swiftly shot down by the bench. Even first-year law students learn that a victim’s past conduct is irrelevant in the examination of a crime and determination of an assailant’s guilt. Murder is murder, plain and simple. It doesn’t matter if the stiff was an A-1 ass and deserved what he/she got. Pumping lead into another human being is still a crime, and though killing someone for destroying your life might be considered proper retribution in a moral sense, the law doesn’t see it quite the same way.

I, Jane Doe examines this issue with surprising acuity and audacity. I say surprising because during the period in which this largely forgotten 1940s melodrama was produced, Hollywood was governed by a black and white production code that left little room for gray issue debates. Maybe the film industry was too preoccupied at the time with the insidious probes of the House Un-American Activities Committee to care much about a low-budget mystery from a third-tier studio, Republic Pictures. Today, though, this fascinating angle – however outlandish it may seem – enhances a pedestrian story, fortifying it with welcome substance that sticks to the film’s ribs.

The story begins with the shooting of Stephen Curtis (John Carroll) by a woman he seemingly knows. That woman, however, refuses to give her name to the authorities, so the court dubs her Jane Doe during the trial. Jane (Vera Ralston) waives her right to testify in her own defense and, as a result, is summarily convicted and sentenced to death. After she collapses in court, a doctor discovers that she’s pregnant and her execution is postponed until she gives birth. During this time, Stephen’s widow, Eve (Ruth Hussey), who oh-so-coincidentally used to be a defense attorney, learns more about Jane’s story and reopens her practice in the hope of reopening Jane’s case.

Somehow, Eve persuades a judge that depression prevented Jane from actively participating in her own defense during her first trial and she deserves a new one. (Yeah, like that would ever happen in real life.) This time around, Jane tells her sad story to the jury, and thanks to a series of flashbacks, we learn what an unabashed and unapologetic heel Stephen was. He stepped out on Eve before the war, but took his adultery a step further during it. Shockingly, Jane reveals that she’s also Mrs. Stephen Curtis, and details how her bigamist husband’s repeated betrayals brought her to the breaking point.

The idea of a widow arguing to acquit the woman who her killed husband in cold blood is intriguing, if preposterous. Where I, Jane Doe really treads on thin ice is in its systematic bastardization of the U.S. justice system. A jury can’t exonerate a murderer simply because the victim was a despicable person, but that’s the hook upon which Eve hangs her case. So what if Stephen married two women, treated them both like dirt, screwed around, lied through his teeth, and went to reprehensible lengths to save his own skin? That doesn’t make it okay for his spurned lover to bump him off just because he ruined her life. Is the world a better place without Stephen Curtis? Probably, but the woman who shot him should still get the electric chair.

Such erroneous plot points severely strain the film’s credulity, yet despite them, I, Jane Doe remains a slick, entertaining mystery. Credit director John H. Auer for employing off-kilter camera angles and occasional subjective perspectives to spice up his material, and screenwriter Lawrence Kimble for supplying a taut script (even if it does play fast and loose with judicial procedure). The cast also deserves kudos for filing earnest performances that make the whole enterprise seem far more important than it is.

Hussey is perhaps best remembered for playing the cynical photographer (and James Stewart’s girlfriend) in The Philadelphia Story, which may explain why she seems to be channeling Katharine Hepburn throughout this picture. Carroll makes an appropriately dashing rogue who covers his cruelty with a thick layer of hunky charm. Gene Lockhart, who portrayed the benevolent and befuddled judge who clears Kris Kringle in Miracle on 34th Street the year before, goes to town as the vitriolic prosecutor determined to see the rule of law upheld. (Good for him, by the way!) Benay Venuta also excels as Eve’s wisecracking associate. It’s the kind of part Eve Arden often played to perfection, and it’s tough not to constantly envision Arden in the role.

The film’s most fascinating figure, though, is Vera Ralston, who plays the titular character with wonderful warmth and sincerity. The exotic Ralston achieved initial renown as a figure skater, finishing second to Sonja Henie in the 1936 Winter Olympics in Berlin, then parlayed that success into a film career after catching the eye of Republic Pictures president Herbert Yates. The mogul became obsessed with Ralston, personally overseeing all her movies. In 1952, when she was 29 and he was 72(!), he married her. Much like the union of Jennifer Jones and David O. Selznick, their bond, which endured until Yates’s death 13 years later, benefitted Ralston professionally. Though not much of an actress – it’s doubtful she would have lasted long in Hollywood were it not for Yates’s tutelage (parallels between the fictional Charles Foster Kane and Susan Alexander in Citizen Kane are not unfounded) – she rises to the occasion here, delivering arguably her finest performance. Consequently, it’s no wonder that Ralston often cited I, Jane Doe as her favorite of all her films.

Hollywood rarely lets facts stand in the way of a good story, and I, Jane Doe is a classic example of that dubious philosophy. Though it would never have a leg to stand on in a court of law, this highly entertaining movie possesses plenty of dramatic stamina, and I’m happy that Kino Lorber took it out of mothballs and gussied it up for a Blu-ray release. I rest my case.

Presented in its original aspect ratio pf 1.33:1, I, Jane Doe looks pretty as a picture on Blu-ray. The 1080p/AVC MPEG-4 transfer is struck from a “brand new HD master from a 4K scan of the original 35mm negative and fine-grain by Paramount Pictures Archive.” It boasts excellent contrast and clarity. Rich blacks, bright but stable whites, and beautifully graded grays combine with faint grain to produce a balanced, film-like image. Background details show up nicely, close-ups are crisp, and only a few blotches and stray vertical lines dot the well-preserved source material.

The DTS-HD Master Audio mono track supplies clear, well-modulated sound. A wide dynamic range keeps distortion at bay while embracing the highs and lows of the musical score by Heinz Roemheld, who won an Oscar a few years earlier for his work on the George M. Cohan bio-pic Yankee Doodle Dandy. All the dialogue is easy to comprehend and no age-related surface noise is present. The only disc supplements are a few trailers for other Kino Lorber Studio Classics releases. 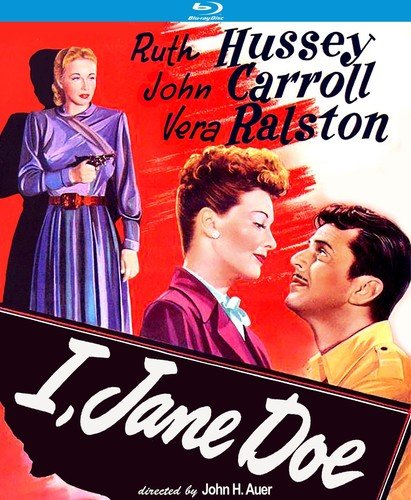