Hold back those tears. The Best Picture nominee Hold Back the Dawn remains a classic romantic weepie, but beneath its glossy veneer lies a substantive examination of a topic that’s still making front-page news 80 years later.

Hold Back the Dawn

We hear a lot these days about all the trouble at our southern border. We hear about asylum-seeking émigrés trying to illegally enter our country, about pregnant women traversing the Rio Grande so they can deliver their babies on American soil, and about the logjam at border checkpoints as potential immigrants clamor for admittance into the land of promise and opportunity. According to our government, this southern border thing is a 21st Century phenomenon, but watch a few minutes of Hold Back the Dawn, an underrated and largely forgotten 1941 romantic drama set in a Mexican border town, and you’ll instantly learn there’s nothing new at all about this particular immigration issue. In fact, the film so incisively reflects our current times, if it wasn’t in black-and-white and didn’t contain some dated Hollywood conventions, you might even think Hold Back the Dawn is a ripped-from-the-headlines tale.

Director Mitchell Leisen’s film also conjures up memories of another classic movie that focuses on displaced persons marooned in a dead-end town impatiently waiting and waiting and waiting for papers and passage into a free, safe country. Sound familiar? Hold Back the Dawn might seem like a shameless ripoff of Casablanca (the hotel where everyone is holed up in the film often resembles Rick’s Café Américain), but the truth is that Paramount released Leisen’s picture a good eight months before Casablanca even started shooting. Though the tangled affections tying up Charles Boyer, Olivia de Havilland, and Paulette Goddard may not rival the sparks flying between Humphrey Bogart, Ingrid Bergman, and Paul Henreid, Hold Back the Dawn – despite its forgotten stepsister status – nevertheless remains an engrossing and emotional motion picture that still holds up extremely well today.

Georges Iscovescu (Boyer) is a Romanian immigrant, part-time dancer, and gigolo extraordinaire who has spent most of his life sponging off of the rich European women he serially seduces. Myriad scandals forced Georges to flee Europe, and because his tarnished reputation precedes him, he feels he might have a better chance finagling entry into the U.S. from Mexico instead. He arrives in a dusty, sun-baked town on the California border and is instantly awed by the 12-foot-high wire fence (yes, we had walls even then) designed to keep unlawful immigrants from flowing into the land of the free and home of the brave. At his interview, a smug Georges is shocked to learn there’s a quota system that limits the number of people from each foreign country who can get visas. Romania’s quota is quite low, and the official tells Georges he should expect to wait between five and eight YEARS to get into America.

Demoralized, Georges checks into the Esperanza Hotel, where other impatient people suspended in limbo wait out their sentences. (When one guest makes a disparaging crack about the U.S., another defends our country with an eloquent reading of the poem that’s etched in stone close to the Statue of Liberty: “Give me your tired, your poor, your huddled masses yearning to breathe free…” It’s especially powerful in light of the recent controversy surrounding that poem’s meaning and whether it accurately reflects our nation’s current policies.) After five months, he runs into his former flame and dancing partner, Anita Dixon (Goddard), who reveals she got around the immigration rigamarole by marrying an American citizen, then quickly divorcing him after she was safely ensconced in the U.S.A. Anita makes it clear she’d like nothing better than to rekindle her relationship with Georges once he gets his visa, so she eagerly coaches him on how to engineer his own matrimonial scam.

Coincidentally, and ironically, it just happens to be the Fourth of July, so a lot of Americans are celebrating the patriotic holiday south of the border. After failing with a few prospects, Georges finally sets his sights on Emmy Brown (de Havilland), a shy, impressionable schoolteacher with schoolgirl ideals who’s chaperoning a group of unruly students on a day trip. Car trouble keeps Emmy and her brood stuck in Mexico overnight, which gives a pro like Georges just enough time to bewitch, manipulate, and marry her. Once the deed is done, the irascible scoundrel looks forward to receiving his immigration papers, dumping Emmy, and seeking fame and fortune with Anita. Emmy, though, truly loves Georges, and as the masquerade progresses and suspicions about the legitimacy of their marriage jeopardize his chance for a visa, he begins to develop feelings for her, too.

Immigration is the film’s lynchpin, and the characters’ constant discussions about its pros and cons strikingly reflect the debate that currently rages in our country. At one point, Emmy tells Georges, “This is America… It’s like a lake, clear and fresh, and it will never get stagnant while new streams are flowing in.” She also tells him one of her parents’ friends harbors doubts about his motives, believing Georges is “just one of those foreigners coming with empty hands to grab from America everything he can.” It’s stunning how a movie made almost 80 years ago can so concisely and accurately express the two sides of one of today’s most pressing and divisive issues.

Hold Back the Dawn is also notable because it marks the last script co-written by Billy Wilder that he did not direct himself. (The following year, Wilder would make his directorial bow with the classic comedy The Major and the Minor, which is scheduled for an extra-special Blu-ray release from Arrow Academy next month.) According to an oft-told story, Wilder and his collaborator Charles Brackett became incensed when Leisen, at Boyer’s request, scrapped a short scene early in the film in which a despondent Georges talks to a cockroach crawling up his hotel room wall. That deletion so enraged Wilder, he vowed never again to let anyone else direct his screenplays… and he never did. The next time you see a cockroach, make sure you thank him (or her) for making all the marvelous Billy Wilder films we’ve enjoyed over the course of many, many decades possible.

In addition to the excellent Wilder/Brackett script, the too often overlooked Leisen – in spite of the perceived cockroach faux pas – weaves a masterful spell. In lesser hands, this tale could have devolved into a maudlin mess, but Leisen consistently elevates it by never losing track of the important social themes that give the movie its meat. I love a good love story, but the best of them are framed against a substantive backdrop, and Leisen makes sure we witness firsthand the plight of aspiring immigrants who seek the freedoms and opportunities the U.S. provides to give their desperate families a better life. A couple of powerful subplots show the struggles and disappointments the less fortunate must endure to gain entry into our great nation, and it’s tough not to equate their inspiring stories with those we see on the news almost daily. Though Leisen is perhaps best known for his light, sophisticated touch (he directed two of Hollywood’s best screwball comedies: Easy Living with Jean Arthur and Midnight with Claudette Colbert), his elegance also enhanced plenty of dramas, especially those with strong female characters. In 1946, he would reunite with de Havilland for To Each His Own, which would win the actress the first of her two leading role Oscars.

She almost got one for Hold Back the Dawn, too. De Havilland plays the stereotypical virgin schoolteacher with customary sincerity, but her rather quick development into a mature woman is delicately and insightfully portrayed. It’s a tricky part, but de Havilland is always believable and often magnetic. Her fine work earned her a well-deserved Best Actress Academy Award nomination, which pitted her against her younger sister, Joan Fontaine, who received a nod – and would ultimately win the prize – for Alfred Hitchcock’s Suspicion. (It would mark the first of only two times sisters would square off in that category. In 1966, Vanessa and Lynn Redgrave would vie for the award, but both would go home empty-handed.) The bitter sibling rivalry between Olivia and Joan was one of Hollywood’s worst kept secrets, and after Fontaine accepted her Oscar, she reportedly received only a handshake and faint smile from her dejected sister, who supposedly muttered to friends that she herself might have won if Suspicion hadn’t slipped under the wire and qualified for Academy consideration at the last minute.

Boyer was born to play Georges and attacks the role with uncommon vigor, filing one of the best performances of his long career. He, too, seamlessly transforms himself, progressing from scoundrel to heel to hero over the film’s course. Leisen showcases the star’s smoldering French scowls and romantic bon mots better than most of his other directors. Boyer creates terrific chemistry with both de Havilland and the sassy, sexy Goddard, who always ignites the screen whenever she appears, which isn’t often enough. (Her thankless role here reminds me of one she played a couple of years earlier in The Women.) Walter Abel also impresses as a hardline border inspector who turns out to be a bit of a softie.

Nominated for six Oscars, including Best Picture and Best Screenplay, Hold Back the Dawn remains a prime example of stellar Golden Age moviemaking. Some elements may seem a bit dated, but the socio-political issues the film addresses continue to be surprisingly – and quite sadly – relevant almost eight decades later. Though it can’t compete with Casablanca, Hold Back the Dawn successfully combines romance, emotion, and dry wit with a fair amount of substance, and the result is a very satisfying film that deserves to be rediscovered and embraced by a wide audience.

Arrow Academy pulls out all the stops for this Blu-ray release, beginning with a lovely 1080p/AVC MPEG-4 transfer struck from a safety duplicate 35mm negative that was scanned in 2k resolution. This rendering of Hold Back the Dawn, presented in its original aspect ratio of 1.37:1, enhances image quality while preserving the film’s integrity and honoring Leo Tover’s Oscar-nominated cinematography. Though far from clean – mild scratches and a smattering of faint vertical lines occasionally plague the picture – the image flaunts terrific contrast, clarity, and gray level variance. Grain is evident but never distracting, background elements are sharp, close-ups nicely highlight fine facial features, and shadow delineation is quite good. Some intermittent softness appears now and then, but that’s to be expected from a 78-year-old film. Still, Hold Back the Dawn has never looked better on home video, and it’s heartening to see this underrated classic receive the care it deserves.

The uncompressed PCM mono track was remastered from the film’s optical negatives and has been nicely cleaned up. No age-related hiss, pops, or crackle disrupt the flow, Victor Young’s Oscar-nominated music score sounds rich and full, and all the dialogue is easy to comprehend. 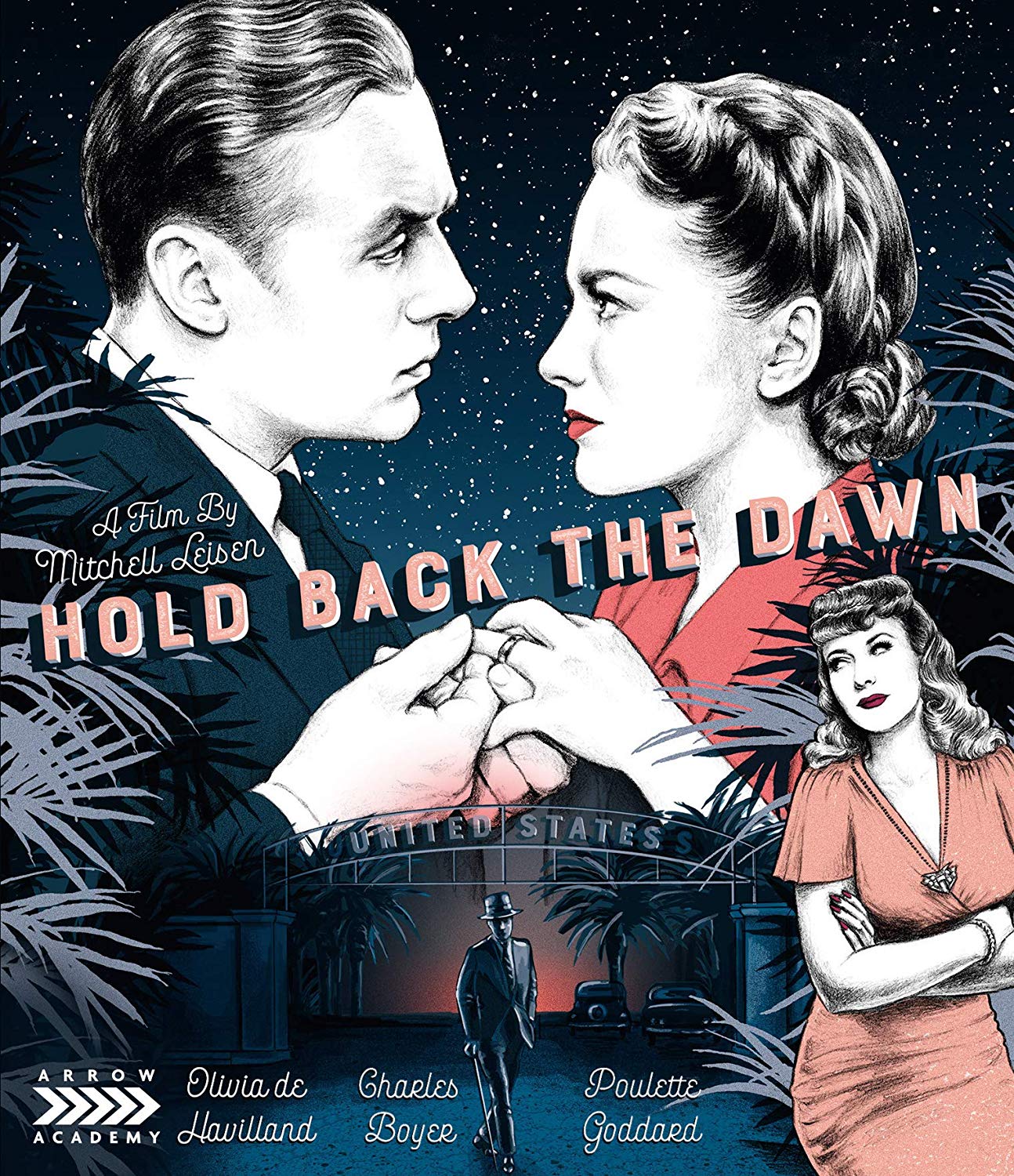 Hold Back the Dawn Blu-ray – Buy at Amazon