A timeless cautionary tale and just a damn good thriller, the low-budget Gun Crazy takes us on a riveting ride into the dark, crooked world of film noir. This crime classic stands as one of the genre’s finest entries and deserves a spot on your must-see list.

I’ve seen countless noirs since I became a classic movie junkie at the tender age of 12 more than 40 years ago, but I somehow missed Gun Crazy. I must shamefully admit that until recently I had never seen one of the most famous B-movie noirs of all time. Now that I have, I can honestly say that this low-budget 1950 thriller, loosely based on the exploits of that dynamic bank-robbing duo Bonnie Parker and Clyde Barrow, lives up to all its hype and then some. Wow, what a great film! Taut, involving, inventive, tough yet elegant, well-acted and well-written (more on that later), and deftly combining style with substance, Gun Crazy captivates from the first frame to the last, holding our gaze and stimulating all our senses. Like the firearm fanatic who falls hard for a sultry, thrill-seeking femme fatale, I am firmly in this film’s seductive grasp.

The opening shot of Gun Crazy shows young Bart Tare (Russ Tamblyn, billed here as Rusty) salivating over a gleaming pistol in a shop window. Mesmerized by the weapon’s violent allure, he impulsively breaks the glass and steals both the gun and some ammunition. The town sheriff, however, instantly foils his crude caper, and the sensitive yet sullen Bart soon finds himself before a judge. When asked about his obsession with guns, he replies, “Shooting’s what I’m good at. It’s the only thing I like. It’s what I want to do when I grow up.” He goes on to say firing a gun makes him feel “awful good inside, like I’m somebody.” Chilling words that perhaps resonate more strongly today than they did almost 70 years ago.

After a four-year stint in reform school and tour of duty in the military, Bart (who has grown into actor John Dall) returns to his hometown. He still loves guns, so when he lays his eyes on sexy sharpshooter Annie Laurie Starr (Peggy Cummins) at a local carnival, he knows he’s met his match. Though smart about guns, Bart is dumb about women, and quickly discovers the two don’t mix. Annie is the first to admit she’s bad to the bone, but Bart foolishly believes he can turn her good. They impulsively marry, but when the high-living Annie blows through Bart’s stash of cash, she convinces him to turn to crime to feed her greed. “I want a lot of things, big things,” she purrs, using her feline wiles to manipulate the reluctant, hopelessly bewitched Bart into an epic robbery spree.

From there, Gun Crazy shifts into high gear and doesn’t take its foot off the gas until its abrupt ending. Director Joseph H. Lewis puts his camera in the thick of the action, lending the story a breathless immediacy that keeps us on the edge of our seats throughout. His work inside automobiles is revelatory for the period. Lewis eschews rear projection for a back-seat camera that records the action in real time. The technique works especially well for a single, lengthy, and largely improvised shot that takes us all the way through a bank robbery, from the drive-up to an unexpected encounter with a police officer and the frenetic getaway. While the you-are-there atmosphere contributes to the movie’s gritty tone, there’s also a tenderness to the doomed love story and a heat to the always prevalent sexual tension that adds welcome complexity and palpable passion to the tale.

Reportedly, and famously, Lewis gave John Dall only one piece of direction: “Your cock’s never been so hard.” Apparently, that was all Dall needed to turn in one of his best performances. Bart is an aw-shucks, likable good guy with a strong moral center (he likes to shoot things, not people), but the heady allure of guns and sex leads him astray. Yet despite his criminal deeds, we’re always firmly in his corner, sympathizing with his dilemmas and dreading what we fear will be his dire fate. Though Dall, who earned a Best Supporting Actor Oscar nomination for The Corn Is Green opposite Bette Davis and memorably played Farley Granger’s homosexual lover in Alfred Hitchcock’s Rope, never attained the stardom he deserved, Gun Crazy secures his place in cinema history. His natural, often heartbreaking portrayal of a man torn apart by the conflicting forces of lust, power, fear, and conscience complements Cummins’ sassy, smoldering presence well.

The lean, fluid screenplay is also exceptionally good. Co-writer MacKinlay Kantor had recently written The Best Years of Our Lives, and his collaborator, Millard Kaufman, would pen Bad Day at Black Rock a few years later. Unless you research Gun Crazy, you’d never know that Kaufman really didn’t contribute to the script at all. Rather, he was a front for the notorious blacklisted writer Dalton Trumbo, who famously ran afoul of the House UnAmerican Activities Committee for supposed Communist leanings a couple of years before. It was the exiled Trumbo who surreptitiously polished the screenplay (most likely from his bathtub in Mexico) and gave it much of its zing… just one more fascinating element of a fascinating film.

As the great novelist James Ellroy (L.A. Confidential) so eloquently states in the documentary included on the disc, film noir “exposits one great theme, and that theme is you’re fucked.” Gun Crazy espouses that dark, devastating message to a fare-thee-well as it flawlessly executes all of the genre’s classic components. Like the best noirs, Gun Crazy, which has rightfully earned its place on the National Film Registry, leaves us feeling as if we’ve been punched in the gut. Along with the pain, there’s a high that comes from watching an exhilarating and finely crafted piece of raw, blistering entertainment.

Warner Archive continues to treat its classics catalogue with the utmost care, and the superior transfer of Gun Crazy reflects that commitment to quality. The 1080p/AVC MPEG-4 rendering looks remarkably crisp yet consistently filmic, with terrific contrast, rich black levels, and a finely graded gray scale combining to produce a vibrant, detailed picture. Close-ups are especially strong. Some grain supplies essential texture, and only a few errant specks dot the pristine source material. Though some scenes appear slightly soft, the overall presentation is very impressive indeed.

The DTS-HD Master Audio 2.0 mono track supplies clear, well-modulated sound and has been scrubbed clean of any age-related hiss, pops, or crackle. Effects like gunfire, revving car engines, and screechy wheels are distinct, dialogue is easy to comprehend, and a wide dynamic range gives Victor Young’s music score plenty of room to breathe.

Supplements include an audio commentary by Glenn Erickson (a.k.a. DVD Savant, now CineSavant) and a comprehensive 77-minute documentary called Film Noir: Bringing Darkness to Light, which features film clips galore from scads of noir classics, as well as cogent analysis from an army of cinema writers and craftsmen. 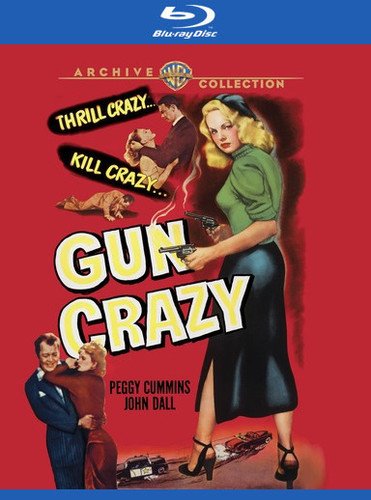