Gaslights may be obsolete, but the verb inspired by those flickering flames – and George Cukor’s classic 1944 thriller – is still very much in vogue today. Seventy-five years after its premiere, Gaslight remains a finely crafted, riveting exercise in psychological suspense, and Warner Archive’s top-notch Blu-ray stylishly salutes it.

The term “gaslighting” has become part of our vernacular, but not in its literal sense. Though the gas-powered lamps that illuminated society during the Victorian era served a practical purpose, the figurative definition of the word remains relevant today… and for that we have director George Cukor’s 1944 thriller to thank. Gaslight slickly chronicles one man’s systematic and insidious plot to drive his fragile wife insane, and the film so captivated the imaginations of a fascinated public, it coined its very own verb.

To “gaslight” someone is to psychologically manipulate a person for nefarious reasons, and in Cukor’s movie, the purposeful dimming of the gas-powered lights in the bedroom of Paula Anton (Ingrid Bergman) both mirrors and fuels her declining mental capacity and grip on reality. Paula’s seemingly sympathetic husband Gregory (Charles Boyer) keeps his ailing wife a virtual prisoner in their swanky London townhouse while playing a series of mental tricks on her designed to undermine her confidence, sap her energy, and cause severe emotional distress. As Paula crumbles, the devious motives behind her spouse’s cruel and unusual treatment of her become clearer. Is Paula strong enough to fight back and can Scotland Yard detective Brian Cameron (Joseph Cotten) – who’s been investigating the years-old unsolved murder of Paula’s rich aunt – unravel Gregory’s deceitful web before it’s too late?

Based on a very successful play called Angel Street by Patrick Hamilton (the Broadway production ran for more than 1,200 performances and gave Vincent Price the opportunity to play his first villain), Gaslight isn’t a whodunit, but rather a why-dunit. Almost from the get-go, Gregory shows his true stripes, but it takes a while to discover the motivations behind his despicable, ruthless, and sadistic behavior. The Oscar-nominated screenplay by John Van Druten (who also wrote the thriller Night Must Fall, as well as the original play upon which the musical Cabaret is based), Walter Reisch, and John L. Balderston (who wrote the screenplays for the original Dracula and Frankenstein films) slowly builds tension as it depicts with delicious delicacy the deft sleights of hand that cause Paula so much internal strife. Because we know Gregory is her tormentor and the film’s focus is so intimate and claustrophobic, at times we feel like victims too, which makes us crave Gregory’s comeuppance all the more.

Gaslight is the only thriller Cukor ever directed, and he approaches the material from a psychological angle. While it would be easy to get wrapped up in the story’s atmospherics and construct a tale built solely around genre conventions, Cukor takes the road less traveled, emphasizing the subtleties of personal relationships, the power of emotional attachments, and significance of seemingly minor acts to ramp up suspense. The result is a slow-burn, character-driven yarn with an understated style that builds into a highly effective piece of entertainment.

In addition to receiving an Oscar nomination for Best Picture, Gaslight racked up six other nods, including one for Boyer as Best Actor. (He lost to Bing Crosby in Going My Way, which also took home the Best Picture prize.) The legendary romantic lead uses his French accent and sophisticated charm to seduce both Bergman and the audience, but once he brandishes his villainous side, there’s no ambiguity in his portrayal. Gregory is a master manipulator and rotten to the core, and Boyer completely embraces his reprehensible character.

Gaslight also marked the film debut of 17-year-old Angela Lansbury, who nabbed a Best Supporting Actress Oscar nomination for her sparkling portrayal of a sassy, pouty, Cockney maid who brazenly flirts with Gregory. Lansbury instantly proves that she’s a magnetic cinematic force with a maturity well beyond her tender age, and she doesn’t seem at all intimidated in her scenes with Boyer and Bergman. The delightful, doddering Dame May Whitty also shines as a nosy neighbor whose morbid fascination with the mysterious goings-on in the Anton household provides some welcome comic relief.

Since Gaslight premiered three-quarters of a century ago, countless movies, TV shows, and daytime soaps have copied its plot, but none have come close to matching the power, elegance, and intelligence of Cukor’s film. Gregory may try to make Paula believe she’s forgotten things, but you’ll never forget Gaslight once you’ve seen it. It’s insanely good.

Films set in the Victorian era usually burst with atmosphere, so a crisp, sleek transfer is necessary to highlight all the ornate details. Warner Archive complies with a terrific 1080p/AVC MPEG-4 encode that features top-notch contrast and clarity, as well as wonderfully graded grays. Presented in its original aspect ratio of 1.37:1, Gaslight boasts a natural grain structure that preserves both the movie’s celluloid feel and the integrity of Joseph Ruttenberg’s Oscar-nominated cinematography. The film won a well-deserved Best Art Direction/Interior Decoration Academy Award, and all the intricately patterned wallpaper, upholstery fabrics, and carefully chosen Victorian clutter, including bric-a-brac, paintings, vases, and of course gas lamps are well rendered. Rich black levels heighten the eerie mood, superior shadow delineation maintains tension, and glamorous close-ups showcase Bergman’s beauty (even when she’s looking pale and haggard, she’s still gorgeous), Boyer’s prominent, pulsating forehead vein, and Lansbury’s peaches-and-cream complexion. Best of all, no nicks, marks, or scratches sully the pristine source material. Without question, this is the best Gaslight has ever looked on home video. If you’re a fan of this classic thriller, an upgrade is a must.

The DTS-HD Master Audio 2.0 mono track maximizes all the atmospheric effects that make suspense movies so effective. In addition, Bronislau Kaper’s musical score sounds rich and full. All the dialogue – even whispered exchanges – is easy to comprehend. No age-related hiss, pops, or crackle intrude.

All the supplements from the 2004 DVD have been ported over to this Blu-ray release. The most noteworthy extra is the 1940 British version of Gaslight starring Anton Walbrook and Diana Wynyard, which is far more efficient (it runs 30 minutes shorter than its Hollywood counterpart) and much more overt in its presentation than the Cukor version. There’s even less ambiguity in Walbrook’s portrayal of the domineering, manipulative husband, and the film’s tone is far more sinister. The script also transforms the flirtation between Walbrook’s character and the promiscuous maid, Nancy (Cathleen Cordell), into a full-blown tryst. Wynyard’s performance rivals Bergman’s, and though Paula’s relationship with her husband isn’t nearly as well developed in the British version, and the dashing Joseph Cotten character is replaced by a tubby grandfatherly type, the tension is equally taut and an omnipresent layer of gauzy fog enhances the creepy atmosphere. I wasn’t expecting much from this version, but found myself quite engrossed by it. The source material doesn’t look nearly as good as the glossier MGM version, but it’s certainly serviceable. In fact, we’re lucky the 1940 edition of Gaslight exists at all, as MGM sought to have all the prints destroyed after the studio released its highly lauded 1944 version. Thank goodness that plan was unsuccessful.

Other supplements include a 2004 retrospective featurette that has lovely reminiscences from Lansbury about her film debut, a brief newsreel clip that shows actress Jennifer Jones presenting Bergman with her first Best Actress Oscar, and the film’s re-release theatrical trailer. 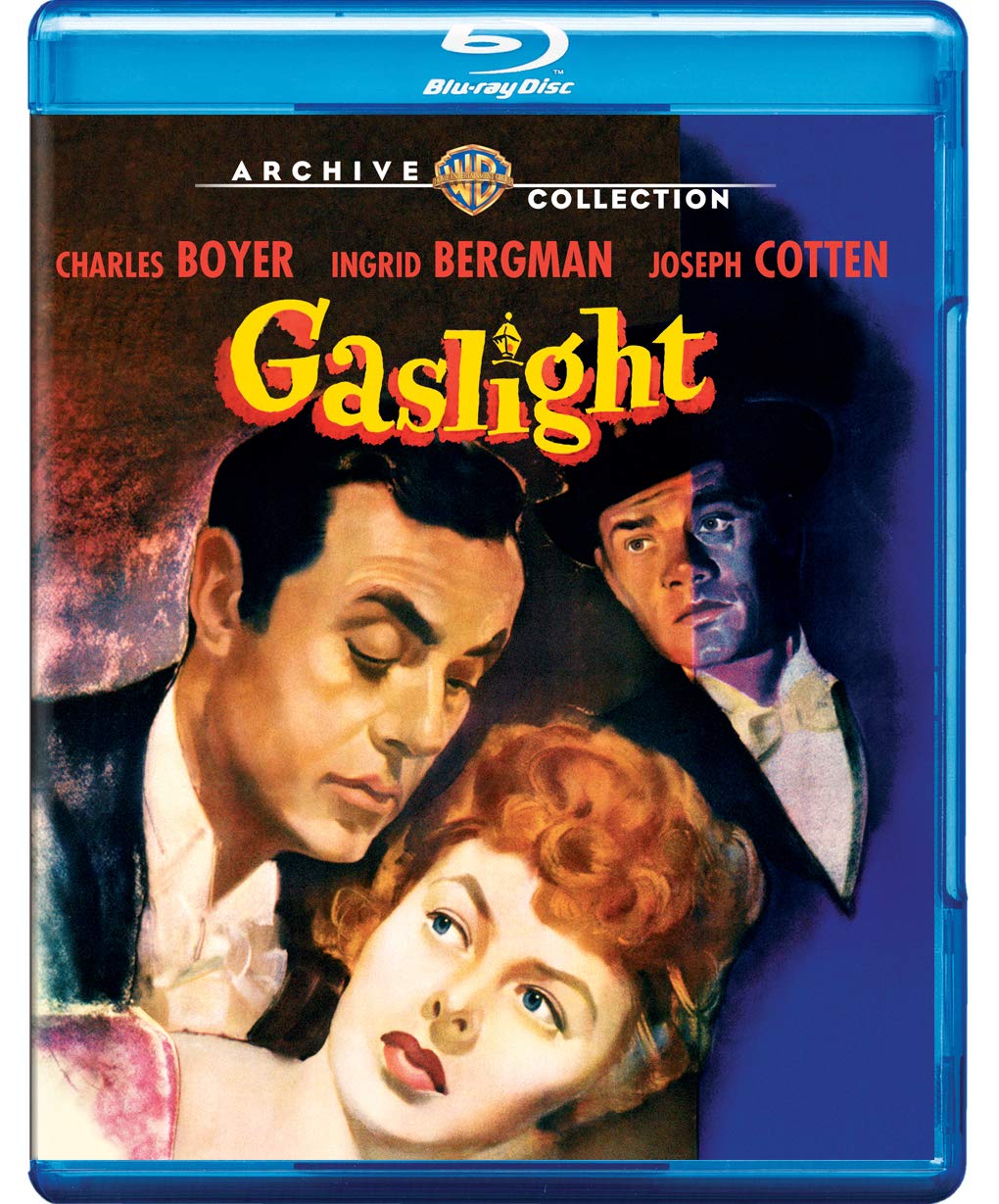