The closest thing to an acid trip in 1930s Hollywood was a Busby Berkeley musical number, and Footlight Parade is one of the filmmaker’s most potent hallucinogens.

Poor Lloyd Bacon. Lloyd who? Exactly. The journeyman director helmed a couple of groundbreaking Hollywood musicals (42nd Street and Footlight Parade) in the early 1930s, but ask even serious classic film buffs who directed those pictures and they’ll likely say Busby Berkeley. That’s not entirely incorrect, because Berkeley, a former Broadway choreographer who revolutionized the movie musical by devising ingenious kaleidoscopic set-pieces that transformed chorus lines into geometric shapes and patterns, conceived the musical sequences in both films. He also directed them in Footlight Parade, and because they grab all the attention, he gets the credit for the whole film.

Maybe that’s as it should be. Without Berkeley’s awe-inspiring handiwork, Footlight Parade would be just another stale, dime-a-dozen backstage musical. (Sorry, Mr. Bacon.) His creations elevate not just this movie, but the entire musical genre, which was all but dead before the brazen Berkeley put his personal stamp on it and resuscitated the form. Berkeley took the camera where it never had gone before, lifting it up and away to a bird’s-eye perch, and thanks to a bevy of contorting chorus girls down below, fashioned an array of eye-popping fantasies that captivated Depression-era audiences desperate for escape. In the blink of an eye, a static, dull genre became an art form, and the renaissance would last a generation. Though Berkeley is also famous for directing almost all of the Mickey Rooney/Judy Garland backyard musicals later in his career, he made his mark and cemented his reputation with a handful of Warner extravaganzas in the early 1930s.

Footlight Parade is one of his most lavish concoctions, and the addition of the charismatic James Cagney to the Warner musical stock company led by hoofer Ruby Keeler and crooner Dick Powell further buoys the film. Already a major star thanks to his electrifying performance in the pre-Code gangster flick The Public Enemy, Cagney lends the proceedings a much-needed jolt with his patented pugnacity and boundless energy. He also surprised his fans – who heretofore only knew him as an on-screen tough guy – by unveiling his considerable toe-tapping talent. A veteran of vaudeville and Broadway musicals, the pint-sized dynamo could dance up a storm, and almost a decade before he wowed audiences and won a Best Actor Oscar as George M. Cohan in Yankee Doodle Dandy, Cagney shows off his fleet feet here.

Unfortunately, the movie’s weak storyline puts a damper on his coming out party. Footlight Parade marked Warner’s third 1933 backstage foray (after 42nd Street and Gold Diggers of 1933), and though it contains a few fresh elements, the tale of a feisty impresario (Cagney) who must battle embezzlers and an in-house spy who leaks all his ideas to a theatrical rival possesses a formulaic feel. For about the first 70 minutes, the narrative stumbles along, constantly retracing its steps as it mixes romance with showbiz skullduggery, but aside from one cringe-inducing production number, the feline-themed “Sittin’ on a Backyard Fence” (you’ll better appreciate the creepy visual effects in Cats after you watch it), there isn’t much music in this musical.

That all changes on a dime, however, when three massively scaled numbers go back-to-back-to-back, comprising the final third of the film with almost no linking dialogue. As a result, Footlight Parade often feels like two separate movies – one with a plot and a dash of music and the other with music and a dash of plot. So much for balance and cohesion.

Berkeley, though, outdoes himself with this trio of intricate, flawlessly executed tableaux. First comes the surprisingly risqué “Honeymoon Hotel,” followed by the fiercely imaginative “By a Waterfall,” which stands as one of Berkeley’s most mind-blowing creations. No other number better exemplifies Depression-era escapism or Berkeley’s genius. With astounding creativity, he designs a spectacular water ballet marked by synchronistic, serpentine formations, revolutionary underwater photography, and a mammoth aquatic set-piece that looks like a prototype for Disneyland’s Splash Mountain. The number reportedly received a standing ovation at the film’s premiere, and must be seen to be believed.

Hot on its heels comes “Shanghai Lil,” which begins in a brothel and features a full-scale barroom brawl before evolving into a shameless flag-waving salute to both America and FDR, replete with rifle drills, marches, and patriotic formations. Cagney gets a chance to brandish both his tap shoes and fists in this robust finale, which caps a solid half hour of mind-blowing musical fantasy.

I love Keeler’s fresh-faced innocence (nobody says a line like “Gee, that’s swell!” with more earnestness and enthusiasm), but I’ve never felt her dancing was very graceful. Light on her feet Keeler definitely is not, but what she lacks in finesse, she makes up for in spirit. Keeler pounds out tap routines like her life depends on it, performing with such vigor it’s tough not to feel sorry for the scuffed-up floor beneath her feet. She and Powell make a terrific team. Footlight Parade would be the third of seven films they would make together, and they personify pure, gooey young love.

Joan Blondell, who performed the powerful “My Forgotten Man” finale in Gold Diggers of 1933, doesn’t get to sing at all in Footlight Parade (which is a shame), but she shines as Cagney’s spunky, long-suffering assistant who holds a blazing torch for the brash producer. Blondell, who would marry Powell a few years later, wields a wisecrack like a whipsaw, and her dressing down of Claire Dodd as Cagney’s sexy and conniving flame is one of the movie’s highlights. “As long as they’ve got sidewalks, you’ve got a job,” Blondell memorably barks at her.

Footlight Parade coasts on a subpar story, but that allows the monumental inspirations of Busby Berkeley to take center stage in this routine backstage musical. They steal the show, of course, and whet our appetite for more fantastical visions from this visionaryfilmmaker. Back in 2006, Warner released a five-film DVD collection of Berkeley’s greatest Warner musicals. We can only hope that someday a similar set will showcase Berkeley on Blu-ray.

Warner Archive’s high-quality 1080p/AVC MPEG-4 transfer was struck from a new 2k remaster that infuses new life into this 86-year-old motion picture. The wonderfully film-like presentation features remarkable contrast and clarity, rich black levels, stable whites, and nicely varied grays. Transitions err on the fuzzy side and a slight bit of image instability occasionally occurs, but that’s to be expected for a movie of this vintage. Close-ups are surprisingly crisp, background elements are easy to discern, and only a few errant marks dot the print. Best of all, the lavish musical numbers look spectacular in high definition.

The DTS-HD Master Audio 2.0 mono track produces clear, well-modulated sound. Age-related surface noise is absent, all the sassy dialogue is easy to comprehend, and the musical score is full and robust. At times, the dialogue can sound a little tinny and shrill, but that’s typical of the period due to primitive recording equipment. Disc supplements include a retrospective featurette, two vintage shorts, four vintage cartoons (two of which are built around songs from the movie), and a trailer. 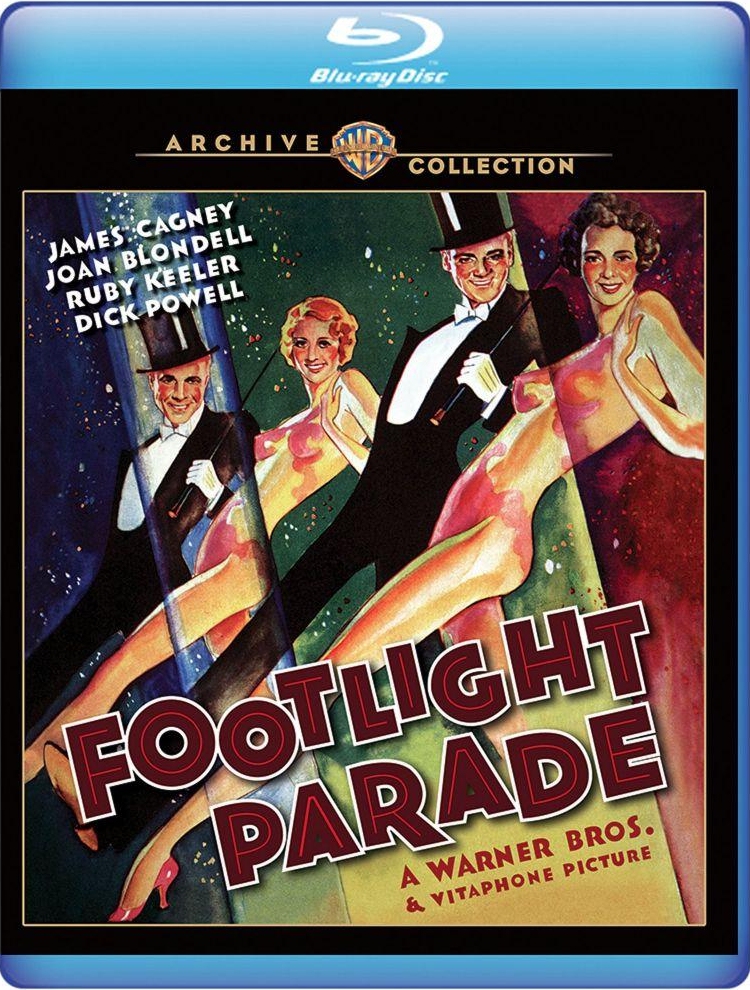