Down Three Dark Streets pulls back the curtain on the FBI as it chronicles a trio of investigations in a semi-documentary style. Broderick Crawford and Ruth Roman star in this splintered tale that’s salvaged by an array of fine performances and a knockout finale.

Just as 1947’s T-Men provided an inside look at the undercover operations of the U.S. Treasury Department, Down Three Dark Streets attempts to do the same with the Federal Bureau of Investigation. Director Arnold Laven’s 1954 just-the-facts-ma’am mystery combines a semi-documentary style with a police procedural narrative and some film noir accents to create a tough, no-nonsense account of three concurrent FBI investigations. Though the cases aren’t particularly intricate and the outcomes are all too predictable, the movie’s realistic focus keeps us involved. Down Three Dark Streets isn’t as absorbing or artistic as T-Men (by a long shot), but like the FBI agents it salutes, it gets the job done with a minimum of fuss.

The authoritative voice of a narrator takes us on a step-by-step tour of FBI processes as the three investigations begin to take shape. One involves a killer on the run and the ditzy, materialistic girlfriend (Martha Hyer) who might hold the key to his whereabouts. Another revolves around a small-time racketeer (Gene Reynolds) with possible connections to a larger crime syndicate and his concerned, blind wife (Marisa Pavan) who fears he may be in over his head. The film’s central story, however, concerns Kate Martell (Ruth Roman), a young widow and mother who begins receiving threatening phone calls from a mysterious extortionist. The distorted voice on the other end of the line promises to harm Kate’s six-year-old daughter if she doesn’t turn over the $10,000 cash payout from her late husband’s life insurance policy.

Frightened and alone, Kate quickly contacts the FBI for help, but when the agent who’s managing all three cases is gunned down on the job, it’s up to his supervisor, John “Rip” Ripley (Broderick Crawford), to match the killer to the correct investigation. Wrapping up three cases in 85 minutes is ambitious even by episodic TV standards, but the script by The Gordons (crime fiction authors Gordon Gordon and Mildren Nixon Gordon) with Bernard C. Schoenfeld neatly ties them all up without making the agents break much of a sweat. If only real-life cases could be so easily cracked!

The relative weakness of the various storylines diminishes the film’s impact, but just when we’re ready to wash our hands of the whole enterprise, Down Three Dark Streets surprises us with a humdinger of a climax that’s worthy of Hitchcock. It all transpires on the treacherous terrain at the base of the famed Hollywood Sign that’s nestled in the hills above Los Angeles. The thrilling sequence only lasts a few short minutes, but it looks like it was shot on location and puts some much-needed flourish on the end of a run-of-the-mill movie.

Crawford won a Best Actor Oscar a few years earlier for his blustery portrayal of a loudmouth, larger-than-life politician in All the King’s Men, but he’s quiet as a mouse and stiff as a board most of the time here. Maybe that’s appropriate. His FBI agent barely shows any emotion, rarely cracks a smile, and only periodically puts any inflection in his voice. It’s a realistic, if frustratingly sedate portrayal, and contrasts nicely with the rest of the cast’s more agitated performances.

Roman is quite effective as the tortured Kate, who’s always on the verge of breaking down, but somehow manages to hold herself together. As a harried widow who must juggle a full-time job, a young daughter, a lascivious live-in relative, child care, and a creepy assailant who manipulates her like a puppeteer, she’s both believable and contemporary. Hyer puts a fresh spin on the stereotypical sexy blonde floozie by adding some emotional dimension, while Pavan projects plenty of warmth and spunk as the loyal immigrant wife who confronts her husband’s ruthless crime boss (a young and menacing Claude Akins) despite her visual infirmity.

It’s tempting to compare Down Three Dark Streets with T-Men. Both traverse similar territory, but the latter’s inventive shot compositions and stunning imagery, care of director Anthony Mann and cinematographer extraordinaire John Alton, far outclass the more utilitarian approach Laven and his director of photography, Joseph Biroc, bring to Down Three Dark Streets. The talented Biroc would win an Oscar 20 years later for The Towering Inferno, but save for a tension-filled nocturnal scene in a deserted cemetery, his work here often appears dull and flat. Such a look may be fitting for an FBI procedural, but unfortunately the film’s story isn’t thrilling enough to pick up the sensory slack. That’s why, despite all it has going for it, Down Three Dark Streets never quite rises above the mundane.

Down Three Dark Streets (or Down 3 Dark Streets, as the poster art and disc packaging spell it) arrives on Blu-ray in its original aspect ratio of 1.75:1. Unlike 5 Steps to Danger, the other Ruth Roman feature released by ClassicFlix, no mention is made on the back cover about the source material’s origin or any kind of restoration. As such, it’s not surprising that this 1080p/AVC MPEG-4 transfer is markedly inferior to the other film. Print damage is the main offender. The source is littered with nicks, marks, and scratches, which vary in intensity throughout the presentation. Some stretches remain quite clean, but a few scenes are pretty banged-up. Otherwise, this rendering looks very good, despite some intermittent softness. Grain is evident but not overpowering, excellent contrast and clarity bring the narrative to life, and close-ups show off fine facial details well. Rich black levels heighten the noir feel and a nicely varied gray scale provides essential image shading.

The DTS-HD Master Audio 1.0 track supplies clear, well-modulated sound. Like the video, no clean-up seems to have been performed on the soundtrack. Surface noise is noticeable, especially during some quiet stretches, but it’s not very pronounced. Effects are distinct, the music is full-bodied, and all the dialogue is easy to understand. Sadly, no supplements are included on the disc. 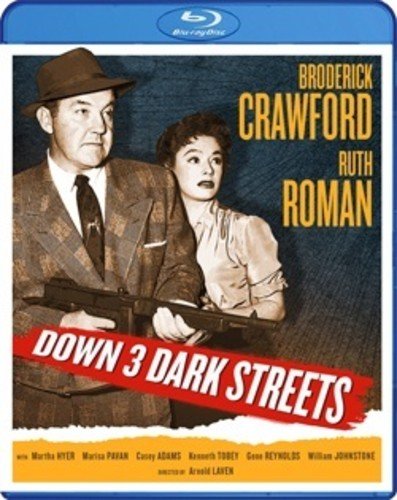