This tuneful take on Calamity Jane, Wild Bill Hickok, and the dangerous town of Deadwood is a whole lot more wholesome than HBO’s beloved series and only for diehard Doris Day devotees. It’s a calamity, all right!

If you believe its namesake HBO series, the frontier town of Deadwood was a dark and dangerous place back in the 1870s. Violence, power struggles, lawlessness, and very colorful profanity were commonplace, yet Hollywood didn’t always depict the South Dakota outpost in such a severe light. While its rough-and-tumble, lawless, gunslinging reputation doesn’t exactly scream Technicolor musical, that didn’t stop Warner Bros. from building a tuneful showcase around the town and two of its most famous residents, Calamity Jane and Wild Bill Hickok. This romanticized vision of Deadwood tones down its tensions and paints the town as a boisterous borough populated by rowdy, rootin’-tootin’ cowboys who only seem to care about booze and women.

In honor of the new Deadwood movie premiering on HBO and the late, great Doris Day, who passed away a couple of weeks ago at the ripe old age of 97, we thought it might be a hoot to take a look back at 1953’s Calamity Jane, a fairly calamitous musical that’s a cross between Annie Get Your Gun and Pygmalion. Unfortunately, it wasn’t. Several spirited songs by Sammy Fain and Paul Francis Webster bolster the appeal of this broad, slapstick musical, including the Oscar-winning ballad “Secret Love,” but the dumb plot sinks the picture like a stone.

Day is nothing short of exhausting as the title heroine, a spunky-to-the-max sharpshooter who struts around Deadwood with a spring in her step (half the time, she looks like she has ants in her pants) and a mouth as loud as a blowhorn. She looks like Daniel Boone and acts so masculine, most of the men in town treat her like one of the boys. That includes Wild Bill Hickok (Howard Keel), who isn’t the least bit wild here; in fact, he’s about as bland as a slice of dry white toast. Bill and Jane bicker and spar, but beneath the barbs and zingers, a camaraderie and mutual respect ground their friendship, which of course blossoms into love late in the film.

There’s not much plot, and the script by James O’Hanlon isn’t very fresh or interesting. Not surprisingly, the Jane depicted here is a far cry from the one who populates HBO’s Deadwood. Despite her swagger and gumption, this Jane is pure as the driven snow and shockingly naïve. I mean, she’s Doris Day, for heaven’s sake! She has to be! A female rival (winningly played by Allyn Ann McLerie) brings out her girly side and gussies Jane up enough to turn Bill’s head, but the transformation is too quick and drastic to be believable. Exposing Jane’s softer side allows Day to turn on some much-needed charm, which helps the film shift from annoying to syrupy during its last act.

Director David Butler helmed several Shirley Temple movies earlier in his career and had previously worked with Day on a few occasions as well. His style is slick and formulaic, but he knows his way around a musical number. As a result, the songs are welcome respites from the silly, vapid story. Keel, however, doesn’t get to sing nearly enough, and often seems more like a supporting player than Day’s co-star. (Warner Bros. obviously didn’t respect him as much as his home studio MGM did. Keel would headline that studio’s sparkling adaptation of the Broadway smash Kiss Me, Kate the very same year.) Also of note, a young, dashing Philip Carey plays the lieutenant Jane pines after before realizing that Wild Bill is her guy. Carey’s film career never really took off, but he made quite a splash on daytime TV, playing rascally patriarch Asa Buchanan on the popular ABC soap opera One Life to Live for at least a couple of decades.

Though Calamity Jane is available on Blu-ray, I streamed it in HD via iTunes. The picture quality is quite nice, with vivid colors filling the screen and excellent contrast and clarity distinguishing the presentation. A few shots appear slightly soft, but the source material is in tip-top shape. The 2.0 mono track exhibits some surface noise, but it’s not particularly noticeable. All the songs sound appropriately robust, all the dialogue is easy to comprehend, and no distortion creeps into the mix. A rental costs only $2.99, and frankly, I wouldn’t pay any more for this middling musical. It’s far from Day’s finest hour, and HBO’s Deadwood surely paints a more compelling portrait of Jane, Wild Bill, and the town itself. 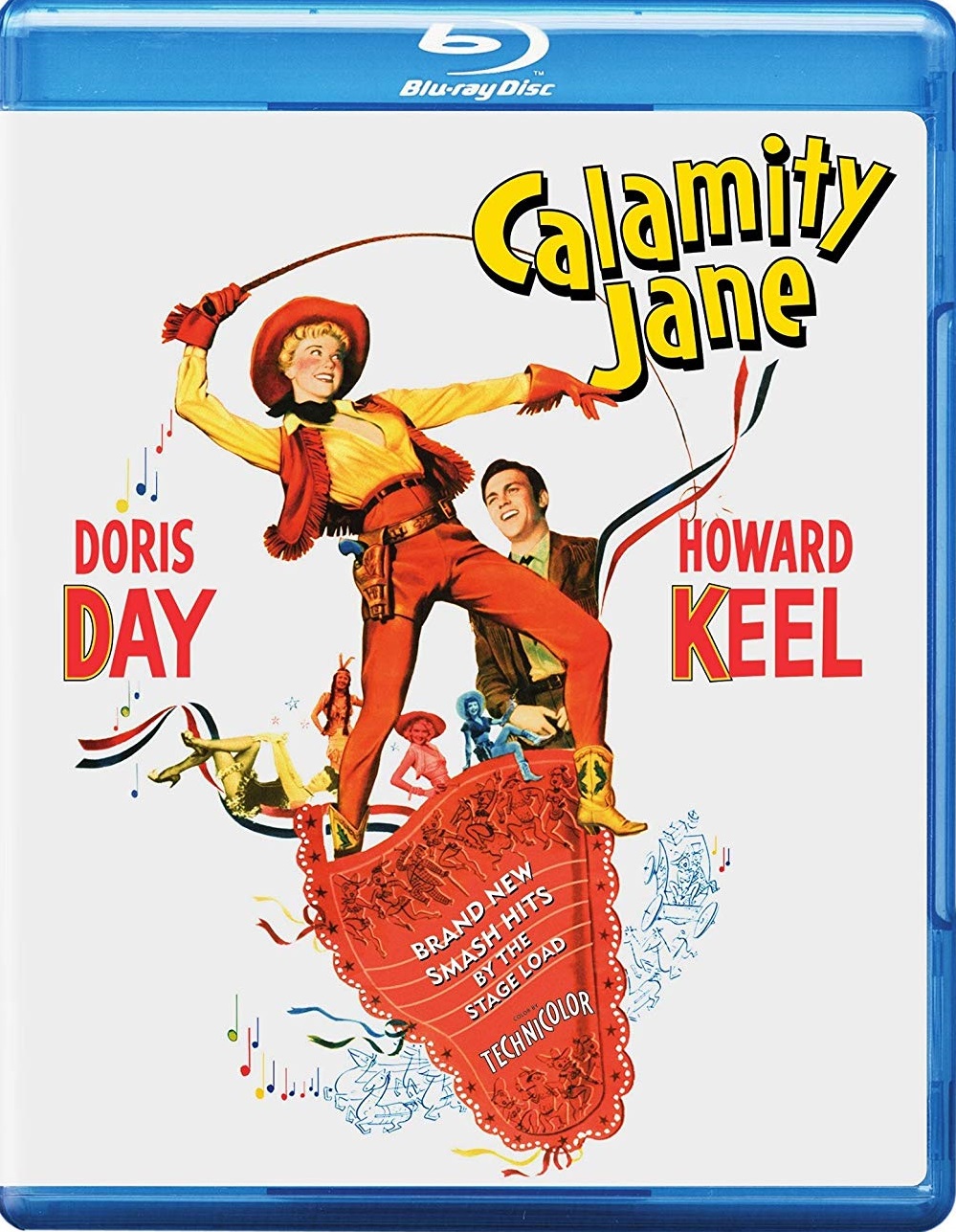