Beyond a Reasonable Doubt is beyond preposterous from a story standpoint, but all the grit and toughness we expect from director Fritz Lang are on full display in his final American film. Though it pales when compared to The Woman in the Window and While the City Sleeps, this popcorn thriller still keeps us engaged, if only to see how its crazy plot wraps up.

Beyond a Reasonable Doubt addresses an important issue, but its ridiculously outlandish story ends up overshadowing and trivializing its potent message. Director Fritz Lang tries his best to inject this ludicrous tale with his customary fire and fury, but even his considerable talents can’t redeem the narrative. Though moments of suspense and surprise distinguish Lang’s final American film, Beyond a Reasonable Doubt doesn’t live up to either expectations or the director’s best work.

Newspaper publisher Austin Spencer (Sidney Blackmer) is an ardent capital punishment opponent. When a criminal convicted solely on the basis of circumstantial evidence is executed in the electric chair, he hatches a plan to expose what he believes to be an unjust and inhumane practice. Sounds good so far, right? The scheme he concocts is so fantastical, no one in their right mind would go along with it… and no audience would buy it.

Spencer wants to prove that any average joe could be executed for a crime he didn’t commit, so he proposes to methodically mount a circumstantial case against an innocent man in an unsolved murder. How? By planting easily misconstrued evidence at the crime scene, putting the man in compromising and incriminating positions, and having him behave suspiciously – all of which would lead the bloodthirsty District Attorney (Philip Bourneuf) to order his arrest, seek a conviction, and argue for the death penalty. To protect the innocent man, Spencer would photographically document the ruse along the way, so at the eleventh hour he could expose the injustice, exonerate the wrongly accused killer, and shame the overzealous D.A.

Novelist Tom Garrett (Dana Andrews), the fiancé of Spencer’s daughter Susan (Joan Fontaine), agrees to be the guinea pig in this “foolproof” gimmick, hoping it will provide fodder for his next book. Perfectly plausible, right? I mean, what writer wouldn’t risk execution in the electric chair to get some juicy material? Of course, the plan hits a major snag, but because it’s so tightly stitched, it doesn’t unravel like it should.

More than once while I was watching Beyond a Reasonable Doubt, I found myself shaking my head in disbelief. I’m all for undercover investigations, but the film takes that noble practice to the extreme, to say the least. I don’t expect a film-noir plot to be airtight or even 100% believable, but this is just nuts!

Lang goes all-in, and to his credit, makes the ridiculous absorbing. A master storyteller, he builds tension with the precision of Hitchcock, but there’s only so much you can do with subpar material. The script by Douglas Morrow (who won an Oscar a few years earlier for The Stratton Story) rarely rings true. Sadly, the film’s very admirable, socially conscious theme quickly gets buried under the weight of its stupid narrative. The twist ending, which tries to justify the plot, not only feels like a cheat, it also nullifies the movie’s underlying argument, and the actors often look like they’re not buying it either. Andrews appears uncharacteristically bored throughout, and the chemistry between him and Fontaine is chilly at best.

Beyond a Reasonable Doubt was shot in just 21 days and looks it. A rushed, haphazard feeling pervades the film, and it possesses little of the seething energy Lang brought to the far better and more substantive While the City Sleeps, released just months earlier. Still, despite its faults, the 1956 version of Beyond a Reasonable Doubt remains a guilty pleasure, and there’s no doubt it’s light years ahead of the unspeakably bad 2009 remake starring Jesse Metcalfe and Michael Douglas. Next to that embarrassing debacle, this mediocre, over-the-top thriller could be called a masterpiece.

Presented in a 2.0:1 SuperScope aspect ratio, the 1080p/AVC MPEG-4 transfer doesn’t look quite as spiffy as Warner Archive’s rendering of Lang’s While the City Sleeps, but is still pleasing overall. The biggest issue is an abundance of grain that occasionally diffuses the picture’s clarity and lends solid backgrounds a snowy, noisy appearance. The look is jarring at first, but never distracting enough to take us out of the film. On the plus side, the source material is in good shape, with only a few errant nicks and marks cropping up. Contrast is solid, a nicely varied gray scale enhances details and depth, close-ups are crisp, blacks are rich, and shadow delineation is fine. I can’t imagine Beyond a Reasonable Doubt looking any better than it does here, and that’s in spite of the excessive grain.

The DTS-HD Master Audio 2.0 mono track pumps out clear, well-modulated sound that’s free of any age-related hiss, pops, or crackle. The melodramatic musical score fills the room with ease, all the dialogue is easy to understand, and a wide dynamic range keeps distortion at bay.

The only disc supplement is the film’s original theatrical trailer, which gives away way too much of the plot. By all means, steer clear of it until after you’ve seen the movie. 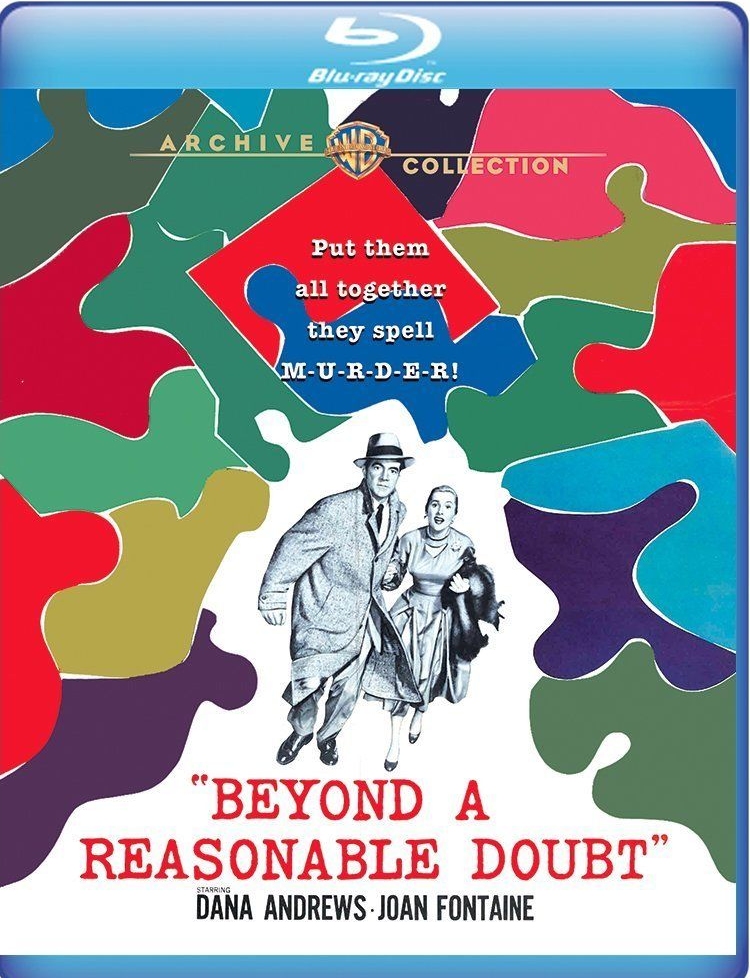 Beyond a Reasonable Doubt Blu-ray – Buy at Amazon