Still creepy after all these years, Village of the Damned epitomizes the type of top-notch, low-budget horror film that unnerved audiences in the 1950s and ’60s. It’s just disturbing enough to give us nightmares today… and tonight.

Village of the Damned

“Beware the stare that will paralyze the world” was the catchphrase for Village of the Damned, a nifty little horror film about demon children who terrorize a rural British town. Their hypnotic gaze allows these eerily placid, blonde-haired automatons to exercise insidious mind control over those who cross them and render others helpless to halt their dastardly deeds. In the vein of Invasion of the Body Snatchers and a precursor to Rosemary’s Baby and The Omen, director Wolf Rilla’s low-budget chiller exploits our paranoia and latent xenophobia as it chronicles the infiltration of an alien race into our smug, ordered society.

As the film opens, a mysterious phenomenon afflicts the sleepy fictional village of Midwich, England. All the townspeople lose consciousness at the same exact moment and remain comatose for several hours. Law enforcement is baffled by this dead zone, but when the villagers awake, they seem to have suffered no ill effects. A few weeks later, Anthea Zellaby (Barbara Shelley) joyfully announces to her much-older husband Gordon (George Sanders) that she’s pregnant. The couple’s elation, however, evaporates when they discover that every other young woman in the village is also carrying a child, including a traumatized teenager who swears she’s still a virgin.

When all the children are born, they look suspiciously alike, with fair skin, blonde hair, and penetrating eyes. At first, they seem normal, but as they mature, their cold attitudes, withdrawn nature, superior intellect, and ruthless survival instincts make them a formidable force in the community that both taunts and fears them. If ever they feel threatened, the gang of children, led by Gordon’s son David (Martin Stephens), telepathically assaults their adversaries, reading their minds and controlling their actions. Violence and death ensue. As time passes, their powers and ambitions grow, putting not only Midwich, but quite possibly the rest of the world at risk.

For decades, possessed children have fueled plenty of freakish yarns, but Village of the Damned just might be the film that started it all. The kids are wonderfully creepy, especially ring-leader Stephens, who would appear alongside Deborah Kerr in one of the all-time great horror movies, The Innocents, a year later. With his monotonic line deliveries and vacant expressions, Stephens is one diabolical little dude, and his catatonic partners in terror are equally menacing. (Interestingly, another Stephens – Harvey Stephens – played the devil child in The Omen 16 years later, but the two are not related.)

A last-minute replacement for Ronald Colman, who died before production commenced, Sanders brings a veddy British stiff upper lip to his stoic, intellectual role. Though it’s always hard to divorce him from the acid-tongued Addison DeWitt in All About Eve, the iconic part that won him a well-deserved Best Supporting Actor Oscar, the blasé Sanders is the perfect foil for the cold-blooded mutant spawn.

Shot in black-and-white, which heightens suspense and emphasizes the tale’s bleak nature, Village of the Damned effectively blends sci-fi and horror elements as it casts its sinister spell. The slow-burn screenplay is methodically yet efficiently plotted, and a few shocking moments make indelible impressions. Still, if you’re looking for a jump-out-and-scare-you flick, this might not be your cup of Earl Grey. With its spooky, supernatural tone, Village of the Damned is more of a get-under-your-skin thriller that frightens with ideas as well as images. As a result, it just might keep haunting you long after you see it. Remember, beware the stare…

Warner Archive’s 1080p/AVC MPEG-4 presentation looks quite nice, with good clarity, contrast, and gray scale variance producing a detailed, vibrant picture. Solid backgrounds like the sky occasionally exhibit some noise, but those instances are brief and don’t detract from the transfer’s overall quality. Grain is nicely integrated, black levels are deep, close-ups are crisp, and the special effects blend seamlessly into the action. (The enhanced clarity calls more attention to a few freeze frames, but that’s to be expected.) Best of all, the print is free of any age-related nicks, marks, or scratches.

The DTS-HD Master Audio 2.0 mono track is also quite clean. The eerie sci-fi effects are well rendered, all the dialogue is easy to understand, and the musical score sounds rich and full. The only disc supplements are an audio commentary by author Steve Haberman and the movie’s original theatrical trailer. 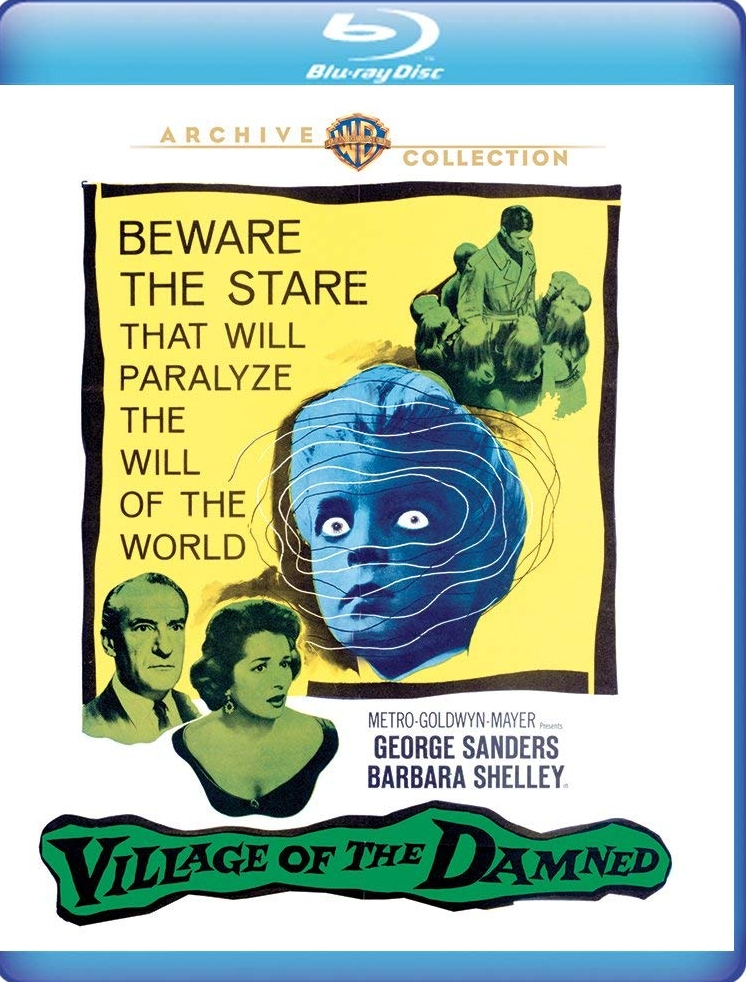 Village of the Damned Blu-ray – Buy on Amazon