In the banner image above, the Sega Megalo 410 proudly displays several of its features, including Dynamic Sound and View. For a time, I was able to bring this mid-’90s arcade cabinet kicking and screaming into both my home and into the modern age of gaming.

A few years ago, I got the notion in mind that it might be pretty cool to own an arcade cabinet. I became familiar with Neo Geo cabinets, and the idea of having a cabinet that was not limited to one game, but was a system that could play tons of old game boards. Naturally, in an era of LCD monitors, the sheer bulk of a CRT arcade cabinet is troublesome to move and to live with. Likewise, if the monitor goes out, the cabinet becomes something of a massive paperweight. These concerns about functionality made me want to get something classic like a ‘Donkey Kong’ cabinet that would look good even if it were no longer working.

I had been looking at arcade cabinets for about a year when the Megalo practically fell into my lap. I met a guy desperate to unload some arcade machines. He worked at a kids’ party place out in the country and was in charge of arcade machines that were left to die. He had a storage unit filled with exotic Japanese machines, most of them so broken and so complicated that they straddled the line between curiosity and junk. The next thing I knew, I wound up with a cabinet with a 40″ Hitachi projection monitor that had to be rammed through doorways to make it into my house.

The Megalo was priced so cheaply that I bought it without knowing if it worked or if it could be repaired. I knew a few things about it, though. I knew that it used a JAMMA system. I also knew that the control set-up was not ideal. It has one arcade stick with four buttons and a start button – a basic single player set-up. Unlike most cabinets, however, that control panel was standardized. It was the same Sega standard used in the popular ‘Blast City’ candy cabinets, and I figured that I could somehow get a template of the control panel that I needed.

When arcade cabinets were at their zenith, they used a standardized system referred to as JAMMA. If you had a JAMMA cabinet, then you could play JAMMA boards. By the 1990s, most games used the JAMMA standard. A friend loaned me ‘Final Fight Revenge’, and lo and behold, the cabinet worked! I think even then, as I played through the truly awful ‘Final Fight Revenge’ and marveled that the Megalo still functioned, I knew that arcade boards were not what I wanted. What I wanted was to bridge the past with the present. I wanted a classic, dedicated cabinet that played today’s games as well as relics from the past.

This presented two separate roadblocks, the display and the controls. The ultimate goal was to play ‘Street Fighter 4’ versus mode on the cabinet. The Megalo is a Japanese product from the mid-’90s, and nailing down helpful information generally only elicits failure from the likes of Google. What I wanted to do was outside of the original design anyway. Comments from people on the internet and around my office said that the Megalo was too tricky to modify, but that just spurned me on in a spiteful way.

On the outside and back of the Megalo’s mighty fiberglass, steel and plastic case, hidden under four screws and a steel plate, I found a VGA port, ostensibly used in order to link two Megalos together for a very luxurious versus mode. After some further inspection and trial and error, I traced the VGA cable to a board of VGA ports within the Megalo. One of these ports allowed me to output a carefully modulated signal from a PC. While this capability is enough to make a MAME machine, my goal was to play ‘Street Fighter 4’. At the time, ‘Street Fighter 4’ was available only on the PS3 and 360, and the task of building controls is entirely suited towards the PS3.

From a company in Canada, I found a cable that could output VGA and analog sound from both a PS3 and a Wii. From a different company, I acquired a newly cut, stainless steel two-player, twelve-button control panel. With so many people suddenly building and modifying arcade sticks, there was a shortage of parts, and I had to buy the Sanwa buttons and sticks off of Craigslist.

The Playstation 2 was (and in developing parts of the world still is) an immensely popular piece of hardware. As a result, there are adapters for Playstation 2 controllers that allow their use on many different consoles, including the PS3, PC, GameCube and Dreamcast. I chose two GameStop branded controllers and set about converting them into the cabinet’s two-player, twelve-button control set-up. Using principles similar to purchasing and setting up my home theater, I matched everything I could for the two player set-up: identical sticks, buttons, controller converters, PCBs (the PS2 controllers), even down to the wiring gauge. It was an entire Saturday of work, with occasional trips to the electronic parts store. A friend helped me to steady the wire, PCB, solder and soldering iron. 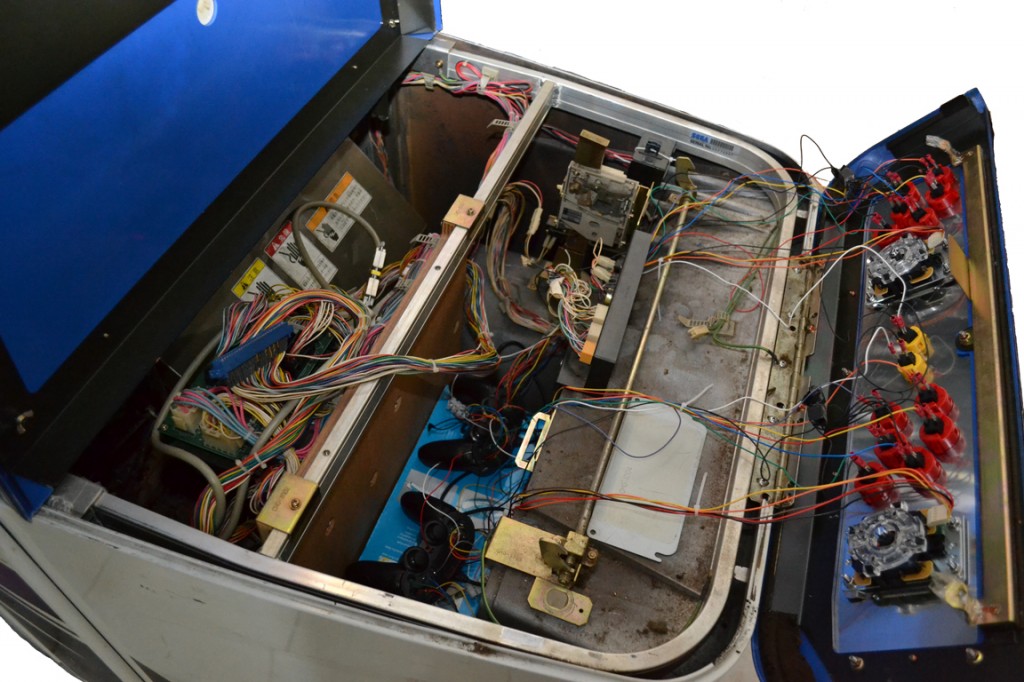 The result was a fusion of PS3 and Megalo, and while it was excellent for many different games (even ‘Peggle’ worked great), the majority of its use was for ‘Street Fighter 3’, ‘Street Fighter 4’, and ‘Super Street Fighter 4’. I played people online all over the world, and it was easy to sink hours into it when friends visited. 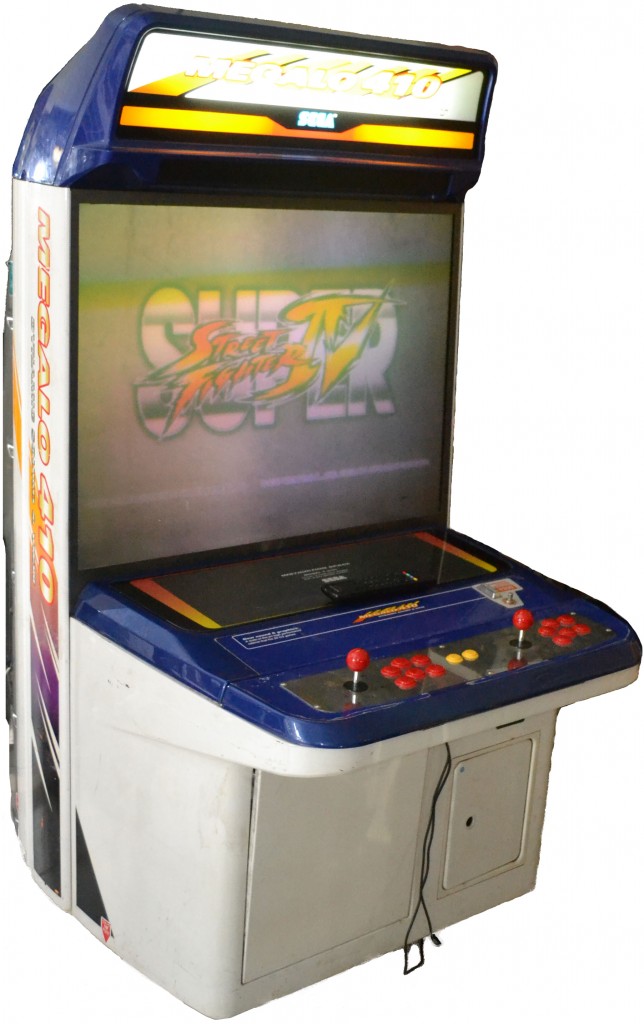 For some time, a co-worker and I used our lunch hours to grab fast food and twenty or so minutes of VS before dashing back to work. Another time, I had a buddy in from overseas, and after everyone else had retired, we stayed up for hours playing the night before his flight back. Indeed, while I don’t have many good pictures of the Megalo, I do have some good memories. I think my heart skipped a beat once when I was working on the Megalo, and had some panels open. In a moment of distraction, a cat crawled inside and narrowly avoided contacting the deadly cathode ray tube. Another time, after I managed to acquire a remote for the Hitachi display, I was left fumbling through Japanese buttons and test patterns as I tried to adjust the picture. Even remembering the moment when I noticed that “INSERT COINS” was subtly burned into the screen makes me smile.

When it was time to sell my house, I first had to sell the Megalo. The difficulty in moving the Megalo, the acumen necessary to operate it, and the space it required all meant that finding a buyer would be tricky. The guy who ended up buying it was just getting into arcade machines and really wasn’t sure what he wanted to do with it. I included everything that I had bought or fabricated for it, and the cabinet left in a cleaner and even more capable condition than when I had first obtained it.

Ultimately, as I recall the experience of owning my Sega Megalo 410, I can only hope that others will get a shot at the awesomeness of the arcade legend, resplendent in all its steel and fiberglass glory.