In the first few seconds of ‘Scott Pilgrim vs. the World,’ Edgar Wright’s whirligig film adaptation of Bryan Lee O’Malley’s comic book series, the Universal globe creeps across the screen. It’s the familiar logo, except that its edges are jagged. Instead of the blustery orchestral accompaniment, it sounds (and looks) more like a videogame. In these moments, before the movie has even properly begun, the tone is set – this is a movie set inside its own pop culture kaleidoscope, where movies crash into videogames and come out the other side altogether different. If you’re rolling your eyes at this, then you’ve already checked out of the movie. Might as well go out to the lobby to find out when the next screening of ‘Salt‘ is playing.

‘Scott Pilgrim vs. the World’ has a rather simple story at its core: Scott Pilgrim (Michael Cera) is an aimless twenty-something living in Toronto. He shares a crummy apartment with his gay friend Wallace Wells (Kieran Culkin, stealing every scene). And he’s sort-of dating a teenager named Knives Chau (Ellen Wong). He plays in a raucous indie rock band called Sex Bob-omb (itself a reference to early ‘Mario Bros.’ games). Scott’s “precious little life” is turned upside down when he meets the mysterious Ramona Flowers (Mary Elizabeth Winstead), a girl who wears goggles on her head and changes her hair color every week and a half. Of course, this means navigating the tricky emotional minefield of breaking up with Knives, and the even trickier minefield of battling Ramona’s seven evil exes for the girl’s heart.

This is sort of like the trials and tribulations aspect of a typical romantic comedy but expanded to a decidedly cartoonish degree. Literally. Every movement is accompanied by a graphic sound effect. When Knives pronounces her love for Scott in an indie record store, it comes out as a plume of noxious pink smoke. Later, when Ramona and Scott kiss, their lip lock produces sparks of heart-shaped confetti. 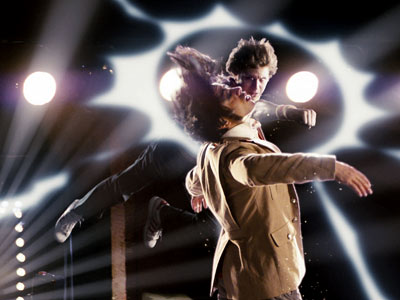 Once Scott comes in contact with Ramona’s evil exes, the fights take on an even larger videogame feel. All of her exes (such as a skateboarder-turned-actor played by Chris Evans and a music producer played by Jason Schwartzman) offhandedly possess superpowers. In my favorite “boss battle,” Scott’s band plays against a pair of evil exes who are also musicians. They battle across a dance floor via huge, swirling monsters. Oh, and when Scott fells the exes, they explode into a shower of glittery coins.

Edgar Wright has always been an uncanny master of the genre mash-up, from his zombie rom-com ‘Shaun of the Dead‘ to his action comedy by way of Agatha Christie ‘Hot Fuzz.’ ‘Scott Pilgrim’ might be his boldest experiment yet. Wright spent almost a year in post production, tweaking constantly to get the comic-book-meets-videogame-meets-action-movie-meets-sitcom feel right. The film moves so quickly and has so many amazing visual embellishments that I wanted to stop the movie, pause it and rewind it, because I was sure I was missing something. It assaults and dazzles at the same time.

In this crazy pop culture mélange, it has something unique and resonant to say about the current generation of twenty-somethings. (People over the age of 30 are sure to be mystified.) This is a culture that has grown up on videogames and movies, which have not only shaped the way they think and live, but also the way they interact and experience love. I’m hesitant to call ‘Scott Pilgrim vs. the World’ our generation’s ‘Annie Hall’ – a romantic comedy that defines (and is defined by) the culture – but, well, I’ll go ahead and call it our generation’s ‘Annie Hall.’ Sure, it’s messy, but so is love. Being based on a six-part comic book series means that it doesn’t follow the familiar three-act narrative beats. But the movie leaves you with something more, something emotional, that you never quite expect. The resonance of the film is its ultimate “one up.” It’s also what makes ‘Scott Pilgrim’ a certifiable masterpiece, instead of something that’s just really, really cool. But, you know, it’s that too.