It’s kind of a surprise that more movies haven’t been modeled after the ‘Bourne‘ franchise. After all, these are the films that more or less redefined the way that action movies are shot and edited today. The last two, directed by Paul Greengrass, folded the genre into a kind of filmic cubism. Let’s be honest: ‘Casino Royale‘ wouldn’t have been the kick-ass shot-on-the-arm that it was if it hadn’t shamelessly ripped off the ‘Bourne’ pictures. Yet content-wise, not many movies have touched the “amnesiac or out of touch spy has to come to his or her senses while dispatching a bunch of heavily armed goons” formula. Until now. ‘Salt,’ the big-budget Sony movie directed by action movie stalwart Phillip Noyce and starring Angelina Jolie, is the most naked ‘Bourne’ knock-off yet. Except, you know, with boobs. 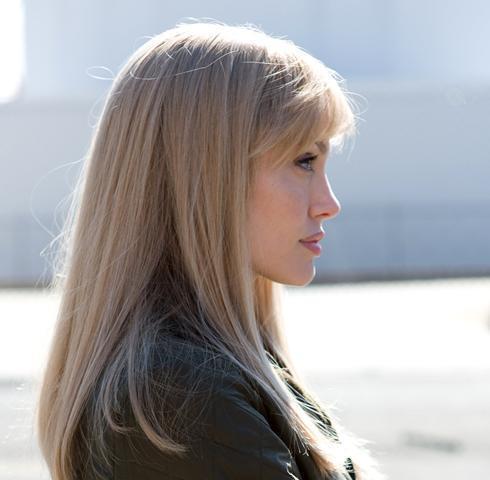 The movie opens, dramatically, with our protagonist Evelyn Salt (Jolie) getting tortured in some North Korean hell-hole. Abruptly, she’s rescued. As she’s ushered out of said hell-hole, she makes contact with her point man Winter (Liev Schreiber), who tells her that it wasn’t the CIA that wanted her back so badly, but rather her nerdy spider scientist boyfriend (August Diehl). This is supposed to make some emotional connection with the audience in a very punchy, shorthand type of way. Instead, it just makes us wonder, “She’s really hot, so why is she with that nerdy spider scientist?” (A question which, by the way, never gets answered.) Anyway, flash forward a few years and she is now married to said nerdy spider scientist. (It’s her anniversary, even!) Then trouble waltzes in the door of her super secret CIA office… literally. Orlov (Daniel Olbrychski) saunters in and proclaims himself a Russian spy. Big whoop, right? But here’s the kicker: he unleashes an incredibly convoluted tale of historical intrigue. Apparently, the Russian government, in a secret plot that dates back as far as the JFK assassination, has been training Russian sleeper cells to blend into everyday American life waiting for the day to strike! And today is that day! And guess what the name of the Russian agent who’s destined to kill the Russian President is? Evelyn Salt! Gasp! Or something!

From there, all hell breaks loose. A by-the-books counter intelligence agent named Peabody (Chiwetel Ejiofor, continuing the grand tradition of ‘Salt’ cast members with names that are incredibly hard to spell) is on her ass, and she’s forced to break out of the sleek, high security office barefoot! Can you imagine? Well, yes you can, because Jason Bourne does this shit in his sleep. And Bruce Willis was a barefoot action hero a million years ago in the first ‘Die Hard.’ So Salt has a few things to accomplish: find her dear husband, who appears to have been abducted; clear her good, soldierly name; and figure out whether or not she is, you know, a big fat Russian spy.

If you care about any of these issues, then you’re doing better than me. I was bored silly almost from moment one.

Clearly, this was pitched as “We’ll do Bourne as a woman!” (This idea was hatched after Tom Cruise turned down the script, originally titled ‘Edwin Salt.’) In that order, we have scenes where Salt takes off her high-heels, covers up a security camera with her pantyhose, and patches a bullet wound with a maxi-pad. Yes, I’m serious. And no, it’s never mentioned in the movie ever again. For a woman with a bullet wound, she never slows down. And neither does the movie. Which is its main problem.

‘Salt’ was shot by Robert Elswit (‘There Will Be Blood‘), but you wouldn’t know it by the photography’s grainy blues and grays. The movie never stops long enough to catch its breath. Since it doesn’t, save for some hastily edited flashback sequences to various parts of Salt’s life (spoiler alert: she really is a Russian spy… snooze), we’ve only got some mildly amusing action sequences and tons of poorly choreographed mayhem to hold our attention. Most of the actors, many of them very good, are just window dressing. It’s Jolie who’s most burdened. She’s forced to leap, prance, duck, and shoot, without much motivation or, for us, without much reason to give a shit. Despite some recent developments in the news, the Russian spy shtick is as tired as the day is long, and the whole thing is like a pile-up of tired ideas and stale imitation. Yes, ‘Bourne’ was chiefly influential, and yes, it would nice to see the other side of that gender coin, but ‘Salt’ is just lousy. A movie this drab could use a little spice.