The past couple years have seen an outpouring of retro-style action figures based on movie and TV licenses – most prominently Funko’s expansive ReAction line (of which I have mixed feelings). This fad has reached perhaps its strangest incarnation yet with new 3.5-inch versions of Tina Fey and Amy Poehler sitting at the ‘Saturday Night Live’ Weekend Update desk.

This ‘SNL’ playset, complete with diorama replica of the ‘SNL’ news set, comes from company Bif Bang Pow!. The product will be sold as an exclusive by retailer Entertainment Earth, which has (per usual) plastered the only available images of it with obnoxious watermarks. 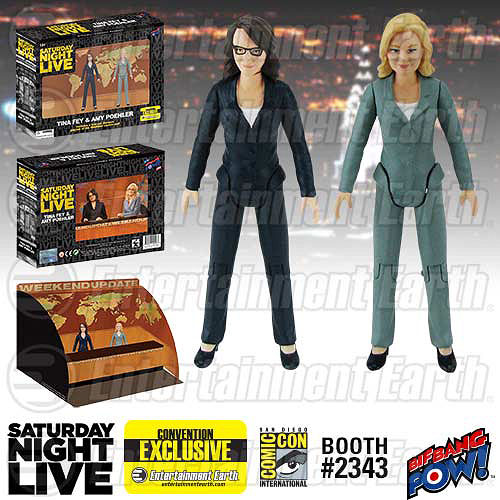 I wish I could get a clearer look at the toys. From what I can see, the sculpting quality doesn’t really look great, and I have no idea what’s going on with the weird articulation design at the hips. Even so, the likenesses are still better than most of Funko’s ReAction figures. For the surprisingly reasonable asking price of $29.99 as a complete set, I think they’re pretty neat.

I’m a little confused as to why the listing claims that these are 3.5-inch scale, when the usual standard is 3.75 inches. Is that a typo, or will be these be shorter than G.I. Joe, Star Wars and other similar action figures?

Regardless of the answer to that, here’s the big catch: Although the Entertainment Earth web site offers an option to preorder the Weekend Update playset, the item is intended to be first and foremost a Comic-Con exclusive with a limited run of only 2,400 pieces. Convention attendees will get first dibs, and if all 2,400 units sell out there, the online preorders will be canceled. Preorders will only be honored on a first-come-first-served basis if the company still has any leftovers after the convention.

NOTE: This item will first be sold at San Diego Comic-Con 2015 at the Entertainment Earth Booth #2343. If supplies remain after the show, your order will be filled and shipped to you then, during the first week of August, 2015.

That seems pretty unlikely to me, but if you’d like to try anyway, I’d recommend placing a preorder soon.