The latest board game from designer Antoine Bauza (of ‘7 Wonders’, ‘Ghost Stories’ and ‘Tokaido’ fame) is now available in hobby stores. Keep reading to see why this little cooperative gem based on Akira Kurosawa’s ‘Seven Samurai‘ is worth adding to your game shelf.

In ‘Samurai Spirit’, a tower defense style board game published by FunForge, up to seven ronin… errr, players… must work together in order to save a village under siege by the dreaded Oni-Musha clan. These fierce raiders want nothing more than to see the entire place burn to the ground, and it’s the duty of the honorable samurai warriors to stop them, at all costs.

The game box has a very elegant design with black edges and an explosion of color on the top. It’s also fairly small (only 8″ x 8″ x 2″), making it highly portable. But don’t be fooled by its tiny stature. There’s a lot of game in this compact little package. 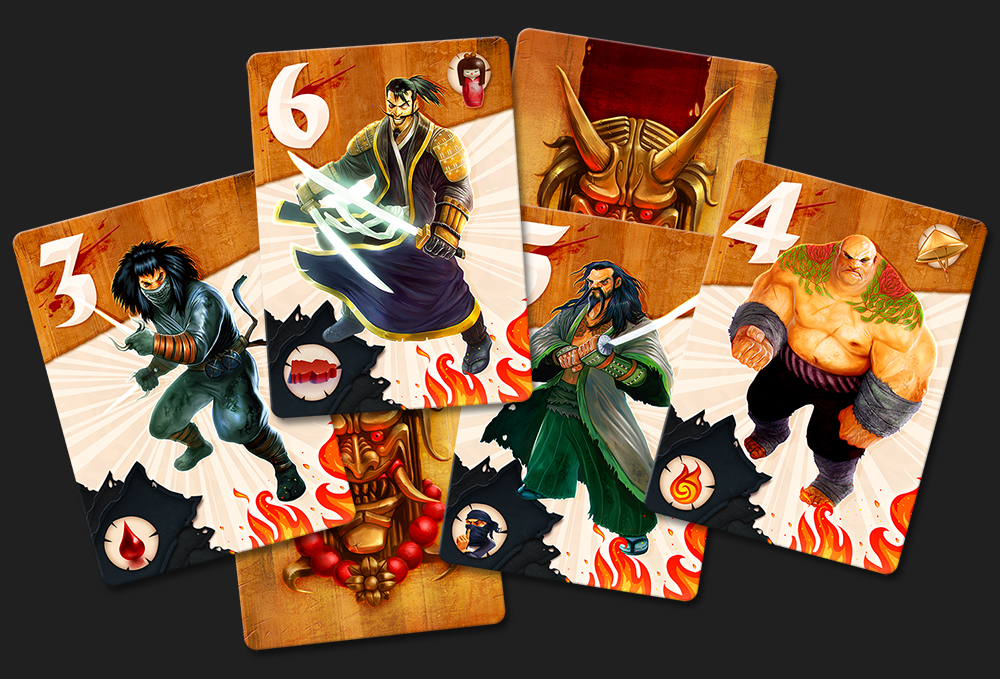 Components include a rules booklet, a village game board, seven samurai player boards, seven wooden samurai meeples, a deck of raider cards, and several cardboard tokens. The contents are also neatly packed inside a molded plastic insert to keep them from rattling around too much. What I really like is that the section of the insert that houses the raider cards is large enough to hold the majority of them comfortably in sleeves. In fact, it’s possible to squeeze them all in if one is extra-careful, but since you’d likely want to keep the few lieutenant and boss cards separated anyway (I keep mine in a pair of mini Zip-locs on top of the player boards), it almost feels like it was designed this way on purpose.

The goal of the game is basically for the samurai – and the village they’ve sworn to protect – to survive. To do this, players must fend off an entire army of invaders by plowing through and ultimately depleting the raider deck. The raiders, however, won’t go down easily. Not only will they do nasty stuff to you all game long, they come in three – yes, three – waves. Facing these buggers once is bad enough, and each wave is progressively harder than the last, as lieutenants and big bad bosses join the fray in subsequent rounds.

Raiders are fought by drawing the top card of the deck and choosing to either confront or defend against that particular card on your turn. Confronting is a push-your-luck way of dealing with raiders along the same lines as playing Blackjack. Confronting enough baddies can activate a samurai’s Kiai (more on that later) or possibly even knock them out for the round. Defending, on the other hand, involves matching one of three icons found on both raiders and samurai: Peasants (hat), Farmsteads (farm) and Families (doll). Players need to acquire all three types in a round, otherwise they face penalties for failing to do so. Defending is also a good way to handle some of the more troublesome foes, but be warned, a samurai can only defend against one raider of each type in each wave. 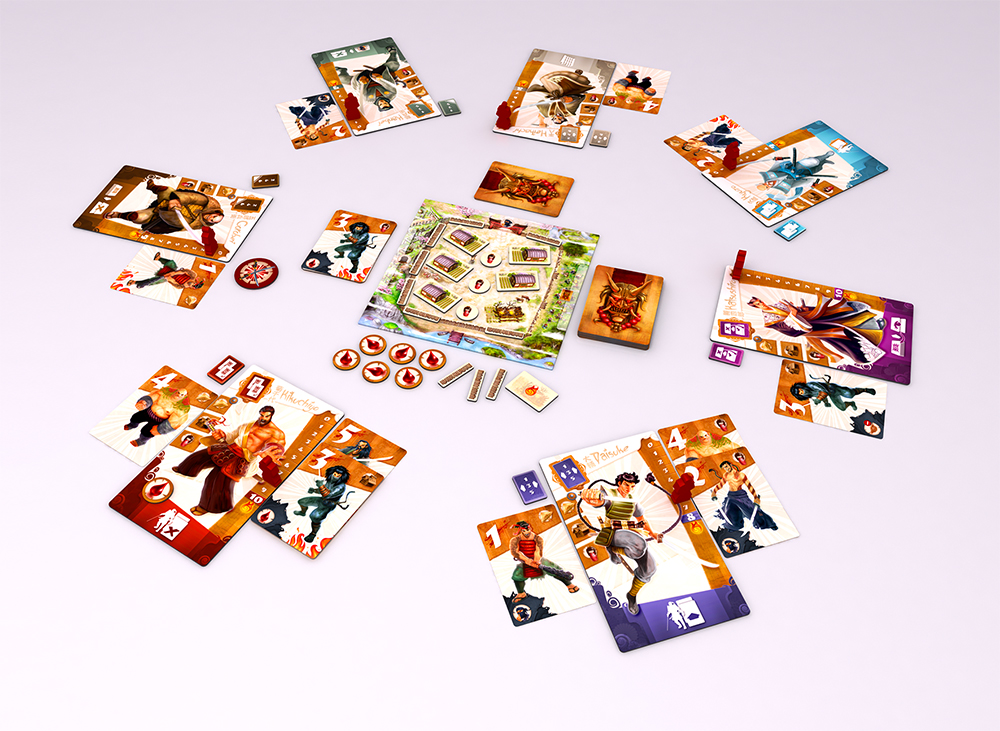 The village board is comprised of three elements: Families, Farmsteads, and Barricades. Each of these is represented by a number of tokens that the enemy can wipe out during the raid. If that happens, it really doesn’t bode well for the players. Only barricades can be rebuilt by some effects and abilities, and losing too many families and farms can potentially hinder players and even cause them to lose the game.

Each player takes on the role of one of the seven included samurai, either by choice or at random, and the samurai player boards have a few different features on them of importance. On the right side of the board is a battle track, where the meeples are used to keep a running tally of a samurai’s progress confronting raiders. On the left, you’ll find the trio of icons mentioned earlier for use when defending. Lastly, each samurai has a pair of unique special abilities that help give these outnumbered bushido a fighting chance. 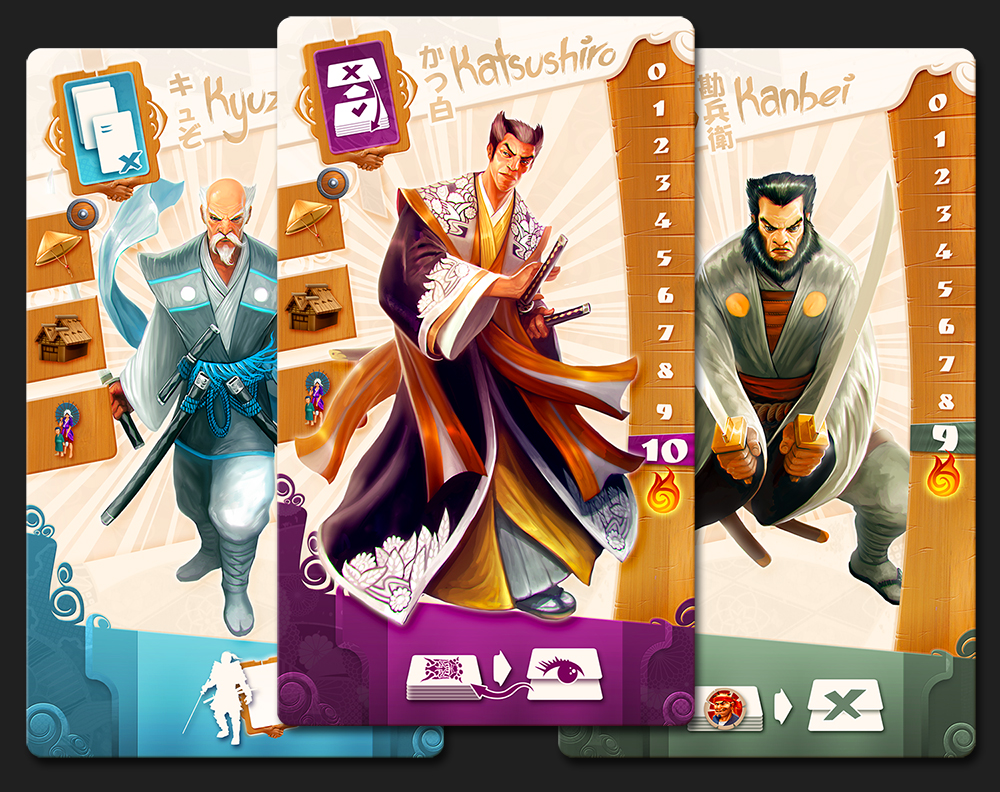 The samurai’s first special ability is his talent, indicated by an icon located in the upper left corner of the board. For example, Katsushiro’s talent (the purple rectangle) signifies that it allows him to place a raider he just he drew on the bottom of the raider deck and draw a new one (which must be kept). Talents can also be lent to other players during the game, however doing so opens the door for intruders. This can be positive, as it thins out the number of raiders the group must face (by taking the top card in the raider deck and forming a new intruder stack), but it could come back to haunt you. Every intruder has a chance of destroying barricades and/or farms at the end of every round.

The other power in each samurai’s arsenal is known as the Kiai – represented by the icon at the bottom of the board. Kiai powers only trigger after confronting numerous raiders, and only when the bottommost number of a samurai’s battle track is reached. (Note that passing this number eliminates that samurai for the round.) Katsushiro’s magic Kiai number is 10, for example, and when reached it allows him to turn over the top two cards in the raider deck and put them back face-up in any order. Certainly, knowing what threats are coming up next can really turn the tide of battle. Even better, hitting a Kiai also discards the top raider in that samurai’s combat line to free up some space to keep on fighting. 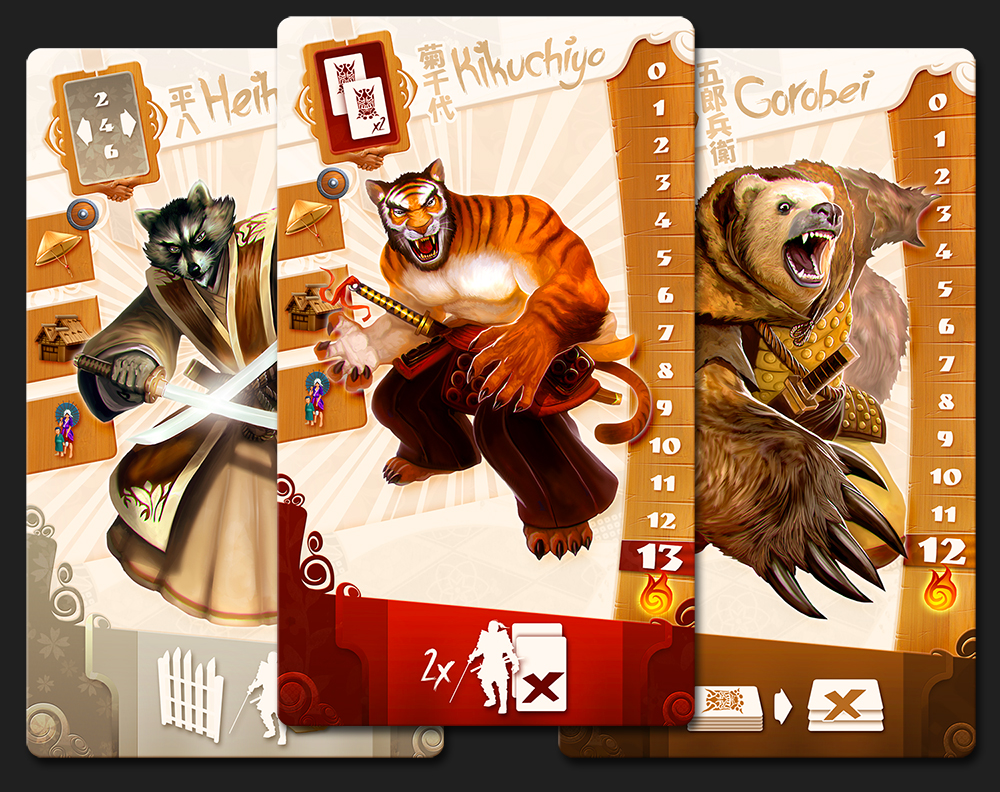 Even with their incredible skill sets, these brave warriors are not indestructible. They can be wounded and even be killed – and if one samurai bites the dust, you all lose. However, getting wounded in this game isn’t as bad as you might think. This next bit may very well be inspired by some batshit crazy alternate universe version of Kurosawa’s masterpiece. When a samurai receives his second wound, instead of dying he’s instantly healed and can flip his board over – unleashing the animal lurking within. That’s right, these samurai are closet lycanthropes just waiting to set free their inner man-beast!

In beast form, the samurai not only have an extended battle track for confronting more raiders, their Kiai get even more powerful than before, too. Remember Katsushiro’s Kiai? Well, Wild Katsushiro can do the same – only with three cards instead of two. The downside of beast mode is that it makes the samurai a bit more vulnerable, since the second wound taken on the animal side means game over.

‘Samurai Spirit’ is extremely versatile (it can be played with anywhere from 1 to 7 players), has gorgeous artwork, and is a lot of fun, but it’s also not easy to beat. This is the kind of game that will kick your ass and kick it often. The game has four different modes of play: Easy, Normal, Hard, and Heroic. While Heroic is the ultimate nightmare and probably should have been called “Hell,” even the Easy mode proves to be quite a challenge. On the plus side, the relatively high level of difficulty makes each victory all the sweeter.

The only issue with the game is a possibility of having zero chance of winning. The number of raider cards in the game is dependent on the number of players, so you may end up with a deck lacking enough raiders of a certain type to defend against. This mainly only affects Families (since failing to match a family causes a family in the village to perish, bringing the players one step closer to losing), but this can easily be addressed by making sure you have enough of them after randomizing the deck.

‘Samurai Spirit’ has a MSRP of $30, but most retailers are selling it for closer to $20. It’s a great bargain for what you get, and an easy recommendation for pretty much anyone.