Here we are in the heart of the summer movie season, when visual effects spectacles reign supreme. Unfortunately, as we’ve seen over the years, some of these films put more effort into their effects than others. We’ve previously celebrated some of cinema’s finest visual effects in an earlier Roundtable. Now it’s time to do the opposite, and castigate the worst. When I sent this topic out to the staff, my original intention was to include special or visual effects of any sort (models and miniatures, rear projection, makeup prosthetics, the works). As it turns out, everyone’s first instinct was to immediately call out movies with crappy CGI. So be it. Here are our picks for movies with the most egregiously awful uses of Computer Generated Imagery.

Every time I think of bad visual effects scenes, the one that always pops into my mind first is the Jabba the Hutt sequence in ‘Star Wars: A New Hope – Special Edition‘. I think we can all agree that George Lucas’ incessant tinkering has generally done more harm than good to his movies, but for me this scene really takes the cake. Cobbled together from a deleted scene in which Han Solo (Harrison Ford) encounters the vile gangster in Mos Eisley Spaceport, a computer-generated Jabba has been inserted in the original actor’s place. Han is then digitally shifted to make it appear that he’s stepping on and over the Hutt’s tail – but it just doesn’t work. Worse, CGI Jabba doesn’t look anything like the Jabba in ‘Return of the Jedi’. It’s no wonder that Han swindles this giant blob of brownish-green goo. How could anyone take a mutant baby turd seriously??? The end result is so amateurish that the film was far better off without the scene.

I made the mistake of trying to watch ‘Spawn‘ a couple weeks back. Turns out hardly anyone thought all that much of the movie fifteen years ago either, but it was still pretty much universally lauded for its breathtaking, groundbreaking visual effects work. Sure, sure, 1997 was very early in the CGI timeline, but this is what passed for astonishing digital effects wizardry back then: 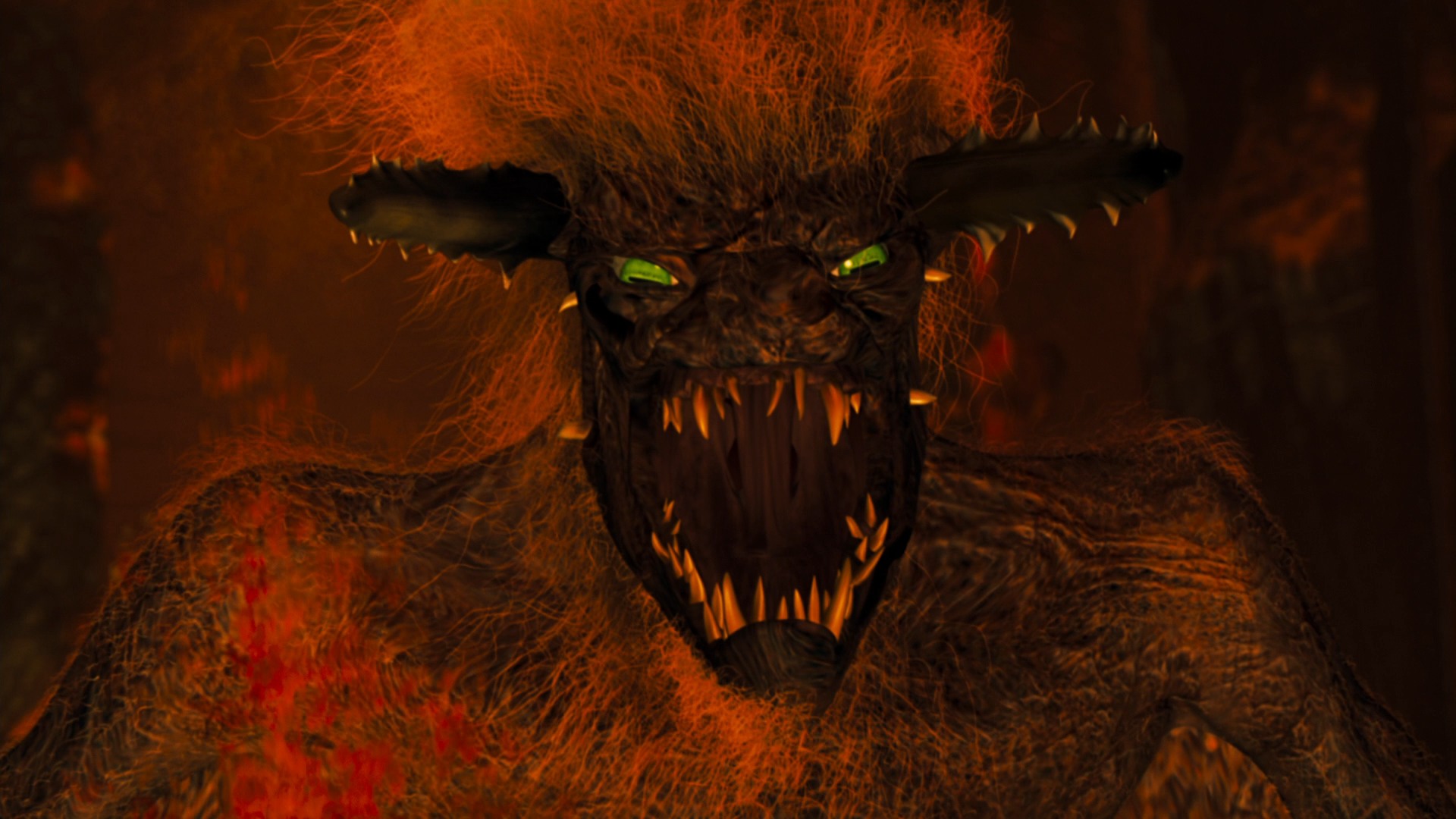 The not-the-devil’s mouth doesn’t even move when he talks! A lot of the other CG effects in ‘Spawn’ are understandably crude but still competent. But Malebolgia here… well, he’s a monstrosity, all right, but not the kind that the movie wants him to be.

‘The Fountain‘ is not a crowd pleaser, but I consider it a masterpiece. After a failed production attempt, Darren Aronofsky had to rethink much of the project in order to greatly reduce its required budget. The minimalism and economy of the sets for the scenes from the past and future timelines reflect an incredible ingenuity and visual brilliance. Of particular beauty are the outer space backgrounds created organically and captured by macro photography. However, one notable scene really stumbles visually for me, and it involves flowers. At a difficult and crucial point in the film, these flowers make me cringe. While the filmmakers prototyped a different implementation of this visual effect, what they wound up with was close to a show-stopper for me. This scene mars what is otherwise a visual powerhouse.

It’s hard to believe that ‘Air Force One‘ came out fifteen years ago! It’s just as hard to believe how few decent movies Harrison Ford has appeared in since. But the hardest thing to believe is the fact that the film was released with such a horrible visual effects sequence at the end. It’s one of the worst ever! The plane crash looked dated the day the film was released, all blocky and crappy, like something from a videogame in the original ‘Tron’. It’s just laughably bad. Literally, laughably bad. I can still remember watching the film in the theater with all my movie geek friends. Everyone broke out laughing as soon as that last scene started playing. Horrendous.

When I think about terrible effects in movies that I generally like, I always fall back to the awful, awful, awful CGI Scorpion King in ‘The Mummy Returns‘. The ‘Mummy’ movies are dumb fun, at least for me, but when The Rock appears as a giant computer-generated scorpion at the end of the movie, it’s hard not to laugh at how dreadful it looks. The worst thing is that it makes no sense why it would look so bad. The rest of the visual effects in the franchise were pretty good, from Imhotep’s rotten regenerating face, to the giant wave of water that bears his likeness as it rushes down a narrow canyon. Those effects were fine and looked good. So, why then, when we get to the finale of the second ‘Mummy’ movie and we see the Scorpion King in all his CGI glory, does he look like he was animated by a first-year computer graphics student who didn’t have enough time to finish the project? I played videogames on the original PlayStation that had more believable human faces than that.

Some may be more forgiving than I am because it released way back in 1996, but for me, Schwarzenegger’s ‘Eraser‘ has one of the best hilariously bad CG effects around. If the idea of shooting and instantly killing a massive crocodile with only one shot through the mouth isn’t gloriously stupid enough, the cartoonish-looking visual effects put this scene over the top. Compared to the rest of the movie’s photography, the coloring on the animal is way off, shadows are noticeably out of place, and the poor innocent creature moves with a horrible blocky stutter. Even back in 1996, when a buddy and I watched the movie in theaters, we laughed at the terrible CGI. The movie has always stuck in the back of my mind ever since.

Mike already took my first pick with ‘Air Force One’. I remember leaving the theater and commenting that the plane crash looked like it had been drawn by crayon. That scene is insanely bad. How something like that gets past Quality Control, I’ll never understand.

The 1998 movie version of ‘Lost in Space‘ is not a good film by any stretch of the imagination. It’s pretty damn dumb. However, it also happens to have some fairly interesting stuff going on visually, from the production design to the costumes to some of the quite-good visual effects. Unfortunately, the movie’s production was very rushed, and it’s painfully obvious that some of the VFX were slapped together at the last moment. Case in point: the irritating CG alien monkey thing named Blarp. Wow, is this awful! Blatantly drawn on top of the live action footage, never in any scene does it convincingly appear to exist in the same reality as anything else on screen. It looks like a rough-draft animatic. I can’t believe that the studio went through with releasing the movie in this clearly unfinished state. It either needed to be pushed back a few months, or all of the scenes with Blarp should have been cut.

Believe us, this list is by no means definitive. Surely, you’ve seen plenty of other movies with lousy CGI. Give us your picks for the worst in the Comments.