Yes, I know, it’s Friday the 13th today, but we’ve done other Roundtables on horror movie topics in the past. Let’s try to think out of the box this week. With the upcoming ‘Alien’ retro action figures in mind, now seems like a good time to stroll down memory lane and remember other toys we’ve collected that were based on movie and TV properties.

Before we begin, we need to draw a distinction between toys that are based on movies and TV shows, versus movies and TV shows based on toys. So, ‘Star Wars’ action figures qualify, whereas G.I. Joe, Transformers or He-Man don’t, because all of those started as toys first and only spun-off into TV and movies to advertise the toys.

Got it? Let’s gets started.

I was a huge fan of ‘Batman Returns‘ as a kid (I still think it’s the best of the Burton/Schumacher Batman series), and that film had tons of toys you could buy based on it. Catwoman had a little rubber whip, I recall. There were a gazillion Batmen, each with different suits for different environments (including a white arctic suit that had a black cowl, kind of defeating the purpose). Most of these came with gadgets or had some press-button action, and were certainly fun to play with, but very few actually took the film itself for inspiration. I’d guess that the toy designers probably weren’t even required to watch the movie. 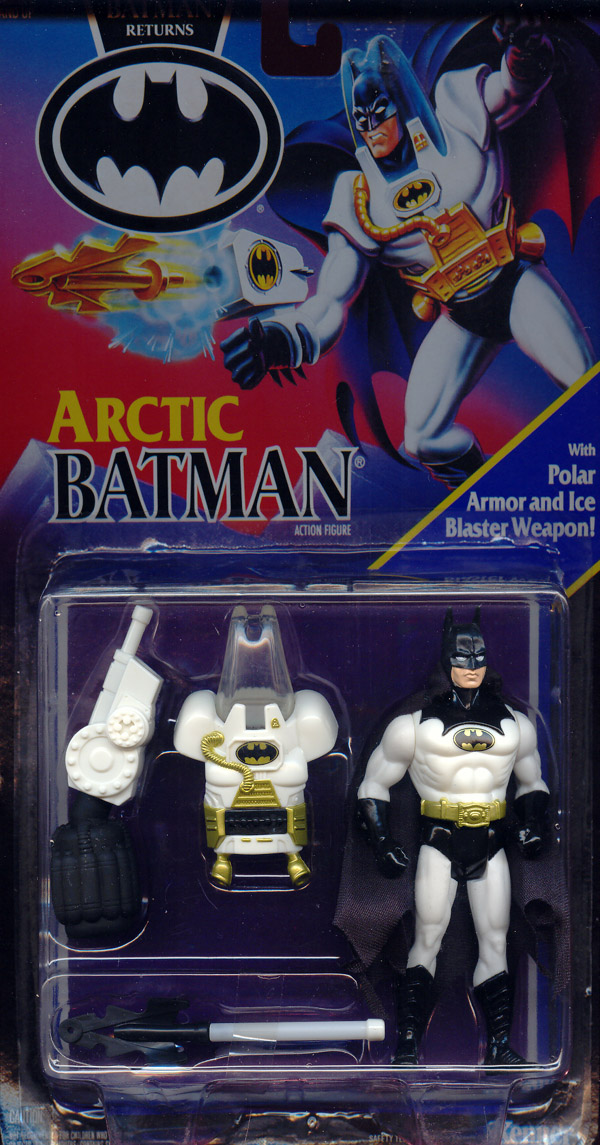 When I was around 6 or 7 years-old, I remember having a lot of ‘Star Trek‘ toys that would make me a rich man if I still owned them today. (Sadly, they got thrown out before ‘Trek’ hit the big screen in 1979.) I had most of the 8″ Mego figures, including Kirk, Spock, Bones, Scotty, Uhura, a Klingon and the guy from ‘Let That Be Your Last Battlefield’. I also had the awesome U.S.S. Enterprise bridge set for those figures, which featured a transporter that you could put a figure into, spin a dial on the top of the set, and make it “disappear.” Other ‘Star Trek’ toys I had at the time included a “Controlled Space Flight” toy of the Enterprise that would fly around in circles on a little wire (and you could control the height it was flying). I also had a very cool “Telescreen Console” game where ships would fly by and you had to try to shoot them to score points.

I was technically a contractor when I started at my very first job, and this tiny, little nternet startup liked me enough to put me on the payroll after that three month term came to an end. This was during the first few months of 2001, and if you invested deeply in dot-coms back then, it’s a safe bet you know how the next part of this story goes. I was officially on the books as an employee for all of a week before they laid off half the company, and I was indeed among the long list on the chopping block. I’d just moved to an unfamiliar town, I didn’t know anybody, I’d just gotten let go from my first job, and I was feeling all kinds of down in the dumps. I went to the movie theater to try to distract myself for a little while, and as luck would have it, ‘Josie and the Pussycats‘ cheered me right up. Its ridiculous sense of humor, the sugary, infectious, pop-punk soundtrack, its candy-colored visuals, and 35mm fuel for my doe-eyed crush on Rachael Leigh Cook were exactly what I needed. Things kept looking up when that dot-com moved some money around, and I was rehired so quickly that I didn’t miss so much as an hour’s worth of pay.

I had a bunch of cash to play with, a barren apartment to decorate, and a deep and abiding love for the ‘Josie and the Pussycats’ movie. That’s when this happened: 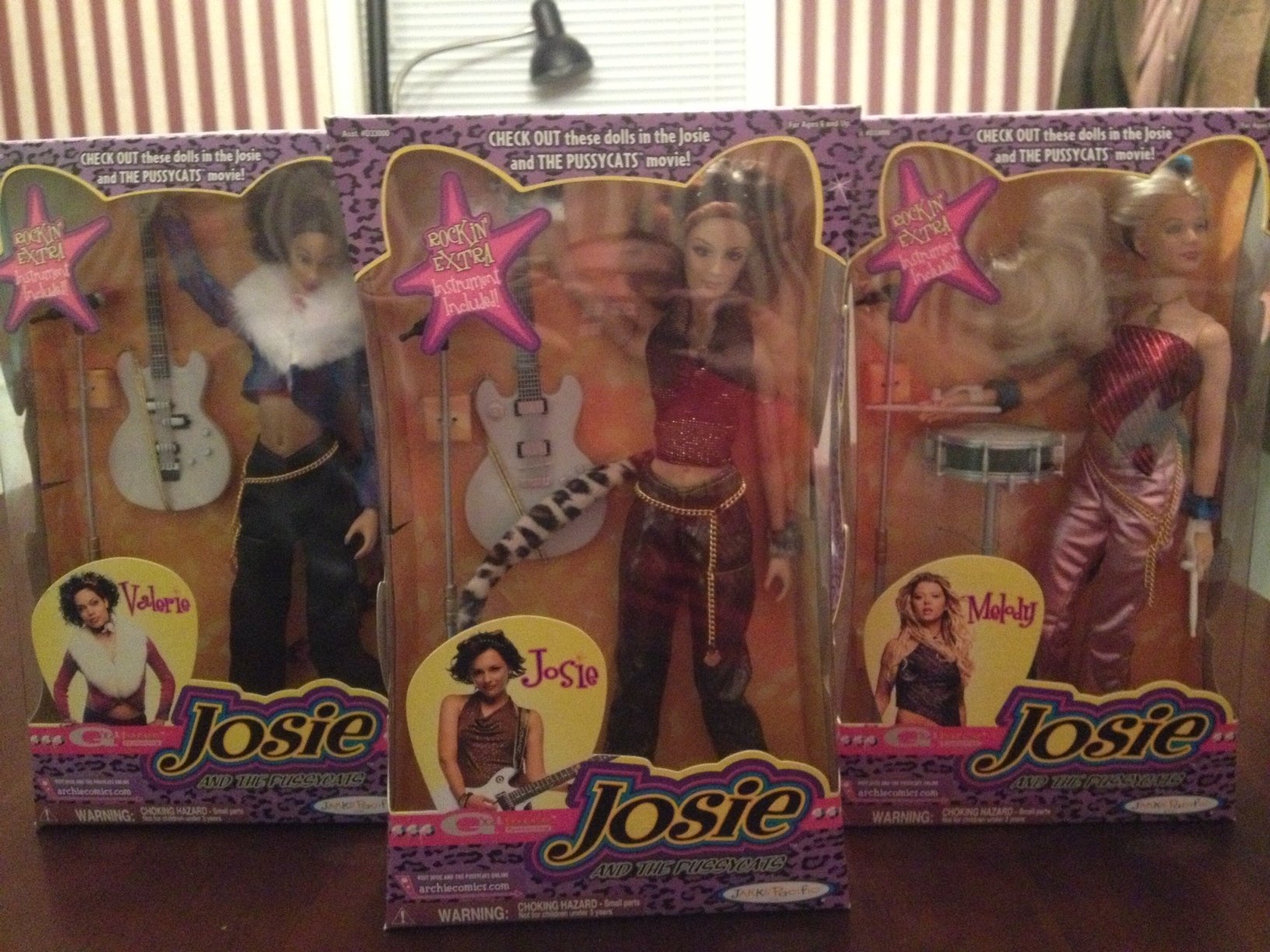 I’m geeky enough to have lots and lots of toys based on TV shows and movies, but these ‘Josie and the Pussycats’ dolls are the only ones with a real story behind them. Oh, and nearly thirteen years later, I’m still working at that same dot-com, only now I have a fancier title and am under the corporate umbrella of the largest media company in the country.

And, yes, I still have those ‘Josie and the Pussycats’ dolls.

Wow, I had to really dig deep into my memory for this one. When I was growing up, most of my toys were second-hand (single tear, right here), which made for some odd acquisitions of less than well-known toys. One such item was this really cool unidentified motorcycle that had missiles that folded down from the side, and seemed like a large-scale version of the ‘M.A.S.K.’ toys.

As I learned later through the knowledge base of the time (word of mouth), the bike was a ‘Rambo‘ toy, which somehow made it even cooler, even if I only ever had one other ‘Rambo’ toy to go with it.

Of course, doing the research now (not as easy as I would have hoped), it turns out that the bike was a S.A.V.A.G.E. Strike Cycle from the hitherto unknown by me ‘Rambo: Force of Freedom’ cartoon. Just crazy.

More recently (ten years ago), I and some friends picked up some random ‘Akira‘ model/toys , which were packaged like trading card, with hidden rares and commons. Only I was fortunate enough to land a Kaneda bike, which despite being small and featuring generic decals, is an excellent bit of desk clutter. 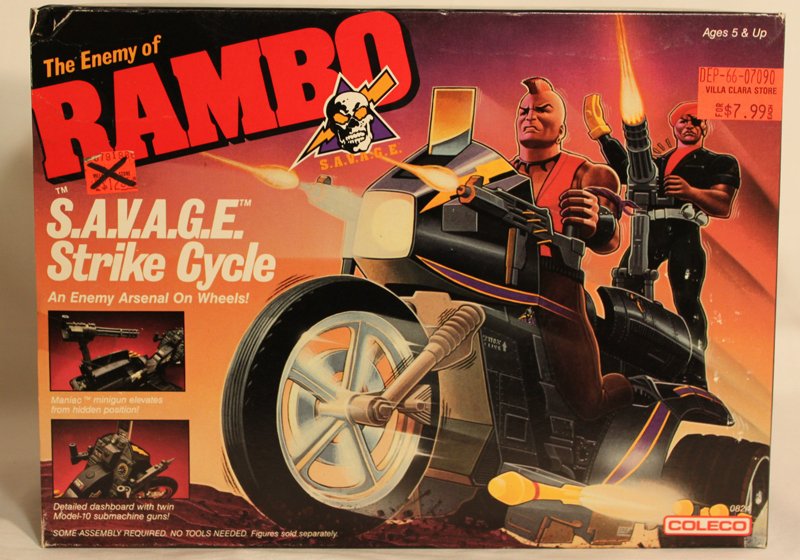 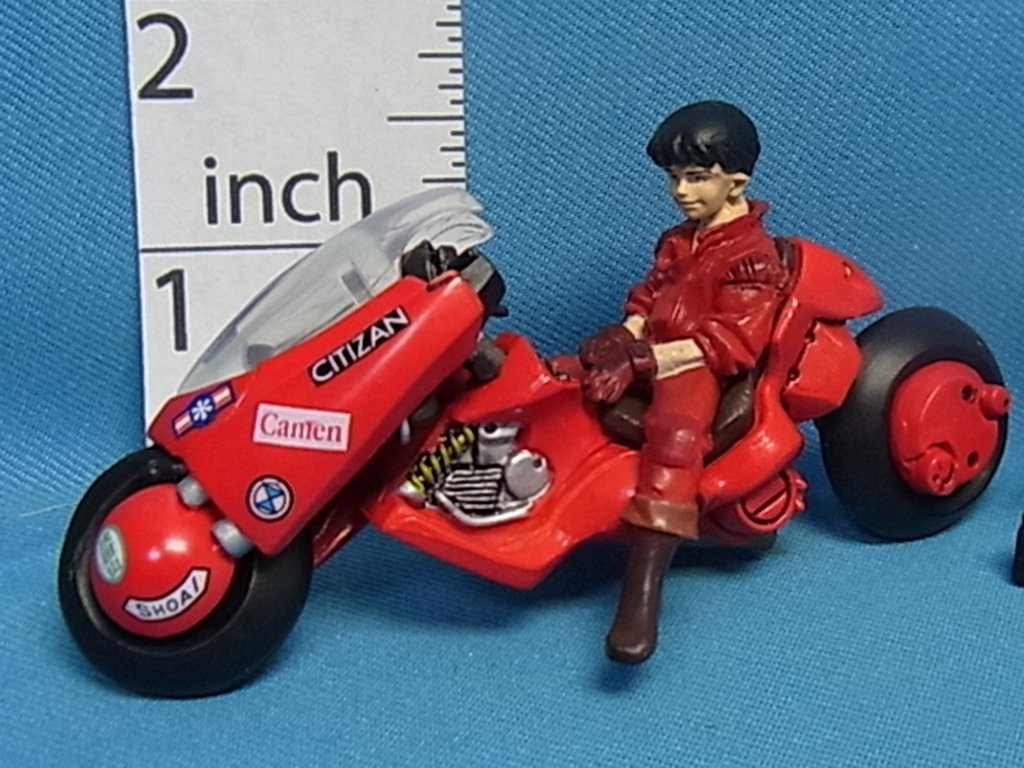 Before I was even old enough to see the movie, I collected all things related to ‘Terminator 2‘ – action figures, posters, trading cards and so on. Each figure came with some cool ability or fun extra piece. For example, the T-1000 could break apart (intentionally) into several pieces, revealing the frozen liquid metal core. The Arnold T-800 came with several options, my favorite being one that had replaceable arms and heads so that you could mix and match the pieces depending on how badly your character had become torn up throughout the course of play. The John Conner figure was pretty lame (just like the character from the movie), but at least he came with a sweet dirt bike. I remember that dirt bike doubling for Gambit’s preferred mode of transportation when I moved into my ‘X-Men’ phase.

But what I remember being the coolest ‘Terminator’ toy was the Bio-Flesh Regenerator kit that Santa brought me for Christmas. The kit itself was cheap crap, unimpressive hard plastic, but what it could do was awesome – at least it seemed awesome to my 11-year-old mind. The kit came with two figure-size T-800 endoskeletons. One at a time, they could be placed between two clear pieces of Arnold-shaped plastic that appeared like Han Solo in Carbonite. This piece became an endoskeleton-filled mold that would barely lock onto the kit at the base. In an adjoining cylindrical part of the kit, you added a gel-like flesh-tone mixture. Push the plunger into the liquid-filled cylinder and the gel would squeeze up through the clear mold.

You didn’t stop pushing the plunger until the gel oozed out the top of the head space. After letting it sit for 10 minutes, the gel became hard enough that the result was a slimy naked Arnold that you could blast to reveal the endoskeleton. This kit itself was so cheap that the gel leaked out from many places in the mold’s seam. The makers obviously knew about the flaw and didn’t care, because one of the accessories was dull plastic kid-friendly Exacto knife provided specifically for trimming off the excess gel. If my kids had this toy now, I’d toss it before they could burn through the gel ingredients, but as a kid, it seemed totally awesome. 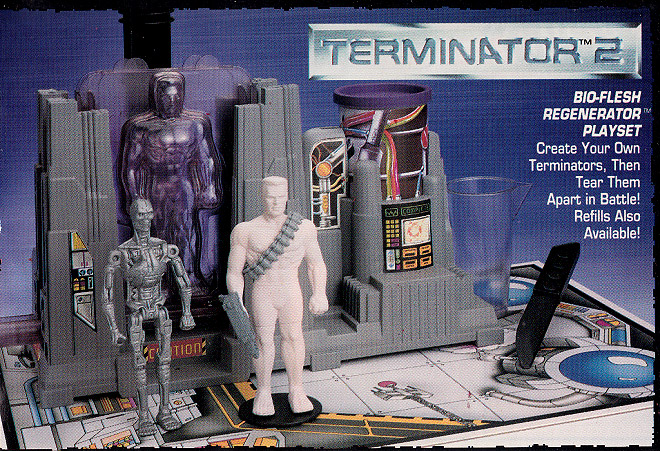 Like pretty much all children (boys, anyway) who have grown up since 1977, I had a selection of ‘Star Wars’ action figures as a kid. Not too many, though. Honestly, I was always disappointed in their lack of articulation compared to the much-superior G.I. Joe toys in the same scale that could bend their elbows and knees, whereas my Luke Skywalker and Lando Calrissian figures were locked into stiff poses. I had a hard time getting over that.

Most readers of this blog know that I have an extensive collection of ‘Dune’ memorabilia. Among that is a full set of 6″ action figures made by LJN, including a very rare prototype of a Gurney Halleck (Patrick Stewart) figure that was never released. 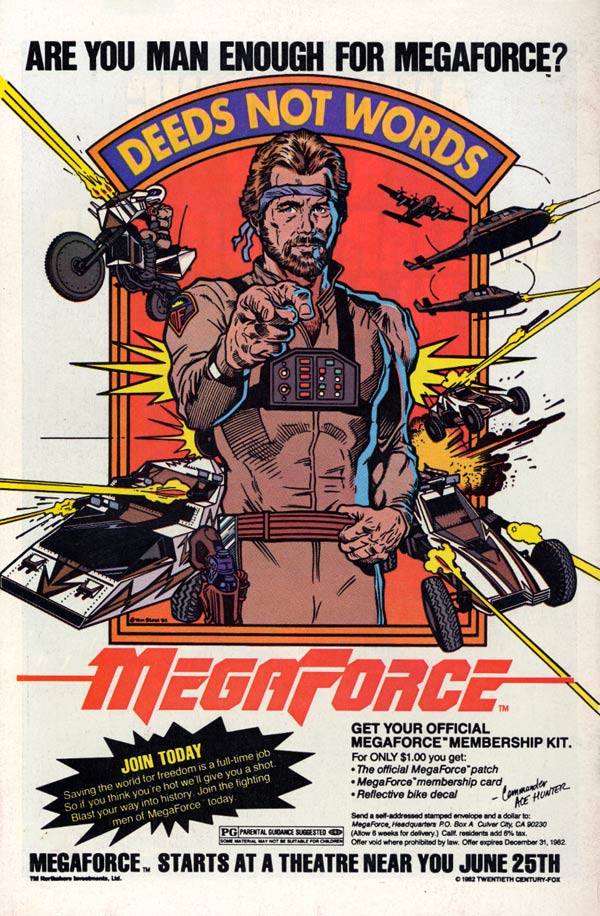 However, when I think back to my childhood, the strangest movie toys stick in my mind. The ultra-cheesy 1982 action flick ‘MegaForce‘ starring Barry Bostwick spawned a small assortment of Matchbox cars based on the quasi-sci-fi military vehicles in the movie. I had a complete set of them that I played with constantly, despite the fact that I hadn’t even seen the movie at that time. I just thought they were cool-looking futuristic army vehicles that could shoot up all my normal Matchbox cars.

Of course, the toys made me want to see the movie, but I didn’t get around to that until I finally caught it on TV many, many years later and… wow… it’s…. well, there are no words for it, really. The poster pretty much tells you everything you need to know. Click that image to enlarge and soak that sucker up.

My mother has been storing in her shed a big box filled with my old Matchbox cars that she keeps threatening to ship to me one day. If she ever does, I betcha those ‘MegaForce’ toys are still in there. In the meantime, here are some random images I found via Google.

What movie and TV toys have you owned over the years? Tell us all about them in the Comments.