In theory, Black Friday, Cyber Monday and the countless other retail sales you’ve been bombarded with recently are supposed to be the time to buy holiday gifts for friends and family. Be honest, though. You actually bought stuff for yourself, didn’t you? This week’s Roundtable is a bit of a confessional. What presents have you already given yourself this year?

I’ve always suspected that all Black Friday/Cyber Monday purchases are for the buyer. I know everything I’ve ever bought on those days was for me! This year I picked up an Amazon Echo Dot to hook up to my stereo. I have these things all over our home now – one in the office, one in the kitchen, one upstairs, and a Tap for trips away. I’m looking forward to playing music through a good sound system now as well. I just wish I had a better way to control music from my iTunes library.

I’ve never been out on Thanksgiving night to battle the crowds for doorbusters, but I certainly like to head out to my local Target, Walmart and Best Buy stores on Friday mornings at 7 AM to pick up after the others. By that time, the crowds are gone and the shelves are restocked, allowing me to grab stocking-stuffers galore without the chaos.

I must confess that each year, between picking out dirt cheap pajamas and silly knickknacks, I’ll rummage through the marked-down Blu-ray shelves for unclaimed gems. This year, I found a couple discs that I’ve wanted to add to my collection.

Last year, I found the first season of ‘True Detective’ for $10 at Best Buy. Having not seen Season Two, I was happy to find it at Best Buy with a $10 price tag, so I snagged that one for myself. (I know that the majority of fans were disappointed with it, but I have to see it through for myself.) I also picked up ‘Burnt’ ($5 at Target), ‘It Follows’ ($4 at Best Buy) and the contemporary adult Christmas classic ‘The Night Before’ ($6 at Walmart).

When those Blu-rays show up under the tree, I’ll play dumb when I’m asked where they came from.

As I do every year, I avoid the Black Friday crowds. There’s never really anything I want for sale on that day, which I noticed most stores have extended for the whole weekend. This last Friday morning, however, I found myself giving a friend a ride to work at 8 AM, and she works at Target. To my surprise, the crowds from outside were smaller and less crazy than expected, and my friend explained that the store was doing a 24-hour sale in anticipation to appease Black Friday insanity.

Anyhow, I decided to go inside and at least wander around a bit just for kicks. Of course, I instinctively gravitated towards the electronics section, where I found the last PS4 ‘Uncharted’ bundle. I’ve been putting off upgrading to the new console system since it first came out, but when I saw the price marked down to $230, I felt the sudden urge to purchase it. At the same time, the store allowed the use of 15% coupons during the sale, so I jumped at the opportunity to buy the machine for $150 off retail. This is my Christmas gift to myself with the added bonus of playing the new ‘Uncharted’ game, which I’ve wanted for a while as well.

When Nintendo announced ahead of time that it would offer a new New 3DS on Black Friday, one in white and one in black with a subtle Mushroom Kingdom relief on the face plates and a price of $99.99, my personal Black Friday target became clear. I’ve had 3DS systems in the past, and I have a ‘Majora’s Mask’ New 3DS XL in the box , but I’ve really wanted a New 3DS that was similar to my 10-year-old black Nintendo DS Lite.

On Thanksgiving evening, I went to Target, but I struck out big. I then went to Walmart, and I kid you not, I was able to get the last one of these (for that evening at least), which thankfully was black. 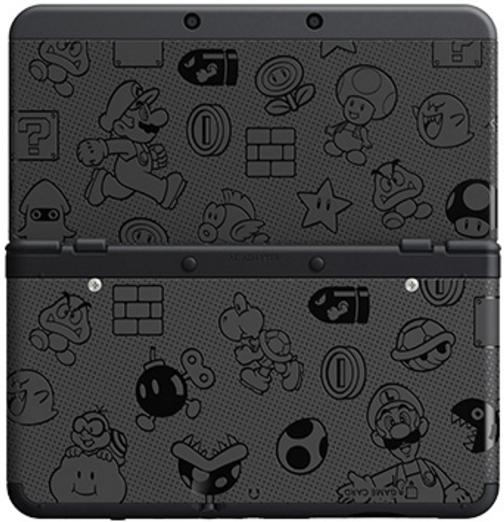 Last week, our Sony Blu-ray player decided it liked the disc inside it too much to give it back. Eventually, I got the disc out (hint: hold the eject button while unplugging and plugging back in the player), but the player itself was toast. It wouldn’t respond to anything on the remote nor on the unit itself. So, on Black Friday I ordered a replacement player for $49.99 (also a Sony, so I wouldn’t have to reprogram my Harmony remote). I ordered this thing on Friday evening, and on Saturday morning there was a ring at the doorbell. The new player had arrived about 16 hours after I ordered it with free one-day shipping (damn, I love Amazon), and it went into the system without a hiccup.

I also asked my digital personal assistant Jarvis… I mean “Alexa”… to order me some mixed nuts on Black Friday. They arrived with the Blu-ray player. They’re maybe the best mixed nuts I’ve ever had. We are indeed living in the future.

I feel as if I haven’t really gotten myself that much from the holiday sales, but then I look at my stacks of unwatched movies and shipping notifications only to realize how terribly wrong I am.

From Barnes and Noble’s Criterion sale, I picked up ‘Only Angels Have Wings’, ‘The Big Chill’, ‘In a Lonely Place’, the ‘Lady Snowblood’ collection, and ‘Day for Night’. Between Amazon and walmart.com, I ordered season sets of ‘Hannibal’, ‘iZombie’, ‘Arrow’, ‘The Flash’, ‘Supergirl’, and ‘Legends of Tomorrow’. Further proving that my tastes are all over the place, I bought a ‘Lilo and Stitch’ double feature, ‘The Conjuring 2’, ‘Popstar: Never Stop Never Stopping’, all three ‘Purge’ movies, the mutant killer snowman flick ‘Jack Frost’, Filipino zombie/kung-fu epic ‘Raw Force’, The ‘Running Man’-esque ‘Deathrow Gameshow’, ‘Batman: Bad Blood’, ‘Lights Out’, and the Bogey/Bacall double shot of ‘Dark Passage’ and ‘To Have and Have Not’.

The only videogame I snagged this time around was ‘Mortal Kombat XL’ for the PS4. Finally, I can pit Leatherface from ‘The Texas Chainsaw Massacre’ against one of the acid-spitting xenomorphs from ‘Alien’. I’d have gotten more, but my birthday falls just before Black Friday, so I wound up with nearly everything I wanted anyway, and I’m sure I’ll get the rest for Christmas.

I honestly did not intend to spend much money on myself this year, but somehow I kept finding deals I couldn’t resist. Like Mike, I bought an Amazon Echo Dot. I bundled mine with a Harmony Hub so that I can control (to a limited extent, it turns out) all my home theater equipment through Alexa voice control. I’m still playing around to work out the kinks with that, but it’s pretty neat.

I had amazing self control during the Barnes & Noble Criterion Collection sale and only walked out of the store with two Blu-rays: ‘Short Cuts’ and ‘Akira Kurosawa’s Dreams’. However, I got sucked in by the back-to-back sales on titles from Twilight Time (‘The Russia House’, ‘Zelig’, ‘Cutter’s Way’, ‘The Mechanic’, ‘The Other’) and the Warner Archive (‘The Big Sleep’, ‘Suspicion’, ‘Out of the Past’, ‘The Hunger’).

I think I’m done buying stuff for myself now. At least, I hope so.

Even though the focus of this blog is on movies and home theater gear, today’s Roundtable is not necessarily limited to those items. Feel free to tell us about any swag you bought for yourself recently when you should have been shopping for others.