May 26th marks what would’ve been the hundredth birthday of Peter Cushing, and the prolific British actor left behind a sprawling filmography for his many admirers to rediscover. A number of Cushing’s most iconic horror films have found their way onto Blu-ray overseas, among them ‘Dracula’ and ‘The Curse of Frankenstein’. As I write this, ‘The Vampire Lovers’, ‘The Brides of Dracula’, and the Dalek double feature of ‘Invasion Earth 2150’ and ‘Dr. Who and the Daleks’ are weeks away from debuting on Blu-ray on one side of the pond or the other. Be it his coldly malevolent turn as Grand Moff Tarkin in ‘Star Wars’ or his countless Gothic horror films, there’s no shortage of ways to honor the life and work of Peter Cushing on the year of his centennial. Rather than stop at merely watching some of the actor’s most beloved movies, author David Miller instead celebrates with the release of his book ‘Peter Cushing: A Life in Film’. 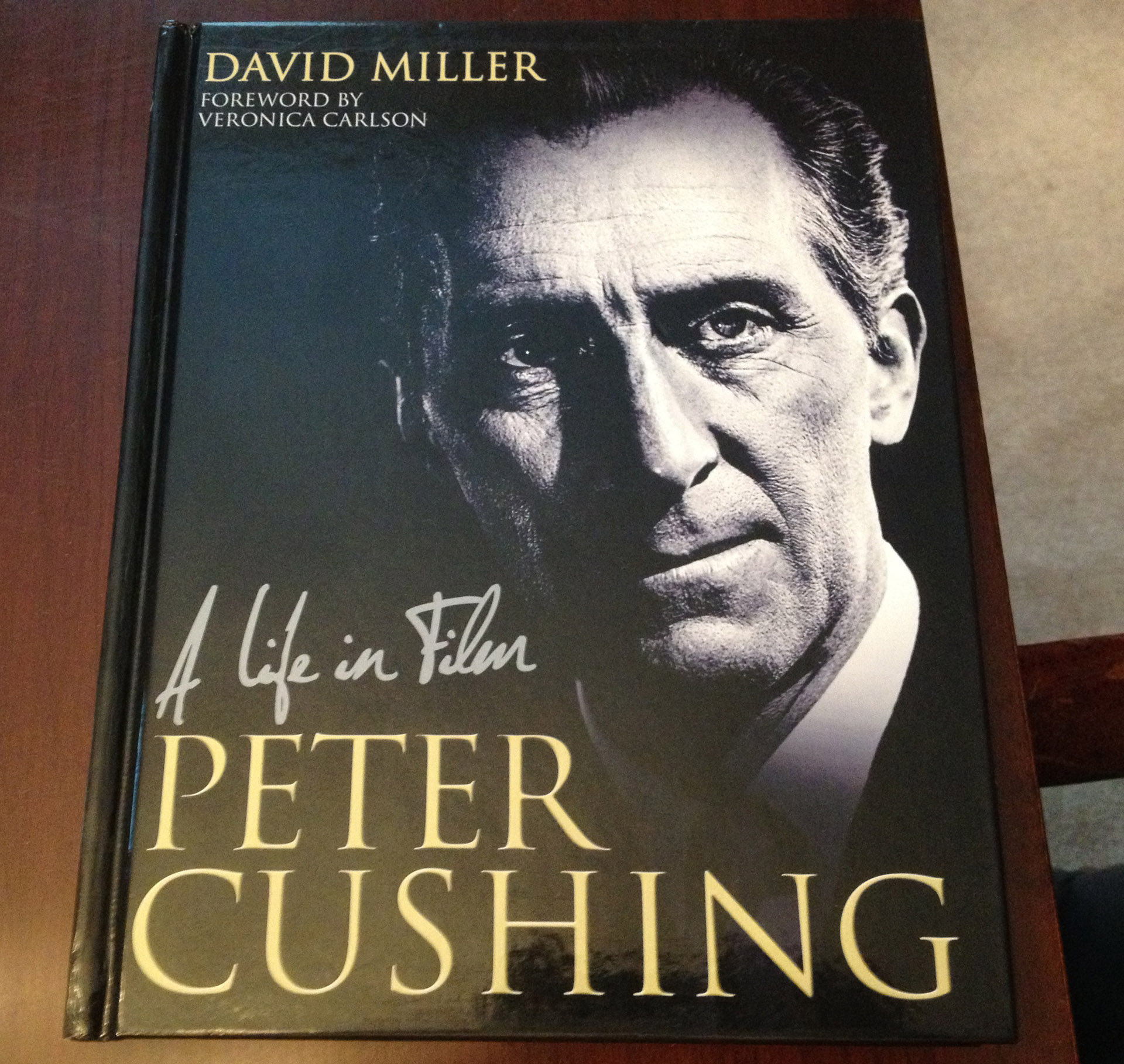 As its title suggests, ‘Peter Cushing: A Life in Film’ is a biography told through the actor’s many decades of work on stage, screen, television and radio. Most every aspect of Cushing’s life explored throughout the book is in some way woven into performance, to the point that he’s already acting by the second page of chapter one. It’s a short while before film becomes an integral part of Cushing’s story, though. The book opens by delving into the actor’s early work in various repertory theaters. Though Cushing enjoyed a very brief stint in Hollywood, from there it’s off to Broadway, Canada and a return home to England. Cushing would once again establish himself as a stage actor before radio and television propelled him to stardom. As someone who was introduced to Cushing’s work through the likes of ‘Horror Express‘ and ‘The Abominable Snowman’, never having seen him any younger than middle-aged, I found his work in earlier years to be intriguingly unfamiliar territory.

Following such staggering successes as the groundbreaking BBC television production of ‘1984’, this biography soon finds its way to the likes of ‘The Brides of Dracula’, ‘The Mummy’, ‘The Revenge of Frankenstein’ and ‘The Hound of the Baskervilles’, and Cushing’s best known films are discussed in far greater depth. Alongside his iconic work for Hammer, an array of lawyers, pirates, professors and quirky inventors that shouldn’t be at all confused for a Timelord are approached with equal enthusiasm. Generally, anything that involved Cushing and an audience is addressed, be it an appearance on the Desert Island Discs radio program or his many performances in many mediums as Sherlock Holmes. It’s also interesting to learn about the projects that went unrealized and the roles that Cushing had to turn down for one reason or another.

David Miller strikes just the right balance as he delves into Cushing’s expansive body of work. Rather than reading like a laundry list of titles and plot synopses, ‘A Life in Film’ is a proper narrative. The broad strokes of Cushing’s life are cinematic in their own right, including a sweeping romance that spanned much of his life, his perseverance as he barely scraped by as a working actor, the enormous success he enjoyed that came neither quickly nor easily, and the eventual tragedy he would have to endure for the remainder of his years. Many of these roles are explored in terms of how they impacted the trajectory of Cushing’s career, and at times the lessons learned that would inform his later work.

The attention paid to performance sets this book apart from some of the other film biographies I’ve read. The plot summaries are written with enough detail to make me feel as if I’d seen some of these productions firsthand, and they’re brief enough to avoid overstaying their welcome. There are constant splashes of behind-the-scenes color about what went on backstage or on the other side of the camera, to the point that Miller can cite Cushing’s often modest salary for almost every role he took. With so many of Cushing’s co-stars, directors and producers appearing time and again throughout ‘A Life in Film’, a certain intimacy is formed between the reader and the British stage and film communities. Seemingly everyone quoted throughout the book adores Cushing, and that sentiment is infectious.

‘A Life in Film’ does a marvelous job of drawing in the reader, even when the subject of film remains fairly far off on the horizon. For one, Miller doesn’t treat Cushing as some sort of detached subject. Drawing deeply from interviews and personal correspondence, the actor is very much a vital participant throughout ‘A Life in Film’. Cushing’s sparkling wit, sly sense of humor and kind nature beam brightly, which makes it that much more devastating to see that twinkle in his eyes suddenly snuffed out after the passing of his beloved wife. Although I went into ‘A Life in Film’ already an established fan of the actor, there’s so much heart to these many quotes from Cushing that my admiration was heightened that much more. ‘A Life in Film’ would have been a compelling read regardless, as it charts Cushing’s unwavering devotion to acting and his ascent in the face of so much adversity, but that emotional underpinning elevates the book into something truly special.

This isn’t a story teeming with fast cars, fast women, fistfuls of cash and cinematic glamour. Peter Cushing was an immensely talented actor who devoted his life to quiet passions, his beloved wife, his many friends and his love of performance. With a rarely paralleled acting career spanning six decades, Cushing’s truly was a life in film, and that sentiment is reflected in a biography that’s nearly as charming and compelling as the man himself. Most every page of this handsome hardcover features a production still or candid photo of Cushing, with more than two hundred stills in all. It also has sixteen full-color pages of photographs and poster art. The heartfelt foreword by Veronica Carlson, Cushing’s co-star in ‘Frankenstein Must Be Destroyed’ and ‘The Ghoul’, very much deserves a mention as well. My only complaint would be the slightly higher than average number of typos scattered throughout the book, but that’s a minor concern at best. ‘A Life in Film’ inspired me to seek out a number of Peter Cushing’s movies that I’d either glossed over or barely knew existed, and what greater compliment can I give than that?