Written and directed by Mamoru Oshii (later renowned for Ghost in the Shell), the 1984 feature Urusei Yatsura 2: Beautiful Dreamer is a raucous, surreal teenage high school comedy with some metaphysical ideas on its mind. The film was a clear influence on both Groundhog Day and Dark City, and you don’t need to worry if you haven’t seen its predecessor or the TV show it spawned from. 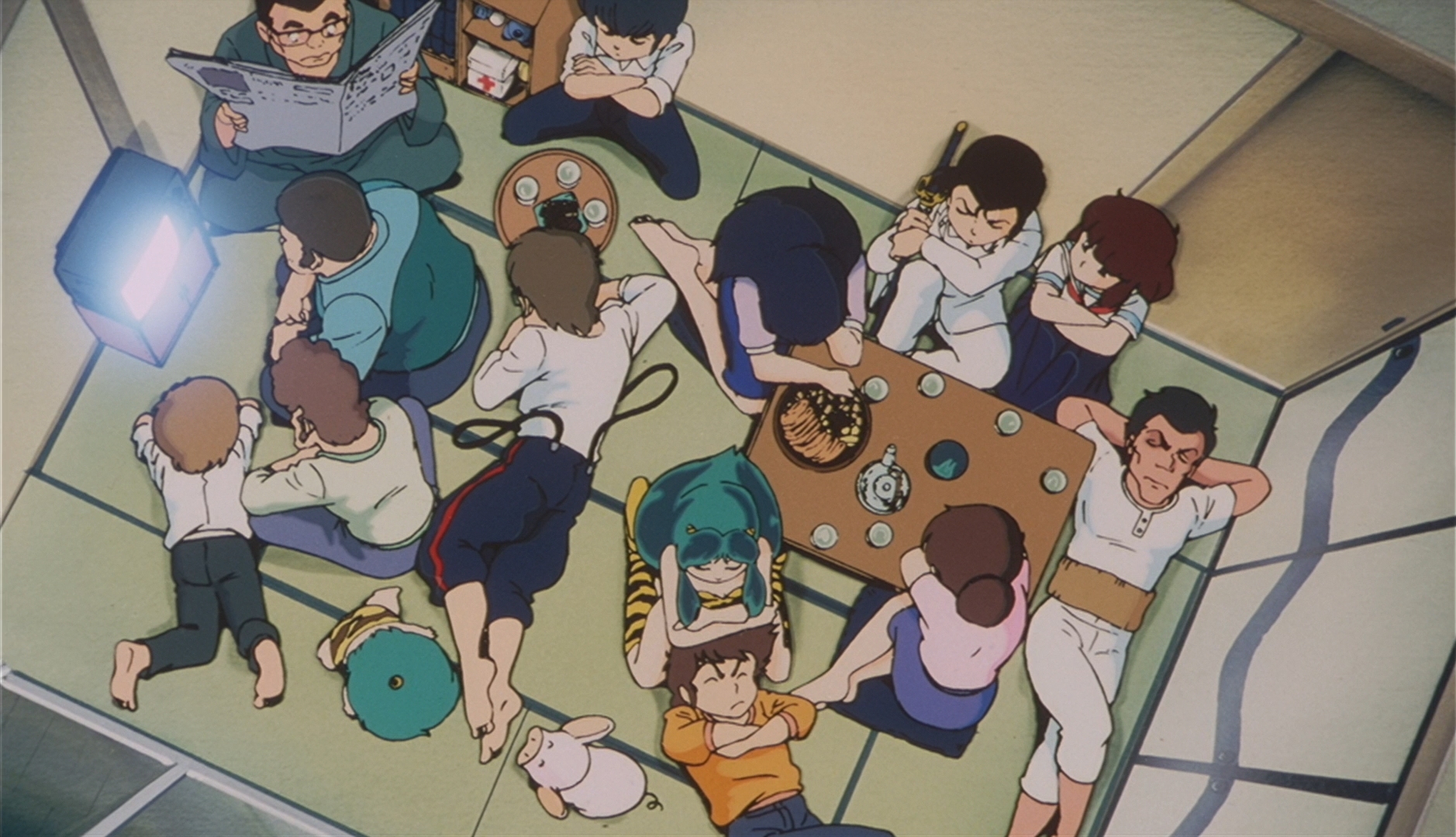 Urusei Yatsura was one of the key titles in the “magical girlfriend” genre. The franchise has a long history that may seem daunting to a novice. It started as a manga by Rumiko Takahashi that was published from 1978 to 1987. During that run, the property was adapted into an anime series that aired over 200 episodes from 1981 to 1986. The first half of those episodes were directed by Mamoru Oshii, who also helmed the first two theatrical movies – Urusei Yatsura: Only You in 1983 and Beautiful Dreamer in 1984. Six features were produced in all, the last in 1991, as were a handful of OVAs, video games, and other tie-ins.

Despite all that wealth of backstory, Beautiful Dreamer stands apart from the rest of the series to such an extent that it can be enjoyed on its own with only a minimal primer, which I’ll summarize right now.

The title Urusei Yatsura loosely translates as “Those Obnoxious Aliens.” The story follows a dim-witted, perpetually horny teenage boy named Ataru Moroboshi. Through an absurd set of circumstances, Ataru finds himself unwittingly engaged to an adorable but annoying alien princess named Lum, whose magical powers include flight and the ability to zap Ataru with lightning bolts, which the jealous Lum does frequently, any time she senses him take interest in another female. Ataru considers this a major inconvenience, as he has virtually no interests except other females. Most of the series’ storylines revolve around variations of Ataru flirting with other girls and trying to find clever ways out of his engagement, only to be repeatedly cock-blocked by Lum or her alien family at every turn. Much of the humor in the series draws heavily upon Japanese culture, mythology, or puns that may be lost on Western viewers, but the basic slapstick pratfalls and wildly surreal goofiness were translatable enough to make the franchise a big worldwide hit.

The first feature film, Only You, sticks pretty closely to the established formula and was criticized as just more of the same. Oshii himself was disappointed with it and considered the movie a failure. Allowed the opportunity to try again, he had more ambitious plans for Beautiful Dreamer, which often feels like an unrelated script that was retooled to take place in the Urusei Yatsura universe. Although it features all of the series’ main characters, their personalities are quickly defined well enough that no prior history with them is required. Further, Lum’s presence and powers are largely downplayed in favor of focusing on the human cast. 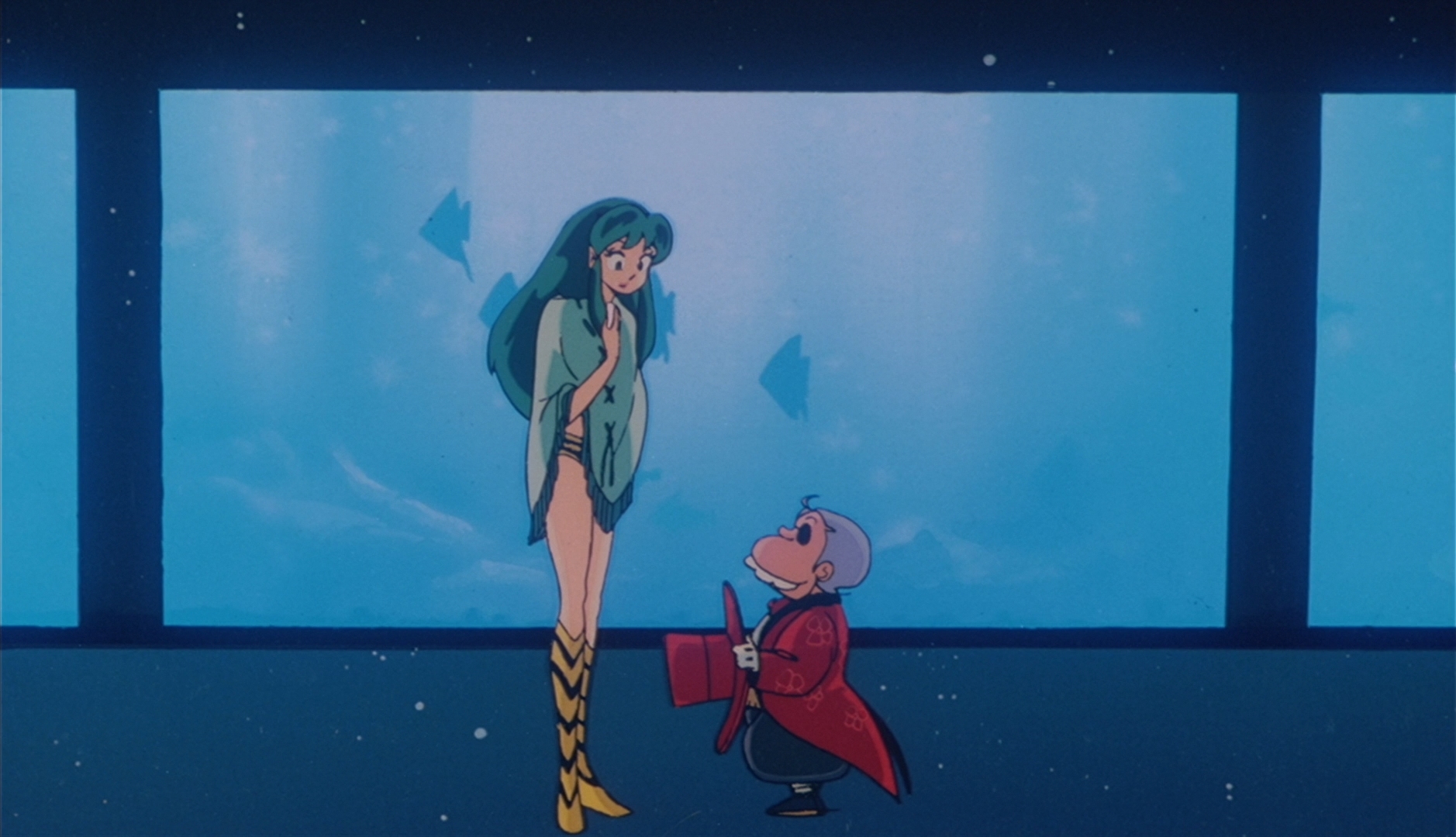 The plot takes place on the eve of the Tomobiki High School’s annual festival, for which all of the students have been working feverishly to design and construct elaborate costumes and decorations related to various themed displays. This event is so important that everyone, staff and students alike, have spent their days and nights at the school, toiling without rest to get everything ready. How long they’ve done this isn’t clear, days at a minimum but perhaps even weeks. In fact, they may have been at it even longer than any of them realizes. After treating several cases of extreme exhaustion, stern school nurse Sakura is the first to recognize that something very strange is going on. The entire town appears to be stuck in an endless loop, reliving the same day over and over again, unknowingly repeating the same actions and same conversations.

Once word of this spreads to Ataru and his friends, the situation in town begins to deteriorate. Attempts to leave are foiled by altered roads and train lines. The city itself shifts and contorts, and everything suddenly leads back to the school. Little by little, people disappear when no one’s paying attention until only a handful of main characters remain. Before long, the setting turns post-apocalyptic, yet a strange intelligence seems to be monitoring everyone and controlling their destinies, inexplicably keeping the local market stocked with ample food and supplies. Only Lum doesn’t seem bothered by any of this. As a matter of fact, she’s having fun. If any of the predicament is her fault, she’s oblivious to it. Whether any of it is even real or just a dream is a mystery to be unraveled. 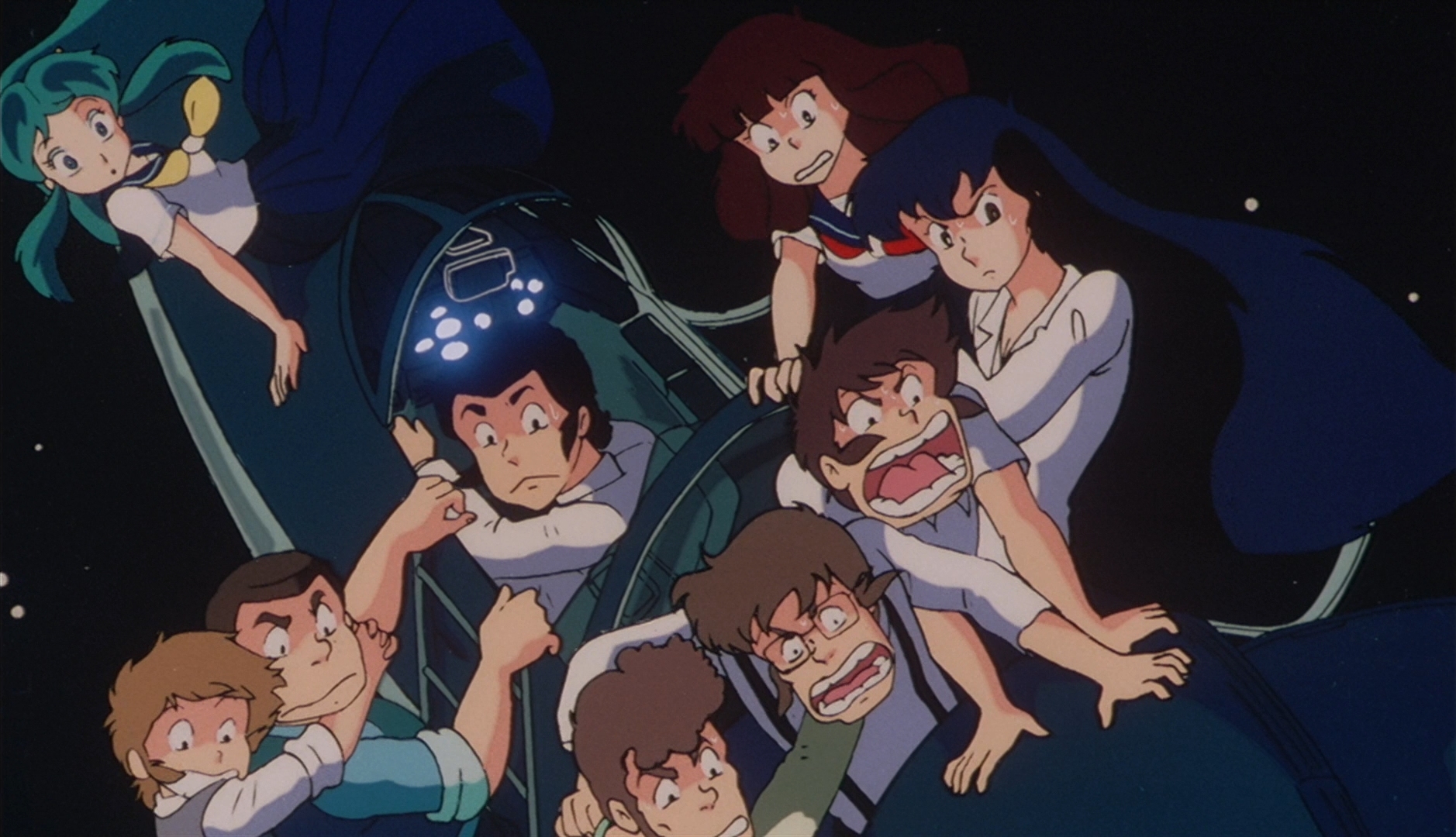 For a comedy about a boneheaded teenage boy with a wacky magical girlfriend, Beautiful Dreamer offers up some unexpectedly weighty and philosophical themes to chew on. At the same time, it’s still very much a screwball farce filled with goofy characters, jokes, and slapstick clowning around. Oshii clutters so much visual information, rambunctious action, and rat-a-tat-tat dialogue into every scene that it’s almost impossible to keep up with it all on a first viewing, especially if trying to read subtitles at the same time.

Some of this humor holds up, some doesn’t, and some simply may not translate. One potentially serious problem is that the strong sexism baked into the series’ premise has not aged well. Ataru’s lustful antics make him come across as a creep, which is played for laughs but doesn’t seem so funny anymore. The teenage female characters, especially Lum, are highly sexualized, though that has been toned down a bit in this entry compared to others. Lum’s signature outfit of a yellow tiger-striped bikini adorns most of the movie’s poster art (and the cover of the Blu-ray), but is only seen a couple times briefly in the film itself. Still, stuff like this can be uncomfortable for an adult to watch today.

Also perplexing is that the theme Ataru’s friends are building for their festival display is a World War II café decked out in Nazi regalia and a rotating neon swastika sign, and no one ever comments on that. I realize that Japan was an Axis power in that war, but you’d think that by 1984 it was firmly established that Nazis were evil and not something anyone should associate themselves with (a lesson that may have been forgotten by 2018, but that’s a separate conversation).

Urusei Yatsura 2: Beautiful Dreamer has some issues and may not be a masterpiece, but it remains a very interesting and influential early work from a filmmaker who would later go on to direct a true landmark in his medium. 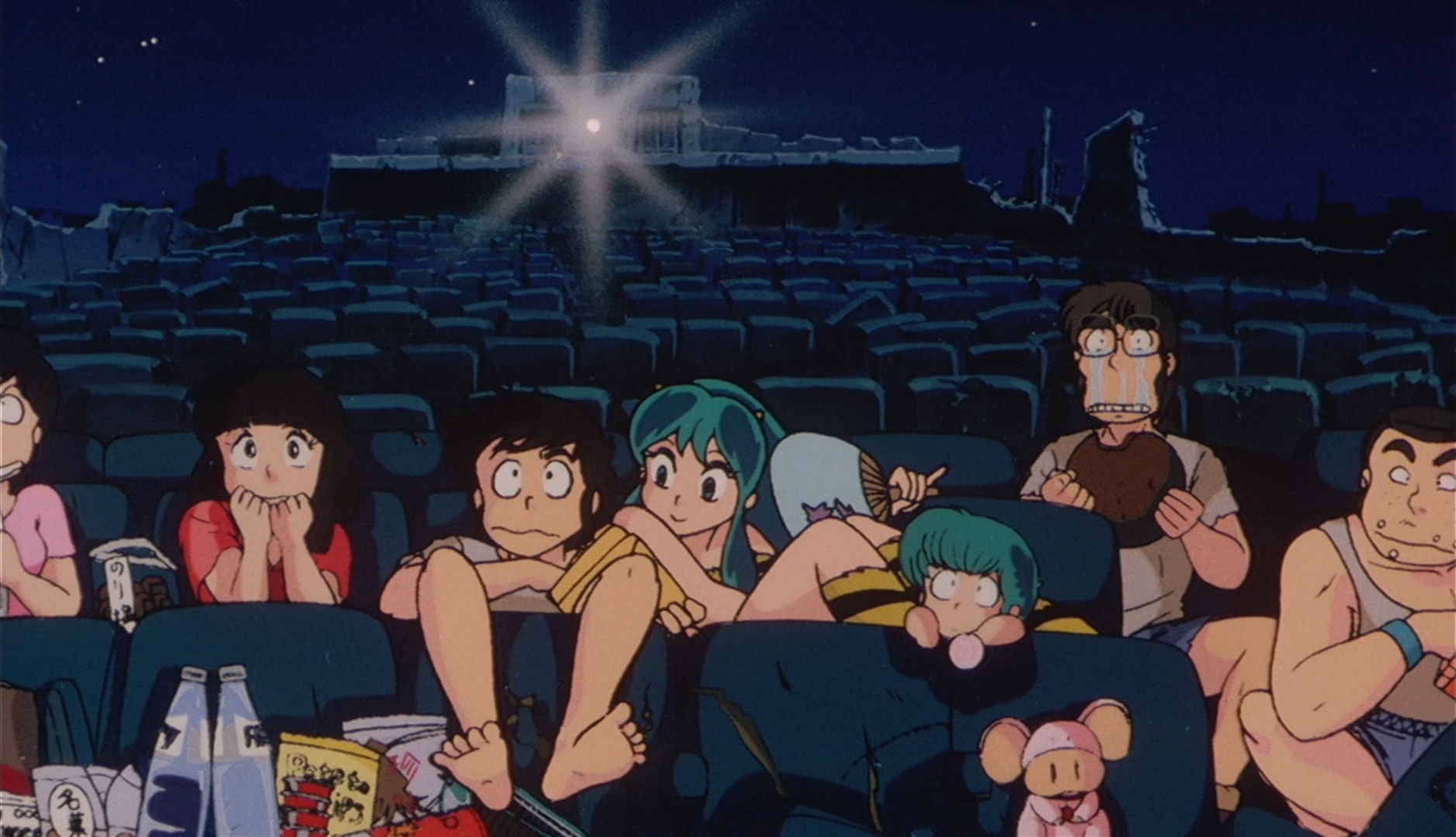 Beautiful Dreamer is the only Urusei Yatsura entry produced by Toho Studios (which explains a brief cameo from Godzilla on a theater screen in one scene). As a result, the rights to this movie have resided separately from the rest of the series, most of which was released on DVD by AnimEigo a number of years ago. Thus far, it’s the only installment to turn up on Blu-ray, via Discotek Media.

The Blu-ray is mildly pillarboxed to a ratio of 1.74:1 for some reason. The transfer may not be a stunner, but it’s generally solid. The image has good colors and some light grain. Detail is OK, but may be limited by the original animation artwork. The contrast looks a little flat and the picture is sometimes overly dark, but it’s very watchable.

Audio is provided in the original Japanese PCM mono (listed in the disc menu as “restored”), a Japanese 5.1 track (DTS-HD Master Audio) that I presume was created for DVD some time back, or an English mono dub. I primarily listened to the Japanese mono, which is very loud, crisp and clear, with great fidelity and range. I sampled the 5.1 track, and that also seemed decent enough, but didn’t quite have the same presence as the mono. I don’t do dubs.

Two subtitle tracks are offered – one with full English subtitles and one that only translates songs and on-screen signs. It’s obvious that the full English subs were originally written by AnimEigo, because they periodically also include notations on screen to explain the context of certain lines or phrases, which is a sometimes annoying hallmark of AnimEigo’s DVD output.

Bonus features are all recycled from DVD: an audio commentary by Mamoru Oshii recorded in 2001, Japanese and English trailers, and vintage English credits. A few text pages of liner notes provide a history of the franchise and recap of the premise, along with some further elaboration explaining cultural references in specific scenes or dialogue. 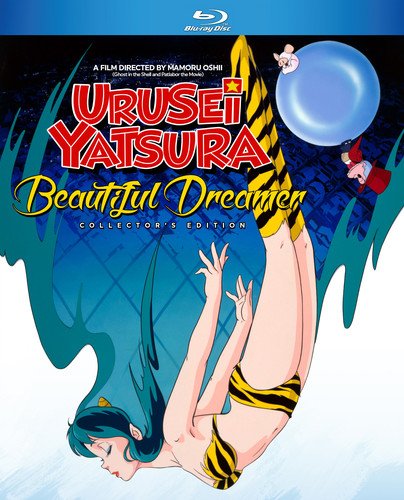