Filmmaker Stuart Gordon may be best known for his H.P. Lovecraft literary adaptation Re-Animator, but connoisseurs of his work will recognize his true masterpiece as an ambitious science fiction drama that was unjustly overlooked during its original release in 1997. After years of existing only in a subpar DVD edition, Space Truckers finally hauls ass onto Blu-ray!

It’s all right there in the title, folks. If you can hear the phrase “Space Truckers” and not immediately want to see the movie, it’s probably not for you. Dennis Hopper stars as John Canyon, a grizzled trucker hauling a load of square pigs down the galactic highway to a space station on the other end of the solar system. After being shafted out of his payment by the powerful InterPork corporation, Canyon takes another job of dubious legality, moving a freight of what he’s told are sex dolls straight to Earth. Though he doesn’t believe that story for a second, he knows better than to ask too many questions.

A series of misadventures leads to Canyon, rookie trucker Mike (Stephen Dorff), and shared love interest Cindy (Debi Mazar) being captured by space pirates commanded by the crazed, half-robotic Capt. Macanudo (Charles Dance, having a ball). In a former life, before he was betrayed by his co-conspirators and left for dead, Macanudo was a brilliant scientist in charge of a top-secret weapons program aimed at overthrowing the government of Earth. That backstory couldn’t coincidentally have anything to do with Canyon’s secret cargo, could it? Nah…

Space Truckers is an unabashed B-movie that revels in its cheesiness. Produced for a low $25 million budget, the film stretches those dollars on an abundance of elaborate models and miniatures that were not very convincing even in 1997, and were probably not really intended to be. With its brightly colored costumes and production design, delightfully cheeseball special effects, a ridiculous plot, and hammy performances, the movie feels like it was designed specifically to court the Mystery Science Theater 3000 crowd.

Unfortunately, director Gordon never found the right sales hook for it. The picture received minimal distribution internationally and, as far as I can tell, was never even released theatrically in the United States. The few critics who saw it didn’t get the joke at all. Nevertheless, if you can view it in the right mindset, it’s great campy fun, the sort of thing that begs for cult appreciation. At a brisk 95-minutes, Gordon also knows better than to waste too much of your time with this nonsense.

Until recently, the only home video edition of Space Truckers was a crappy non-anamorphic letterbox DVD, with terrible cover art that tried to sell it as a straightforward sci-fi action flick. British label Second Sight now attempts to give the movie its proper due with a Blu-ray release that promises a new restoration from the camera negative. (I could swear that the company’s web site previously claimed the disc was mastered from a 4k scan, but references to that appear to have been removed.)

While it’s nice to see the film in high-definition, sometimes even all the remastering in the world can’t do much for a movie this cheap. The 2.35:1 picture is often frustratingly soft, with dull colors and contrast. The framing also looks very cramped, like the image is zoomed-in and overly cropped on all four sides. On the other hand, it’s just detailed enough to see the wires in some of the FX scenes, and is watchable on the whole, certainly much more so than the DVD. I’ll take it.

The PCM 2.0 soundtrack is clear enough and occasionally a little rumbly, with piercing highs during laser blasts. It matrixes adequately to the surround speakers when decoded by the Dolby Surround Upmixer in my receiver.

Note: The Blu-ray is locked to Region B and will require a compatible Blu-ray player to function. 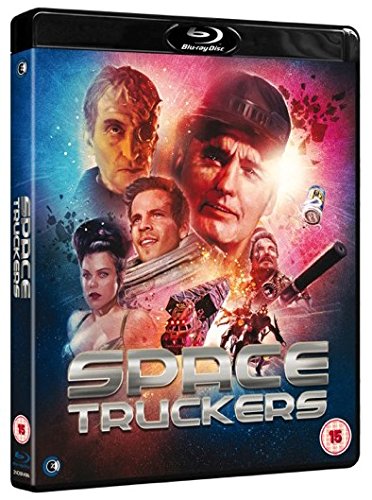