Although it wasn’t much of a box office smash back in 1998, John Frankenheimer’s action thriller Ronin eventually became a cult hit on video, largely due to its terrific car chases. The film has been released on Blu-ray twice to date – first by MGM in 2009 and then in 2017 as a remastered Special Edition from Arrow Video. A recent Arrow sale at DiabolikDVD gave me an opportunity to pick up and watch the latter.

Once an old-guard Hollywood master who’d made lasting classics such as Birdman of Alcatraz, Grand Prix, and of course The Manchurian Candidate in the 1960s, director John Frankenheimer struggled in later years and, by the late 1990s, had literally not had a box office hit in decades. A long string of flops including 52 Pick-Up, Dead Bang, and the disastrous The Island of Dr. Moreau might have crippled or ended another filmmaker’s career. Fortunately, Frankenheimer had more success on television during this period, taking home four back-to-back Emmys from 1994 to 1998. The fact that he could quickly follow a bomb like Moreau with the acclaimed George Wallace TV movie is likely what kept him working even when his theatrical features amounted to one money-loser after another.

Despite its Japanese title, Ronin returned Frankenheimer to France, where he’d made several previous movies including his last profitable picture, 1975’s French Connection II . The story takes place primarily in Paris with a side-trip to Nice. The heist thriller has a convoluted plot filled with twists and double-crosses, that’s nonetheless remarkably simple at its core: A team of highly-skilled mercenaries (Robert De Niro, Jean Reno, Stellan Skarsgård, Sean Bean, and Skipp Sudduth) are brought together by a mysterious woman named Deirdre (Natascha McElhone) and hired to steal a briefcase. Deirdre will not tell them the contents of the briefcase or identify her employers. All the men need to know is that the MacGuffin inside the briefcase is important, and that attempts to steal it will face heavy resistance. Beyond that, each man has a specific skill-set and they will all be well compensated for their efforts. Naturally, their plans wind up complicated by betrayals both within the group and external. It wouldn’t be much of a thriller if everything went smoothly.

The movie’s script is credited to the names J.D. Zeik and Richard Weisz, but “Weisz” is well known to be a pseudonym for David Mamet, who was brought in for a late rewrite to expand De Niro’s role. First-time screenwriter Zeik claimed that Mamet’s work amounted to a superficial touch-up on his story, but Frankenheimer contradicted this and gave all the credit to Mamet. Watching the film, Mamet’s imprint is obvious, especially in the character dialogue, which largely consists of terse and cryptic exchanges among professionals speaking an almost coded lexicon. Even if he didn’t actually rewrite the whole thing, Mamet snuck plenty of his distinctive voice and style into it.

The plot machinations are all logically constructed but ultimately don’t lead anywhere especially innovative or original. That may well be deliberate. The movie is clearly intended as a genre exercise with little pretense of depth beyond stringing together a series of shootouts and car chases. To that end, Frankenheimer stages a bunch of great ones. The car chases in particular are really thrilling, choreographed and shot in a very clear, no-bullshit style that forgoes editing tricks or visual effects (beyond some digitally-added smoke around squealing tires, which hasn’t aged well and frankly looked pretty bad even at the time) in favor of simply great stunt work. Ronin is one of the all-time great car chase movies, widely held in the same esteem as Bullit or The French Connection, and it delivers not just one great chase but several spaced throughout its length. For that reason if nothing else, it has held up as reliably repeatable entertainment for the last twenty years, and I had a lot of fun revisiting it on this watch.

For the Special Edition reissue, Arrow Video struck a new 4k master for Ronin, scanned from the original camera negative and supervised by director of photography Robert Fraisse. I sat down quite excited to watch it. For some reason, I had it in my head that MGM’s 2009 Blu-ray edition was a DNR smear-fest. Our reviewer David certainly didn’t think much of that disc at the time. Looking at it again for a comparison, however, I honestly don’t think it’s that bad. DNR doesn’t seem to be an issue so much as just a generally drab appearance with dull colors.

The Arrow remaster is better, to be sure, but it’s not dramatically better. In a lot of respects, the two discs look basically the same. The movie still has very muted colors and flat contrast, which I now have to assume were intentional. Fine detail in the new transfer is improved a modest amount, but I don’t feel that the old disc is unwatchable. Given the choice, I’d certainly go with Arrow, but I’m not sure how compelling an upgrade this is for someone who already owns the prior Blu-ray. 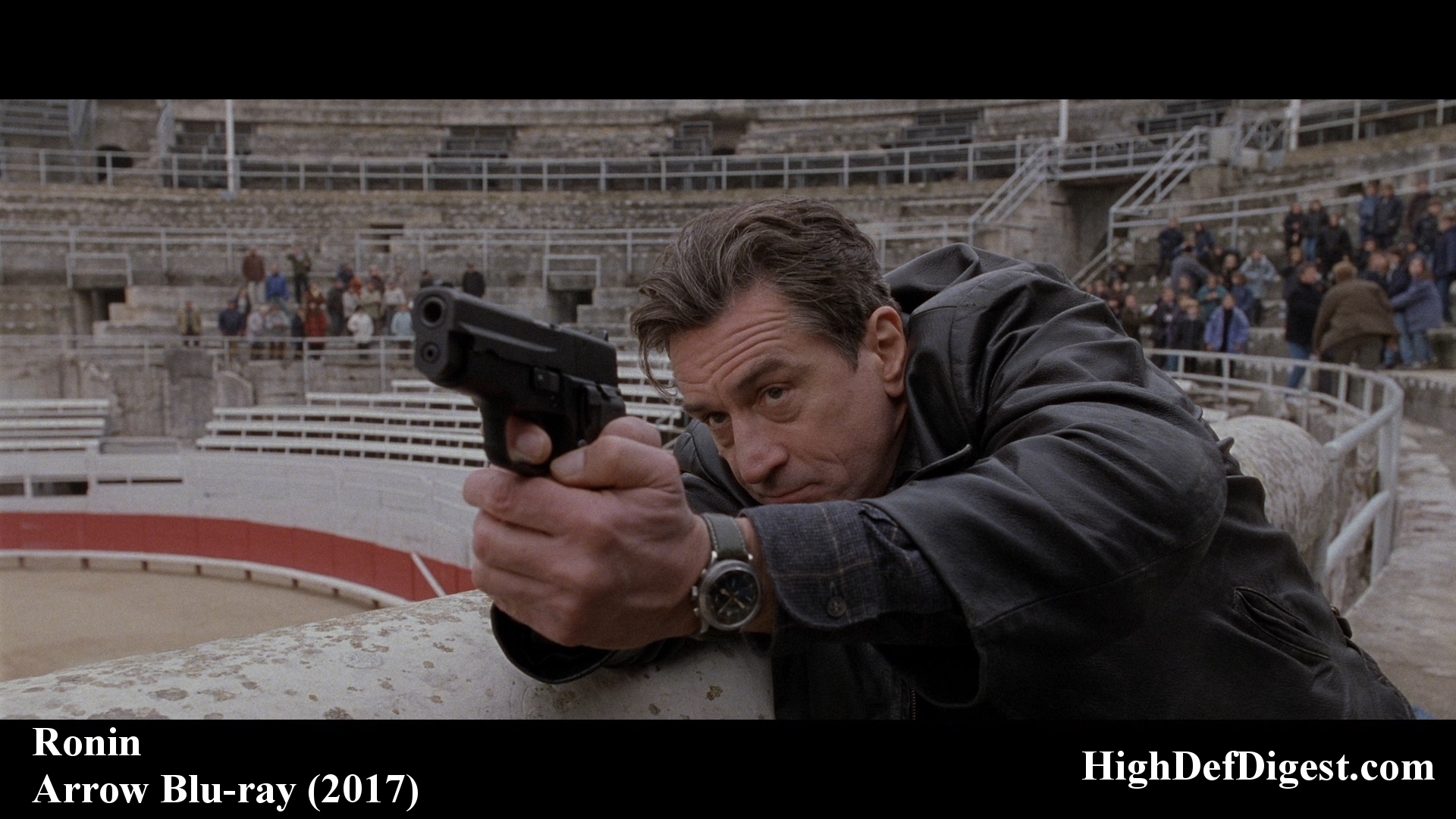 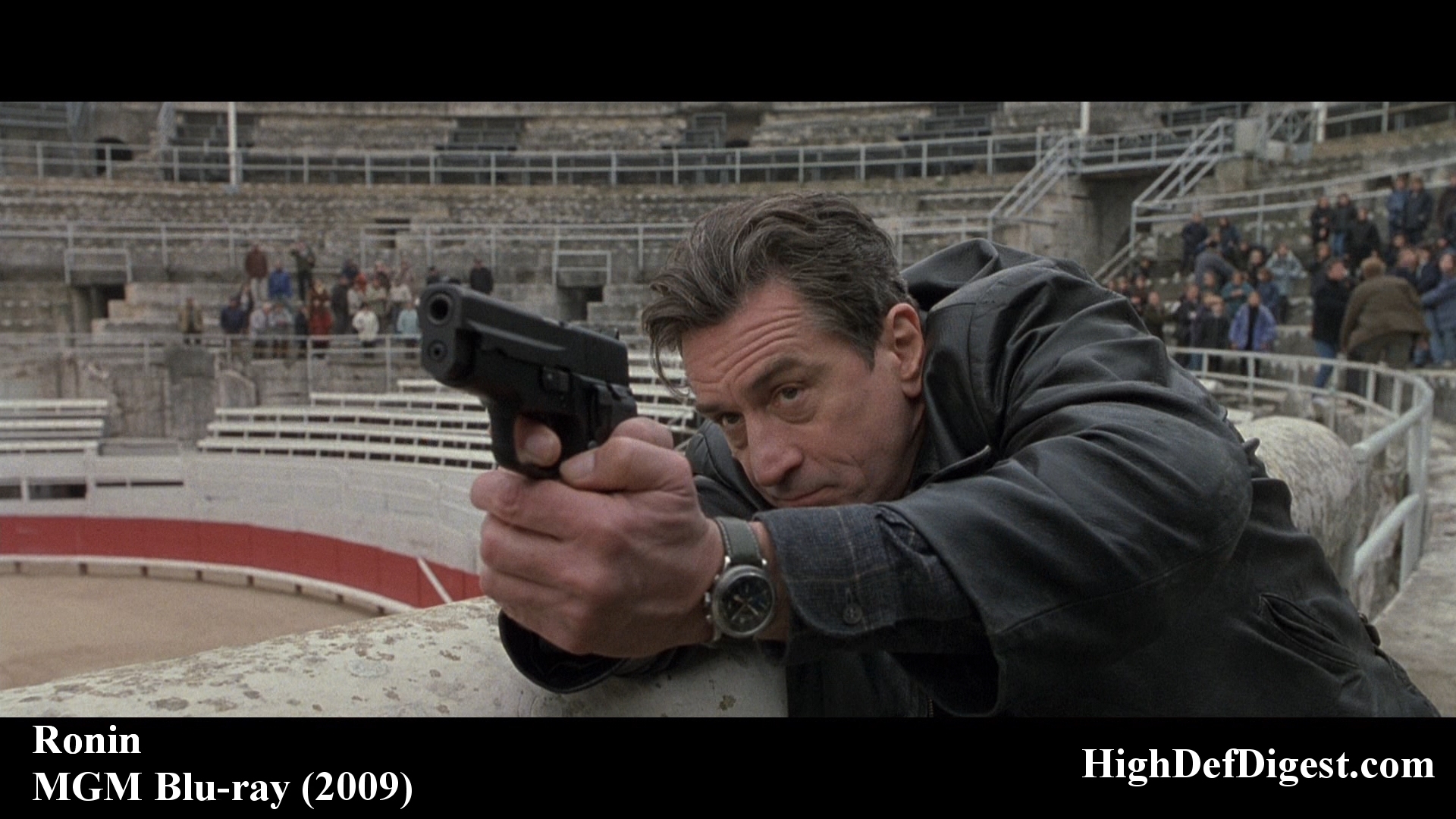 In terms of audio, Ronin has a very energetic 5.1 mix that makes creative and effective use of the surround channels during the action scenes, placing viewers right in the center of the gunfights and car chases. I had a memory from the days of it being a DVD staple that the movie’s soundtrack was also very bassy, especially in the drumming musical score and the various crashes and explosions. That’s not really the case in Arrow’s DTS-HD Master Audio track, unfortunately. Some of the music throbs a little, but bass doesn’t extend especially deep. I found this disappointing. I put in a few scenes on the MGM Blu-ray for comparison, and that did seem to have a little more bass. However, I didn’t have a chance to compare the two discs extensively, and it’s possible I may have just been hearing a simple volume difference. 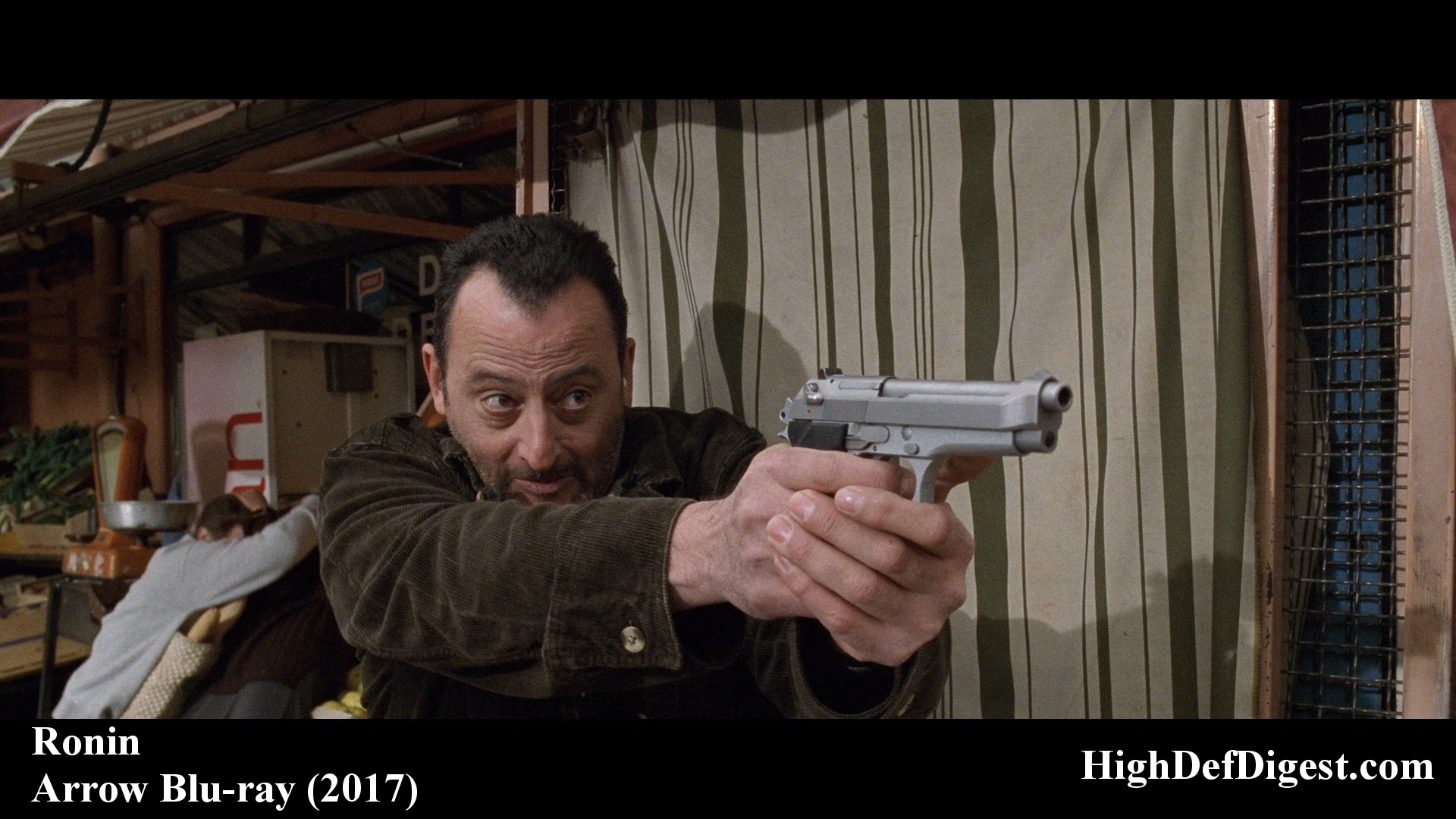 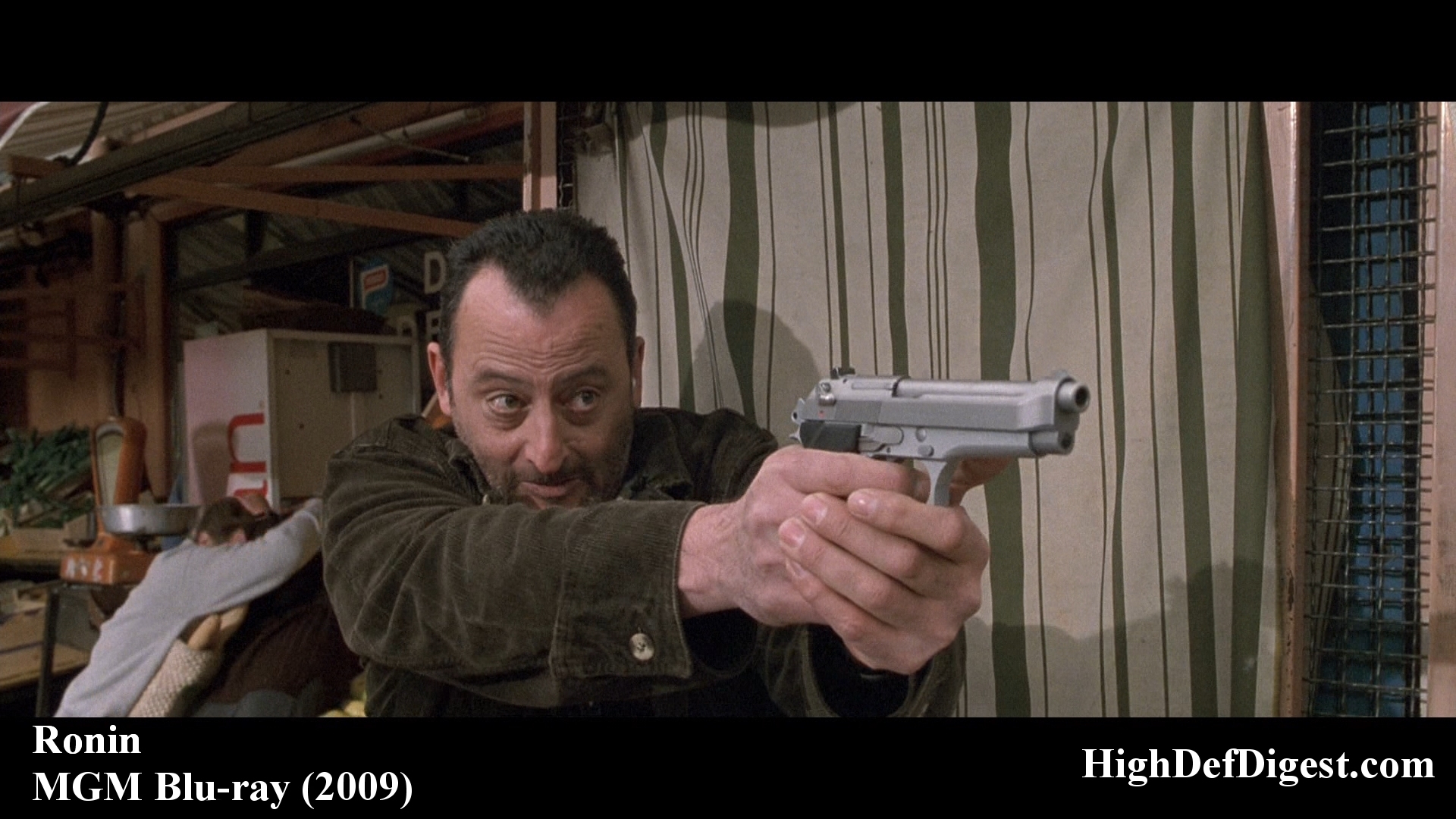 One area where Arrow decidedly outshines MGM is the bonus features. The 2009 Blu-ray had only a trailer, dropping a host of supplements from the studio’s own 2006 Collector’s Edition DVD. Arrow restores most of those items, including an audio commentary by John Frankenheimer, an alternate ending, a half-dozen featurettes, and some cast interviews from the Venice Film Festival. Brand new is an interview with DP Robert Fraisse, and Arrow also dug up a 1994 “appreciation” for star Robert De Niro by his Jackie Brown director Quentin Tarantino. 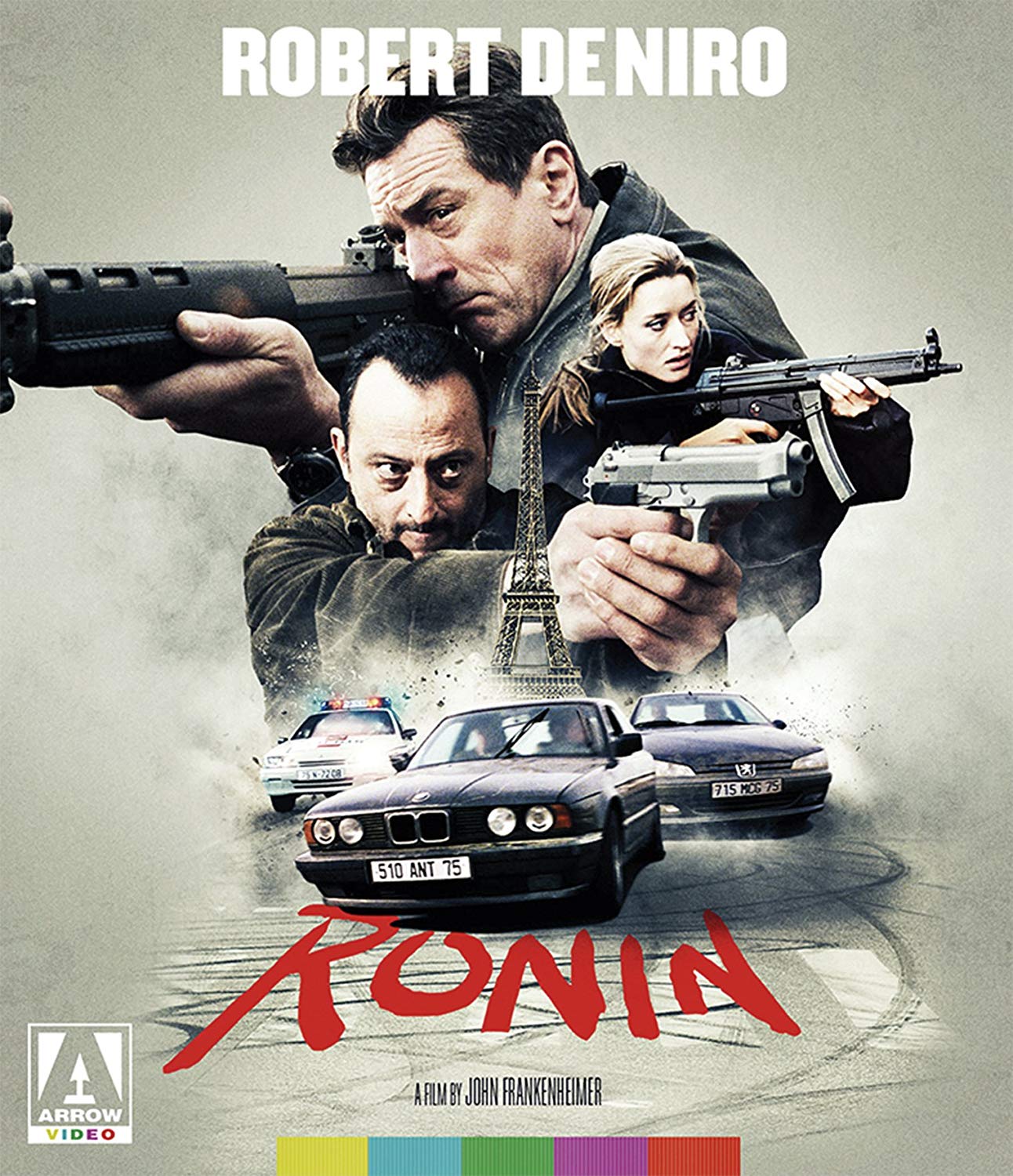