Back during the height of the TV-on-DVD era, I got hooked on watching an anime series called ‘Noir’, which followed the adventures of a pair of female assassins traipsing through Europe killing lots of bad people. Unfortunately, I got sidetracked around one of the middle volumes and never finished the show. That long bothered me, so I recently picked it up again on Blu-ray in order to finally see it through to the end.

‘Noir’ is slightly unusual for anime, in that the story is set primarily in Paris with trips through other European countries, and has no connection to Japan at all. I’m personally a stickler for watching all movies and TV shows, even animation, in their original languages. In this case, I concede that it creates a bit of cognitive dissonance that all the characters on the show speak Japanese in settings where that language is very uncommon. If anything, an argument can be made that the English dub is somewhat more realistic, since English is widely spoken throughout Europe. However, I sampled a few minutes of the dub and found the voice acting there so terrible that I had to switch back to Japanese, despite concerns about plausibility. I got over it quickly enough and settled in with the Japanese. (Sadly, the Blu-ray does not offer a French dub.)

The show’s lead character is Mireille Bouquet, a fashionable twenty-something businesswoman whose profession happens to be contract killing. She’s very good at her job, using her youth and good looks to disarm victims who’d never expect her to be a killer. The show spends very little time debating the morality of her career as a straight-up murderer. We accept that most of her targets are bad people who deserve to die.

In the pilot episode, Mireille encounters a young schoolgirl named Kirika who suffers from amnesia and has no memories of her identity or her past. (She only has a name by virtue of a school ID card that’s probably a fake.) Nonetheless, Kirika is drawn toward Mireille and quickly demonstrates her own proficiency in the art of killing, which matches or exceeds Mireille’s own. The girl takes no pleasure in the act; it’s merely an instinctual reaction when very bad men chase after her meaning to do harm for reasons she doesn’t understand. In the span of the show’s first half-hour episode, Mireille agrees to help Kirika uncover the secrets of her past, and takes the girl under her wing as a business partner in a new agency she names “Noir.”

That pilot episode is fantastic. It’s sleek and atmospheric, and makes great use of the scenic Parisian locations. The action scenes are very exciting and stylishly choreographed, played to a terrific musical score. In some ways, it feels like an animated version of Luc Besson’s ‘La Femme Nikita‘ with an added mystery plot to draw you in for long-term viewing. I could watch that episode a hundred times and never tire of it.

The next batch of episodes after the premiere establish an assassination-of-the-week formula in which Mireille and Kirika accept assignments that force them to find clever ways to kill increasingly difficult targets. Unfortunately, almost immediately a sense of repetition sets in. The show’s pacing becomes awkwardly stilted, and episodes are burdened with lengthy flashbacks to events we may have witnessed just one episode earlier. Even the show’s excellent musical score seems to actually only have three or four distinct tunes that get reused over and over. The episodes are still fun, but less memorable.

I find that binge-watching only draws attention to these flaws, and the show plays better if you take it one episode at a time with a buffer between each. I think it was around this section that I originally lost my place. It wasn’t that I lost interest, necessarily, but I’d been buying each DVD volume as they came out and had a hard time continuing to spend that money on a product that didn’t always give me instant gratification. When the show was finally released on Blu-ray as a Complete Series package for a fairly reasonable asking price, that was exactly the excuse I needed to revisit the series.

As the story goes on, it eventually moves away from the assassination plots in favor of a convoluted conspiracy storyline involving an Illuminati-style secret society bent on world domination. In a plot twist that honestly makes no sense at all (the show’s writers either forgot or chose to deliberately ignore the fact that Mireille and Kikira have an obvious age difference of around ten years), both the lead characters turn out to have hidden ties to that organization and to each other since a shared childhood. The narrative turns frustrating during all of this, and introduces a number of silly anime story tropes and character types that clash with the grounded atmosphere of the early episodes.

The show also has an icky and uncomfortable element of sexualizing Kirika and another clearly underage character. I could do without that.

All that said, I don’t mean to harp on the show’s negative qualities. Even despite these issues, it’s still an entertaining series. Even the worst episodes have a lot of great action scenes. When it’s cooking, the show is great fun, and at its best it manages to work in some compelling character development too. I’m glad that I finally found the time to watch the whole thing, even if it doesn’t quite live up to its potential. 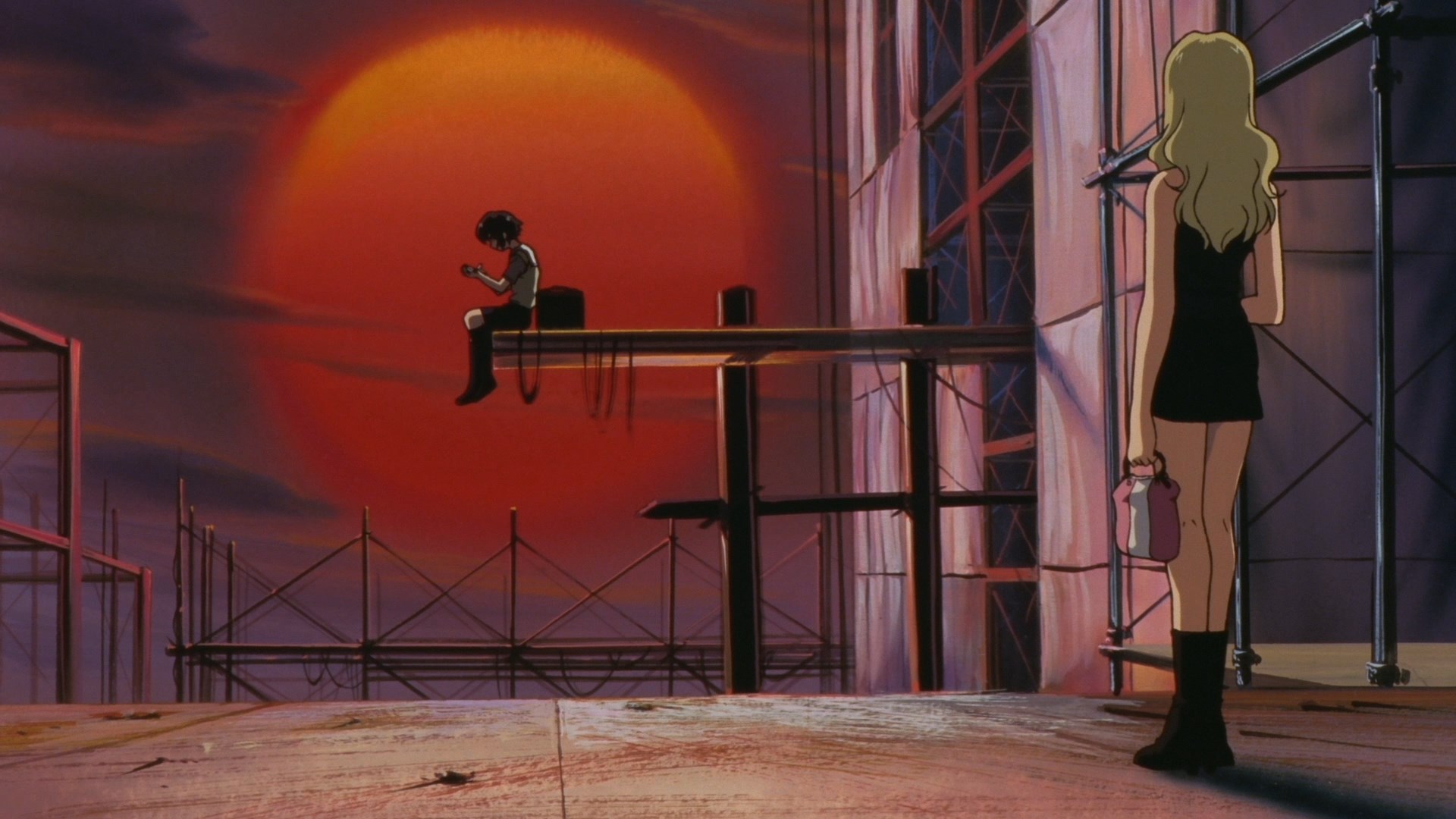 FUNimation released ‘Noir: The Complete Series’ on Blu-ray in April of 2015. The show’s 26 episodes are crammed onto three Blu-ray discs – nine episodes on each of the first two discs and eight plus some bonus features on the third. All three discs are annoyingly burdened with forced trailers for other FUNimation licensed titles before the main menu. A fourth disc in the package is a DVD with the rest of the supplements.

The 16:9 video is true high-definition, not an upconversion (as happens with some anime from this period). It looks very good for the most part, though the heavy compression leads to some issues with video noise at times. It’s not too serious and is forgivable.

Both the Japanese and English audio options are provided in lossless Dolby TrueHD format. Regardless of which you choose, the opening and closing credits songs are always in Japanese with forced English subtitles. (Don’t bother reading the lyrics. They’ll just drive you mad trying to make sense of them.) The show has a stellar 5.1 sound mix with throbbing bass and very aggressive surround activity. A lot of care was clearly taken to ensure that all of the guns seen on screen have distinct (and I presume accurate) sound effects when fired. They sound amazing. Aside from the song lyrics, the subtitle translation is coherent and seems appropriate.

Bonus features include a couple of episode commentaries with the English voice actors, dated interviews with both the Japanese and English casts, some pointless music video clip montages, and textless (though still subtitled) opening and closing credits. None of this is worth a damn. The only thing worth watching is a sock puppet parody video called ‘Noir: The Unsoled Story’ that has a couple of amusing gags, but outstays its welcome at eight minutes. 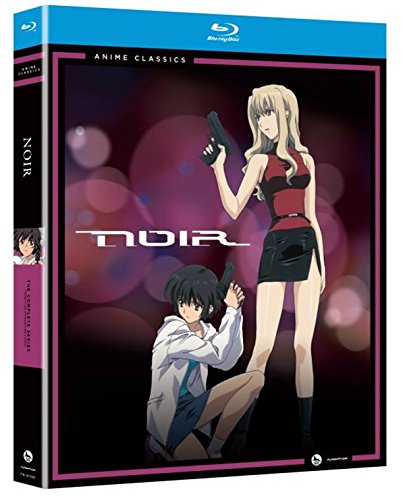 TagsAnime Blu-ray Noir Off the Shelf