In the wake of all the 3-D news that’s been rolling out, something’s been bothering me. Something apart from all of the usual complaints about 3-D glasses. It took a while, but I finally put my finger on it. 3-D manufacturers are actually putting out glasses with replaceable (not rechargeable) batteries. Talk about inconvenient!

I’m not a fan of 3-D movies yet. I’m sure if the trend continues, I’ll change my tune at some point in the future. You know, once a good director takes a successful stab at 3-D production that actually benefits the movie. But I get why some people are, and that’s fine. I understand 3-D capable televisions coming without glasses and I understand 3-D glasses and transmitters being sold separately, even if the price does seem awfully high. 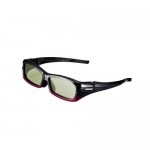 The one thing I don’t get is this: Who on earth thought it would be a good idea to make non-rechargeable 3-D glasses? Apparently Sony, Panasonic, LG and most other makers of active shutter glasses. The only television manufacturer that even offers rechargeable glasses is Samsung.

Why are rechargeable glasses a big deal? Because I can’t imagine anything more annoying than having to get up in the middle of a movie to change the battery on your glasses. That’s if you stocked up – otherwise you’ll have to run out to Radio Shack to find the right battery for your 3-D glasses. Manufacturers boast hundreds of hours of battery life, which is fine, but all we really need is, at most, eight.

We’re a society that’s used to the idea of plugging things in at night. We sync and charge our iPods when we get home from work. We plug in our phones, our MP3 players and our handheld gaming systems. We pop rechargeable batteries into battery packs and we plug in our PS3 controllers. We, as consumers, get the whole recharging thing. At this point it seems built into our very nature.

The idea of taking off 3-D glasses and plugging them in when not in use is very basic. So what if the battery life is only eight hours? Most folks are only going to be watching for a few hours anyway. A smaller, rechargeable battery just makes so much more sense. 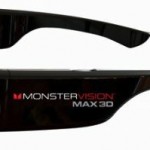 The biggest surprise is that Monster Cable seems to be the only company making glasses that actually serve the consumer. That’s right, the same company that brings you overpriced cables of all kinds. The Monster Vision Max 3D Glasses, along with Monster’s own transmitter, are compatible with every 3-D television out there. They use RF signals for 3-D sync so, unlike with IR signals, you’ll be able to turn your head without having to re-sync. And they’re rechargeable.

Monster’s glasses are surprisingly cheap too. They’ve got an MSRP of $169 a pair, which is $20 more than most 3-D glasses, but $40 less than that of Samsung’s rechargeable glasses.

It’s about time some of the 3-D television manufacturers get on this. It’s a topsy-turvy world we live in when Monster is offering a better product than anyone else, and at a cheaper price too!