The E3 Expo is happening this week. That means excitement, adventure and really wild things. Microsoft kicked things off as usual with an impressive press event, and ended with a giant announcement. There’s a new Xbox 360 model, and it’s shipping now.

How cool is that? Some folks can pull it off and others can’t. Sega couldn’t, obviously. When that company did the whole “and Saturns are on the store shelves now” bit at their press conference in 1995, it didn’t really pan out too well. Part of that, of course, was the fact that the Saturn was an all new system. The other part was almost certainly the price. Microsoft’s got both of those points taken care of.

The new Xbox 360 – which we’ll just call the 360 Slim for now – got announced, priced and dated at the end of the Microsoft press conference. The price is fantastic. At $299, it’s no more expensive than the current Elite models, but it can do a lot more. We can expect to see them on store shelves as soon as Friday. That’s a very strong move indeed.

So now that we’ve covered pricing and availability, let’s talk a little bit about the changes.

If you’re a fan of watching DVDs on your 360, you’ll be glad to know that the new system is “whisper quiet.” I sure am. The current optical drive and fans are a constant distraction .It’ll be nice to be rid of them.

There’s a bigger hard drive in the 360 Slim. It’s a full 250GB, which should be more than enough for your games in addition to whatever music and movies you plan on adding. One downside is that old and new hard drives aren’t compatible. That might not matter to most, but some people will find the change frustrating. One thing that I’ll definitely find frustrating is that old memory units will apparently not be compatible with the new system. 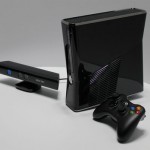 Microsoft has also added built-in WiFi to their new system. As a nice bonus, it’s 802.11n, unlike the 802.11g standard of the system’s early wireless adapters or the competing PS3’s built-in wireless.

Oh, and did I mention how utterly sexy it is? The new 360 looks sleek and slim and futuristic.

So there’s some downside, but there’s a lot of upside, and at a very reasonable price. Hey, if you don’t like it, the old models should all be getting a $50 or so price cut when the new ones hit store shelves.

But there’s one big question: What is Sony going to do to top this? “Move” won’t be enough to get the core audience excited, and there’s no chance of a new PS3. The biggest rumors surrounding the company over the last few days are that of a PSP2 (which could be a very popular announcement) and a paid PlayStation Network (which would not).

What’s Nintendo going to do? The same thing they always do. Trot out sales numbers, show games that look awful, and then show one thing that gives everyone hope. The 3DS has a lot of potential, but it’s ‘Zelda’ that’s really exciting. If they show it, anyway.