We’re over halfway through the season for NBC’s Thursday night comedies, and it’s about time to look back and review.  The last three weeks have had plenty of ups and downs, so here’s a look at what’s been going on before we move ahead with four new episodes tonight.

‘The Science of Illusion’

With April Fool’s Day coming up, Britta set out to prove that she’s not the buzz kill the rest of the group says she is, but without much success.  While prepping for her prank, she accidentally sends a corpse out of a window.  Shirley and Annie are tasked with finding the perpetrator, and Britta tries to frame Winger.

The episode didn’t have a great showing from Winger or Britta, and the Pierce side story left a lot to be desired, but it left plenty of room for Annie and Shirley to shine.  When teamed up in the investigation, the two fail to form the “good-cop bad-cop” paradigm, instead both fighting to be the bad cop.

Not unusually, the best jokes in the episode came from Abed, filling in dialogue for characters that weren’t properly fulfilling their stereotypes.  Abed taking on the role of the grizzled police chief was absolutely hysterical.

The writers of this particular episode should be applauded.  Giving Abed the lead 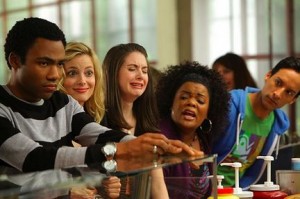 in an episode that’s a direct movie parody was a great idea, and one I hope they’ll continue in the future.

The whole episode was a loving tribute to ‘Goodfellas’ with a little bit of ‘The Godfather’ thrown in for good measure.  Abed became the kingpin of a conspiracy to traffic chicken fingers, the only thing good ever served in the school’s cafeteria.

Some of the finest moments of the episode weren’t jokes, but homages to the aforementioned gangster movies.  Abed’s narration, the ‘Goodfellas’ style tracking shot, and a wonderfully staged moment with Pierce kissing Abed’s hand were the highlights of the show.

Of course, you have to have seen ‘Goodfellas’ to really understand what was going on.  If you haven’t, please do yourself a favor and watch it.

It’s been a hit and miss season for ‘Parks and Recreation’, but ‘Summer Catalog’ was a big hit. Though the other characters’ stories are always important, it’s Leslie Knope that’s the real heart and soul of the show. When it all comes down to it, ‘Parks and Rec’ is all about Leslie’s unflappable enthusiasm, and almost childlike naivety. 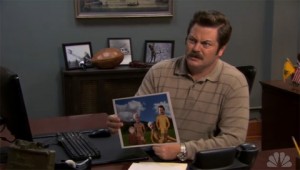 ‘Summer Catalog’ featured some really funny moments. Tom took on the role of fashion photographer in hopes of leveraging the summer catalog cover opportunity into bigger and better things, but had absolutely no luck getting a good photograph of Ann. “For someone so hot, you sure are bad at looking hot.” Andy and April, in the meantime, finally started to understand exactly what was starting to happen in their burgeoning relationship, and it all ended a bit awkwardly.

The highlight was Leslie’s plan to reunite all the former heads of the Parks Department as inspiration for the intro letter to the summer catalog. The combination of an old stoner, a bureaucrat who clearly hated the park system, and a sexist old man made for a maddening bunch, and it was a treat to watch Leslie interact with them.

It’s the 21st episode of the 6th season of ‘The Office’ and I can’t help but wonder if the well has begun to run dry. There was a lot happening in this episode that we’ve seen before, but not much in the way of actual content. 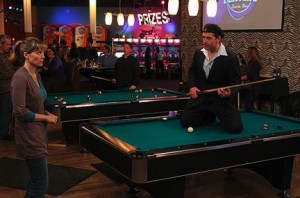 Oscar arranges an outing for the office and warehouse staff in order to get closer to his crush Matt. Jim attends with Pam , who brings a friend named Julie who she attempts to set Michael up with. All goes well until Michael realizes what’s going on, after which he turns into “Date Mike.” There’s an Andy and Erin side story in which the pair goes public, but it’s not particularly funny or revealing. The Oscar and Matt storyline is equally weak, and it just feels like the something we’ve seen already.

Dwight ran into Isabel, which made for an interesting interaction between Dwight, Isabel, and Angela. After being spurned for Isabel, Angela said she’d sue Dwight if he broke the contract they signed, but there really wasn’t much to it. It would be nice to have Isabel as a regular companion to Dwight; his humor works best when he’s got someone normal to compare to. Being constantly paired off with quirky characters makes his quirky nature seem less unusual.

The biggest downer of the episode was Michael. He was entertaining early on, but when he switched to “Date Mike” to impress Pam’s friend, it just got awkward. It didn’t make me laugh, it just made me cringe. Even worse, he seems to have been rewarded for his behavior at the end, which means we may see more of “Date Mike” in the future.

I generally enjoy Kevin in the show, but only in very small doses.  A cartoony character like him can get really old really fast.  There’s also the danger of running into the same thing that ‘The Simpsons’ did.  It’s funny when Homer is stupid, but it’s not funny when he’s unbelievably stupid.  In ‘Secretary’s Day,’ Kevin crossed the line.

After being made fun of in a parody video made by Oscar, Kevin recruits the help of Gabe.  If you don’t remember who Gabe is, you’re not alone.  As he puts it, “a lot of people still think I’m the IT guy.”  There’s a bit of a subplot with Gabe trying to assert his authority, but there doesn’t really seem to be a point to it.

The main focus of the story, though, was on Erin and Andy.  At the insistence of Andy, Michael takes Erin out to lunch for Secretary’s Day and accidentally spills the beans about Andy’s relationship with Angela.  Erin is not amused, to say the least.

The episode ends with what looks like the end of the Andy and Erin relationship and what could be the beginning of one between Erin and Michael.  Erin and Andy play off each other well in most episodes, so it’d be a real shame to kill off that relationship prematurely.

I’ll make no secret about it, I’m a big fan of ’30 Rock’. It’s impressed me from the onset, but the show definitely has its weaknesses. The one thing that can take an otherwise serviceable episode of ’30 Rock’ and make it bad is when it crosses the line from silly to unbelievable. This one got close. 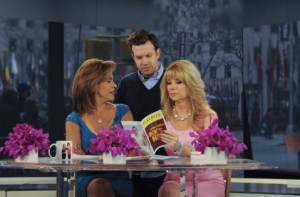 Jenna and Tracy having Kenneth related dreams and deciding to “Elm Street” him by killing him in their nightmares was goofy – not really a laugh out loud segment. Earlier in the episode, Kenneth was tasked with telling the two an endless stream of his stories, putting him in their heads. Though the outcome was a bit dull, Kenneth’s stories were brilliant. They’re a bit reminiscent of the ones Grandpa Simpson used to tell, but with more of a conservative undertone.

The whole Floyd and Liz storyline was solid enough. Floyd getting drunk on Jack Daniels fish sauce was entertaining at first, but it got old fast. The best Liz moment came in the opener though, when she revealed that she had been meeting men on the Kraft food website.

I’m usually really supportive on a Frank, Toofer and Lutz story, but this one didn’t really do it for me. Pulling a prank on Danny was a solid bit, but the escalating prank war didn’t end up quite where it should have. Taking Jack’s power away from him seems like a good way to get a few laughs, but all it really does is weaken the character. It was nice to see Danny and Jack team up a bit though, and to see a surprisingly nonchalant Danny during the prank-off.

We got two episodes of ’30 Rock’ last week at the expense of an episode of ‘Parks and Recreation,’ and the tradeoff was pretty good.  The first, ‘Lee Marvin vs Derek Jeter’ was particularly good.

Jack is still torn between Avery and Nancy, and ends up spending different parts of the weekend with each while not letting the other know.  It was a pretty strong story for Jack, if a little lighter on the humor.

Liz ends up helping Jack out with the situation by taking Nancy to a YMCA singles night, which, because it’s Liz, goes badly.  Nancy offers some advice on men while Jenna tries really hard to impress the guys there, and fails miserably.  The singles dodge ball sequences were well worth watching. 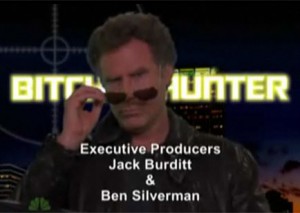 There’s a time and a place for comedy about current events.  It belongs on weekly live shows like ‘Saturday Night Live,’ nightly shows like ‘The Daily Show,’ and even on shows with quick turnarounds like ‘South Park.’  It doesn’t belong on a show like ’30 Rock.’

It’s not that the Conan and Leno thing wasn’t funny, it’s just that it’s already been done to death.  It would have been great a few months back, but it just feels like ’30 Rock’ was beating a dead horse.

The story about Liz throwing a bridal party was fine, but it didn’t really pop.  There were a couple of good gags in there, and seeing Liz dressed up to defend herself against a vicious dog was definitely worth a laugh.

Luckily though, there was Tracy.  Some of his funniest moments aren’t even jokes, they’re just acknowledgements that the show is going down a well worn sitcom path, or even little subtle word confusions.  I couldn’t help but laugh at “This better be meat-man, I’m importing!”

There’s also something amazing about the way Tracy pronounces the word “Quarry.”