Here we are in the second round of Movie Madness. We’ve separated the strong from the weak, and now we’re left with a group of contestants who have been whittled down to a trim 32. Vigilante Paul Kersey moved through on Wednesday along with crazy Jack Torrance. Now it’s time to get down to the nitty-gritty. Time to make the tough choices. Time to start sending characters we care about to the proverbial grave. Today, we start out the second round with Han Solo versus wizard boy wonder Harry Potter, while Scott Pilgrim goes up against the dark Sith Lord himself, Darth Vader.

We’ve already discussed every character’s weaknesses and strengths, so I don’t really want to retread that ground. In the second round, we’ll be focusing on what tools each of these characters use to dispense death.

Scott Pilgrim – Going up against fan-favorite Darth Vader is going to be difficult, if not damned near impossible for Scott Pilgrim. It’s going to be a tough road to travel. Pilgrim may be able to take on any of Ramona’s exes, but she never dated Vader (that we know of).

Tools of the Trade: Pilgrim uses his spontaneous fighting abilities to dispatch opponents. If Vader whips out that old lightsaber, Pilgrim will be able to one-up him (literally) by pulling out a flaming pixilated sword.

Darth Vader – A scrawny kid from Toronto going up against the dark emperor of the known galactic universe? Doesn’t seem like that fair of a fight, does it? Pilgrim may have a bunch of fancy moves, but Vader’s got The Grip.

Tools of the Trade: His lightsaber is just one of the many weapons Vader can use. He’s got the dark side of the Force, which gives him the ability to strangle people without even touching them. He’s also adept at building large weapons of mass destruction (though they tend to be easy to destroy).

Han Solo – Solo is another odds-on favorite to go far in this tournament. I wouldn’t be surprised if we end up seeing a Darth Vader/Han Solo final. Until then, Solo has a tough road ahead of him, fanboy support or not. This may be one of the hardest matchups out there. Solo has the backing of ‘Star Wars’ fans, but Potter has the backing of approximately one billion-trillion of his own fans worldwide.

Tools of the Trade: He uses his blaster efficiently (better than anyone else in the ‘Star Wars’ universe, who all seem to just shoot wildly without actually aiming). He’s also captain of one of the most famous spaceships in the galaxy. But, will having a spaceship and being able to blast beams of energy really help him in a battle with Harry Potter?

Harry Potter – He had a relatively easy go in the first round against Zurg, but now Harry is going up against one of the most famous characters in cinema, ever. He’s going to need a lot of help to overcome someone as tough and well known as Mr. Solo.

Tools of the Trade: Harry knows magic, and has gotten better at using it over the course of the movies (even though Hermione could best him in most matches). His wand carries the power of magic and has defended Harry against the forces of darkness. Maybe if he were going up against Vader, this would be a fantastic advantage, but Solo isn’t really considered a force of darkness. Will this finally be the time where a convenient plot device doesn’t come to Harry’s rescue? We’ll see.

Here is the updated bracket with all of the winners from the first round moving on into the second round. What matchups are you most excited to see? 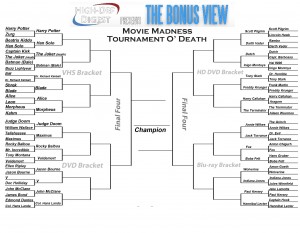