It was time to get organized. My movie collection had gotten far too large for me to remember everything I owned, and I’d already lost at least one title [so long, ‘(500) Days of Summer’] when I let someone borrow it and couldn’t remember whom I lent it to. I needed a cataloging program. After weighing the options, I decided to go with Movie Collector from Collectorz.com.

I’ve tried all sorts of cataloging software for my movie collection in the past, but I’d never found one that fit my needs. Many of the free programs seemed sorely outdated, or had way too many bugs for me to deal with. For a one-time fee, you can unlock the Standard or Pro versions of Movie Collector with a key code that will be emailed to you. Disclaimer: This software was not provided free for this review. I actually paid for it out of my own pocket.

I thought I’d provide a quick review of what Movie Collector does well, and the places it sorely needs improvement.

What drew me to Movie Collector was its streamlined interface. I’m a sucker for cool animations that display one’s collection easily. I think my favorite interface is the one on Delicious Library, but I’m not a Mac user, so I couldn’t get that one. 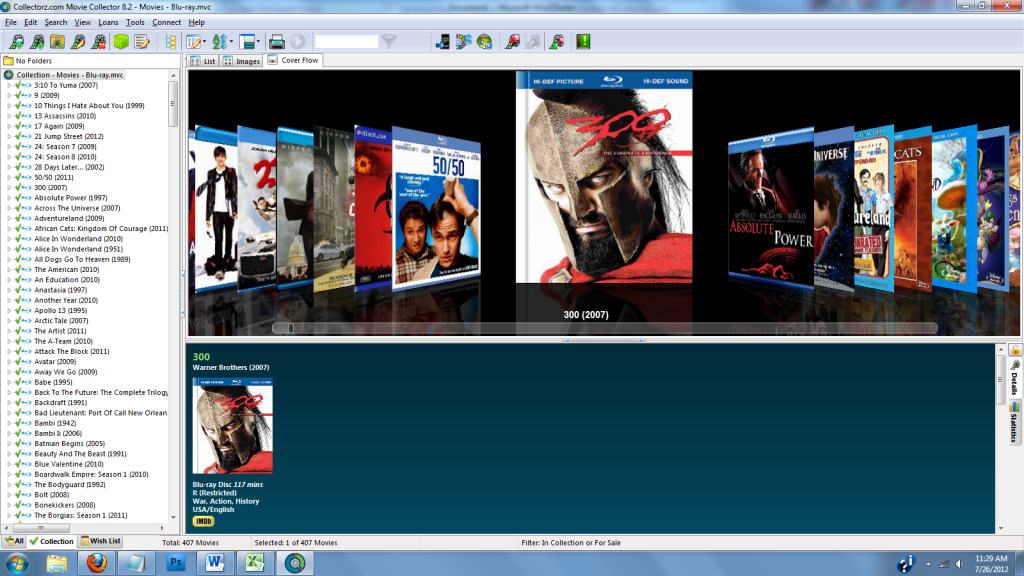 The interface is easy enough. The viewer at the top allows you to see your whole collection in a side-scrolling fashion. Movie Collector is also good at finding cover art for you. If the database doesn’t have an image already, you can easily look it up online, save it, and then upload it into your collection using the “Browse” function in the “Covers” tab, when you’re in “Edit Movie” mode.

Below the side-scrolling view of your collection is a window that allows you to see all relevant information about the disc or set you’ve selected. I have it set on the minimalist mode, as you can see in the picture above. However, the picture below this shows a different mode that uses a backdrop image from the movie (also editable) and provides much more information including trailers and such. 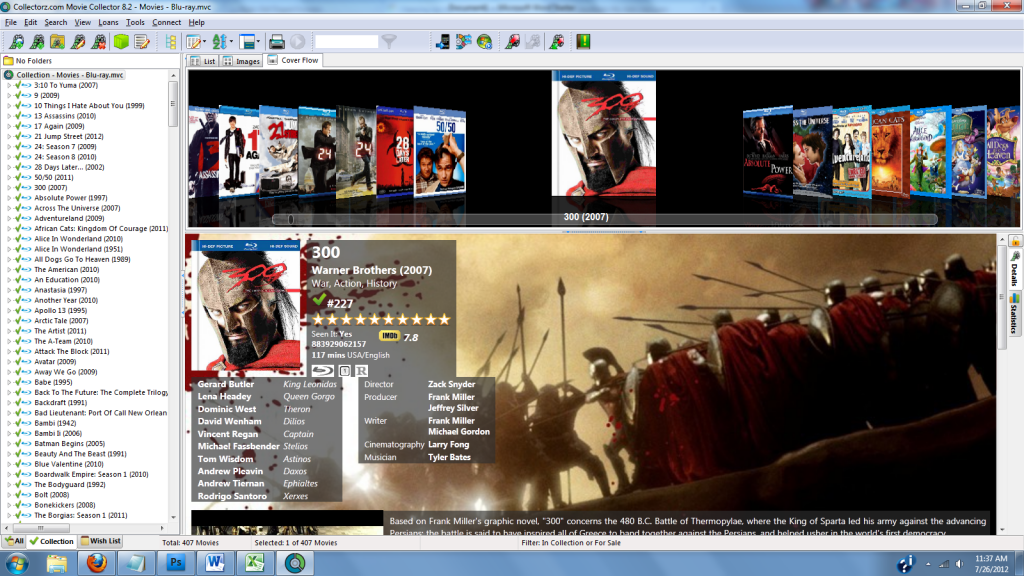 I think that this view is a little too cluttered for my tastes, but some may like the individual backdrops. I choose to go the minimalist route and simply have the main information displayed (run time, director, actors, etc.) with no backdrops.

Another nice thing about the software, which other cataloging software packages may also do, is that it can organize your collection by genre. Not only that, but it will sort by just about any criteria, including theatrical release date, Blu-ray release date, distributor, studio, personal star ratings and so on. 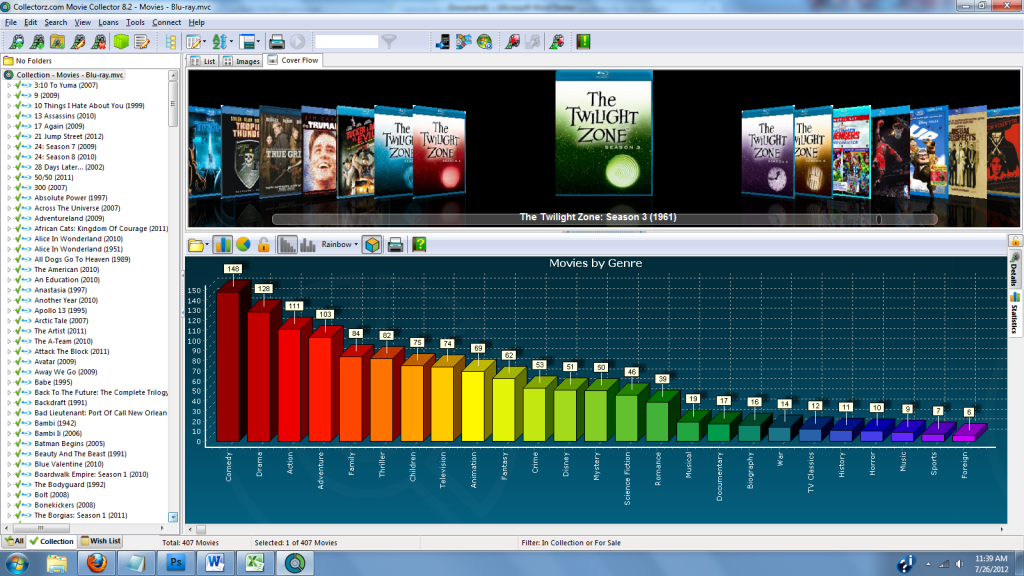 This is where I ran into some bugs that incessantly nagged at me. I entered my movies by their UPC codes. In the Standard set-up that I have, you can only do one title at a time. You need the Pro version to do batches of movies. Collectorz.com sells its own barcode scanners too, but they’re pricy. Annoyingly, if you want to use a mobile app barcode scanner, you have to purchase the Collectorsz special barcode app. You can’t just use any old free app, at least as far as I know.

Entering in movies by UPC is tedious, but not too bad. What I found annoying is that even though all the discs I entered were Blu-ray copies, numerous UPCs were listed as DVD in the database by default. I had to physically go into “Edit Movie” mode and change the format from DVD to Blu-ray. This didn’t happen on every disc, but it happened frequently enough to irritate me.

The software also has a bug involving cover art. Sometimes, images that I found online would disappear once I reopened the program. The database is usually good about finding cover art, but a few covers that I added by myself simply no longer existed the moment that I went back into the program. 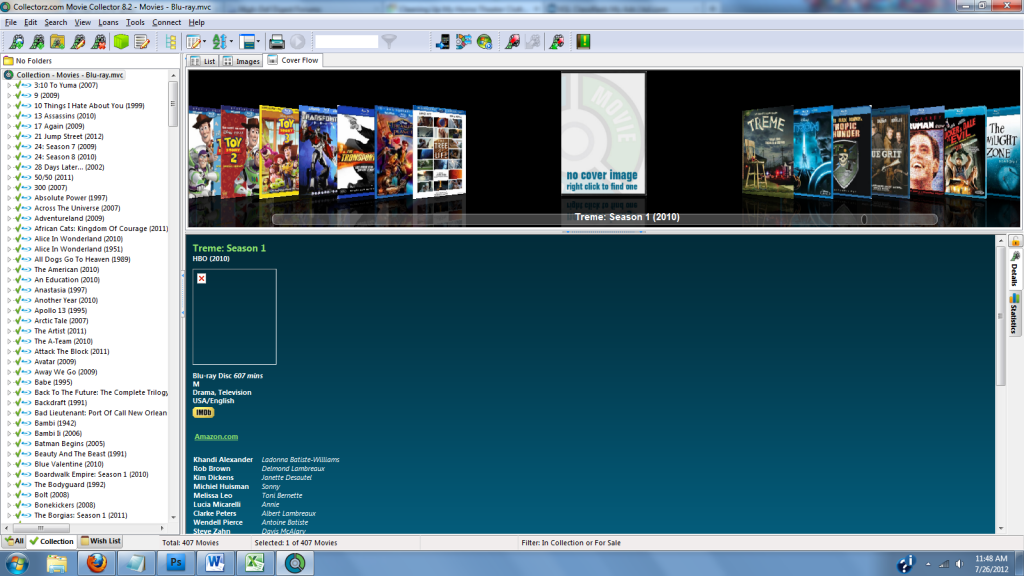 I think this has to do with the subfolder in Windows where you save the photos, but even the manual on the Collectorz.com website is confusing at times. Honestly, once you upload an image, the system should automatically copy that picture to its own files so it always has it on hand, rather than trying to pull the image from wherever it’s stored on your computer.

Other annoyances involve consistency. The database doesn’t provide all information for every movie you enter. For example, the “Edition” column is only haphazardly populated with descriptions like “Blu-ray” (or sometimes “Blue Ray”!), “Special Edition” or “BD-Live” on some discs, and nothing at all in others. Why it does this, I have no idea, but it’s pretty frustrating. To be fair, many of the other cataloging programs I’ve tried have these same kinds of bugs. 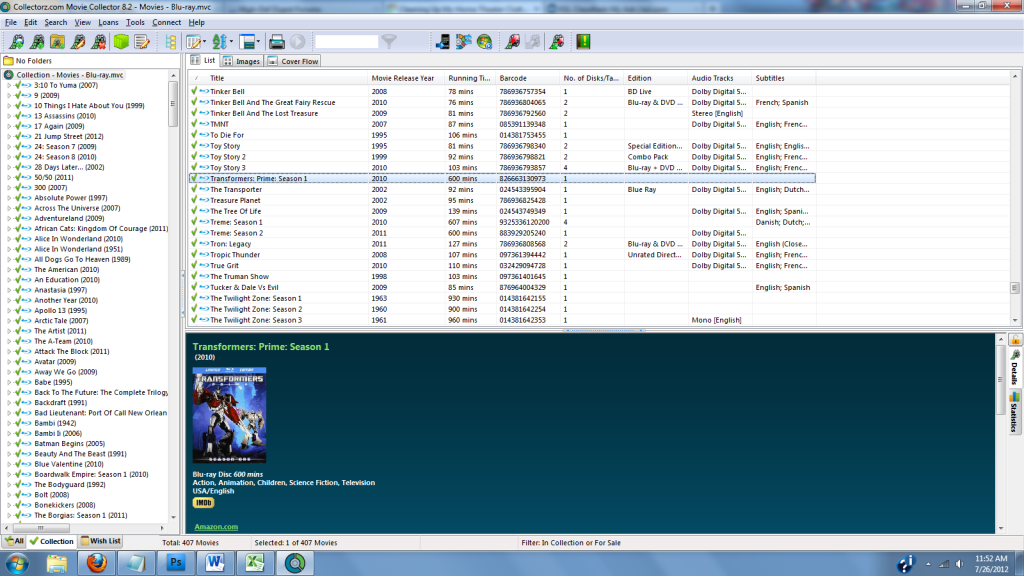 I liked this feature. Movie Collector lets you make all sorts of lists, by any type of sorting criteria you can think of. However, the “Box Set List” setting is incredibly confusing. Even the online manual fails to explain how to use it. Listing your box sets is supposed to allow you to enter each film individually and then group them together. This allows the software to create entries for each specific movie in the box set. However, the software should be smart enough to create six separate movie entries for something like ‘Star Wars: The Complete Saga’, or at least give the user the option to create those entries if desired.

The software also has a “Loan List” to keep track of movies you’ve lent to friends and family. As you can see in the below screenshot, Luke is on notice to get ‘Haywire’ back to me by August 13th or there will be hell to pay. I really wish I had this feature when I loaned out ‘(500) Days of Summer’ and never got it back. 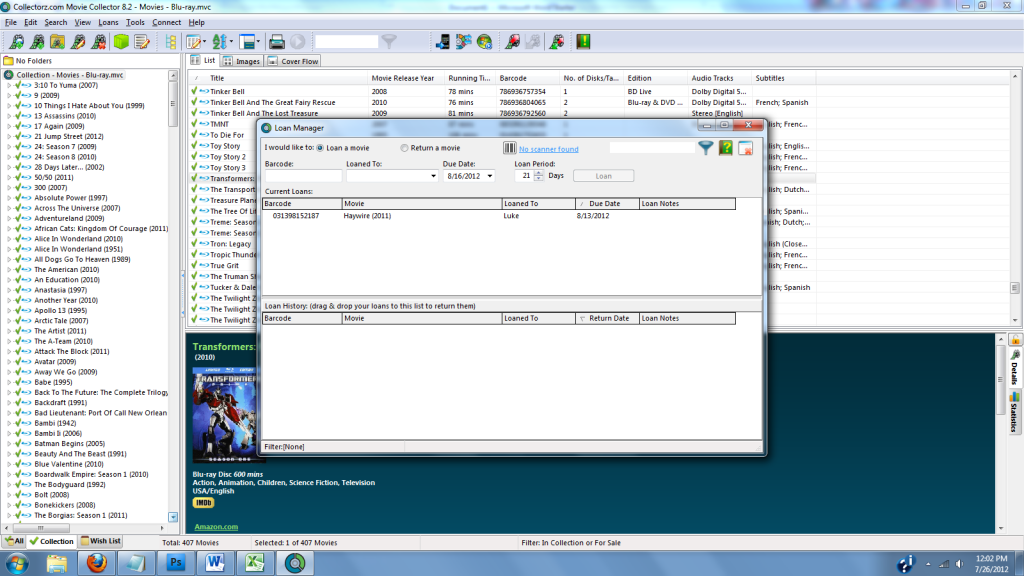 You need the Pro edition of the software to do any kind of meaningful exporting of your lists. Also, the software doesn’t export to Excel at all. This is a disappointment for me. I really wanted something that would port my list into an Excel spreadsheet, but this doesn’t do that.

Movie Collector does a decent job of sorting my Blu-ray collection, but (as with most database programs like this) it has some bugs and design annoyances. I still need to figure out a few things about the software. It has many, many more options than I covered here, but hopefully I’ve given you a good idea of what the software is like.

Yes, there are things that I wish Movie Collector did, or did better. There are bugs in the software that can be very frustrating. If I were to rate it, I think I’d give it a B-.

Have any of you used Movie Collector or a similar cataloging software? Let us know in the Comments below.