The final round of our TV Madness tournament last year only procured 106 votes. Last week’s Monster Madness final scared up almost five times that number. People care deeply about their movie monsters. While Godzilla and Predator stayed neck-and-neck for the first few days, Godzilla ended up pulling out the win. This was a battle for the ages.

Because movie monsters come in various shapes and sizes, we created separate weight classes in this tournament. An entire half of the bracket was dedicated to huge heavyweight monsters, a quarter of the bracket focused on middleweights, and another quarter put the lightweights up against one another.

I thought that the first round was full of some pretty interesting match-ups. Personally, I didn’t think Cloverfield would take out a Sandworm.

The Cinderella of the tournament had to be the Balrog, which made it as far as the final eight monsters. Balrog was able to take down Rhedosaurus (easy), the Mist Walker (hard) and Gamera. I still have no idea how he won that last one.

I was really surprised that Imhotep the mummy made it as far as he did. I thought he was a first round goner when he went up against the scary-ass Pyramid Head. I’m still that disappointed Pyramid Head didn’t make it past the first round.

Hitchcock’s Killer Birds also made an improbable run. Their last victim was Chucky. Yes, a bunch of birds beat Chucky! That was a huge win.

Putting Orochi and Cthulhu into the tournament are my biggest regrets. We didn’t have enough background on either monster, and I think people just voted on how scary their pictures looked. I’m sure that I could have found two more established big-ass movie monsters to take their places.

If you want to check out the finished bracket to see how the whole bloody affair shook out, click on the image below. Thanks for voting. This was a long, but very fun tournament. 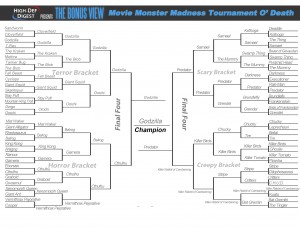