The four big takeaways from Microsoft’s E3 conference this year include the introduction and explanation of Xbox SmartGlass, the growing uses of Kinect, Internet Explorer for the 360, and an upcoming title line-up that’s consistent with this generation of games.

Xbox SmartGlass is indeed a real thing. The concept is to create an intelligent interface between television and movie watching and our smartphones and tablets. Microsoft feels that when you’re watching your favorite show in your living room, it’s likely that your nearby cell phone or tablet may be called upon to give additional information about the show. Xbox SmartGlass aims to automate and streamline this activity. The Xbox 360 or a Windows 8 PC handles the TV aspect, but any smartphone or tablet can handle the tablet side (presumably with a device-specific app). Among the examples given on how best to tie smart devices and TVs together was a second season ‘Game of Thrones’ episode.

While watching Daenerys on screen, the nearby tablet tracked the events on a map of Westeros, giving scene-specific geographic information. In another example, a show was paused on a tablet and immediately resumed on a 360, which illustrated a global resume feature for all included media.

Amusingly, a moment later, Matt Stone and Trey Parker introduced their new ‘South Park’ game called ‘The Stick of Truth’ and mocked the need to tie your phone to your tablet and tablet to your console, etc. 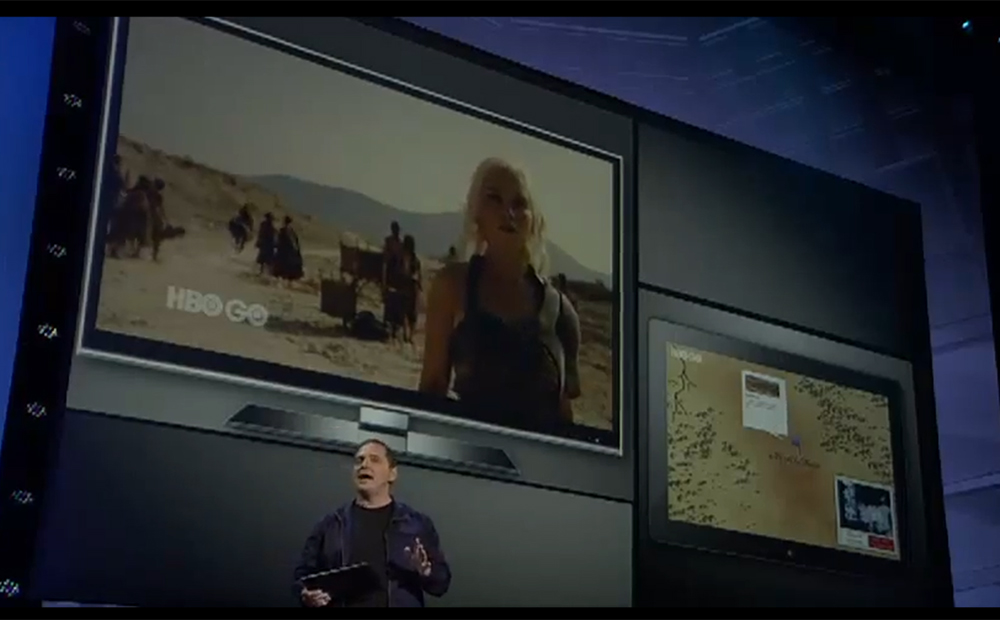 The Growing Uses of Kinect

Kinect was a big focus of the press conference. Most titles that were showcased involved some aspect of Kinect. Both ‘FIFA’ and ‘Madden’ featured Kinect play-calling. (‘FIFA’ even used the player’s audible frustration to affect the in-game announcer’s dialogue and player character’s visible emotion.) A Kinect magic-centric title that ties into the ‘Fable’ franchise, called ‘Fable: The Journey’, was introduced. Bing Kinect search was used constantly to navigate the ever controller-defiant 360 interface. Nike was on hand to introduce ‘Nike Plus Kinect Training’ (which comes across as a hardcore take on ‘Wii Fit’) and ‘Nike Fuel’, a globally applicable athlete measurement index. The footage shown of Nike’s facilities couldn’t help but bring to mind early scenes from Michael Bay’s ‘The Island’ or Ivan Drago’s training from ‘Rocky IV’.

Internet Explorer for the 360

All the talk of using tablets and smartphone touch screens, as well as Kinect voice navigation, made for a smooth transition into the introduction of a web browser for the 360. Microsoft stated that these two important interfaces are needed to make a console browser that isn’t painful to use. Using a touch screen to swipe, scroll and pinch-zoom makes great sense, but Internet Explorer’s credibility as a browser of choice, plus an overall disinterest in console browsers, really lessened the impact of the feature’s announcement.

The takeaway for the game line-up as a whole is that it’s firmly planted in this generation. Nearly every title was a sequel to a big current-generation franchise. These included the familiar looking ‘Halo 4’, ‘Gears of War: Judgement’, ‘Resident Evil 6’, ‘Black Ops II’ and ‘Dance Central II’, just to name a few.

All of those titles gave impressions that they’d continue their franchises’ success. ‘Halo 4’ is notable due to its new development house, 343.

Crystal Dynamics’ ‘Tomb Raider’ looks great, with smooth animations and sensible destructible cover. Lara Croft looks very much like Katniss from ‘The Hunger Games’ as she runs around the jungle with a bow. The first game shown was ‘Tom Clancy’s Splinter Cell: Blacklist’, which takes Sam Fisher to the Iran/Iraq border, complete with a host of UAV and other spec ops tactical support.

‘matter’ was pitched as being under the direction of Gore Verbinski, and the trailer was actually very cool, almost like ‘Tron’ meets ‘Portal’. I don’t know what to make of ‘Forza Horizon’, but it’s nice to see some more detail in the environments and some nighttime lighting in a ‘Forza’ branded game. The ‘South Park’ game, ‘Stick of Truth’, is being developed by Obsidian, recently of ‘Fallout: New Vegas’ fame. Based on some of the things that Matt and Trey talked about, it’s clear that this game will be a must for the hardcore ‘South Park’ fan.