After so many sorority house massacres, maybe you’re thinking it’s long past time for something like Haunting on Fraternity Row to help even the Greek playing field. Sure, there are a whole bunch of dead sorority girls here too, but eh, it’s still a start.

I get it if you reflexively brace yourself for the worst. Yup, Haunting on Fraternity Row is indeed a Found-Footage horror flick. And yes, it opens with police responding to numerous 911 calls about casualties at the Sigma Tau house, before flashing “Sixteen Hours Earlier” – as hacky a beginning as they come. Stick with it, though, and Haunting on Fraternity Row actually winds up being pretty decent. 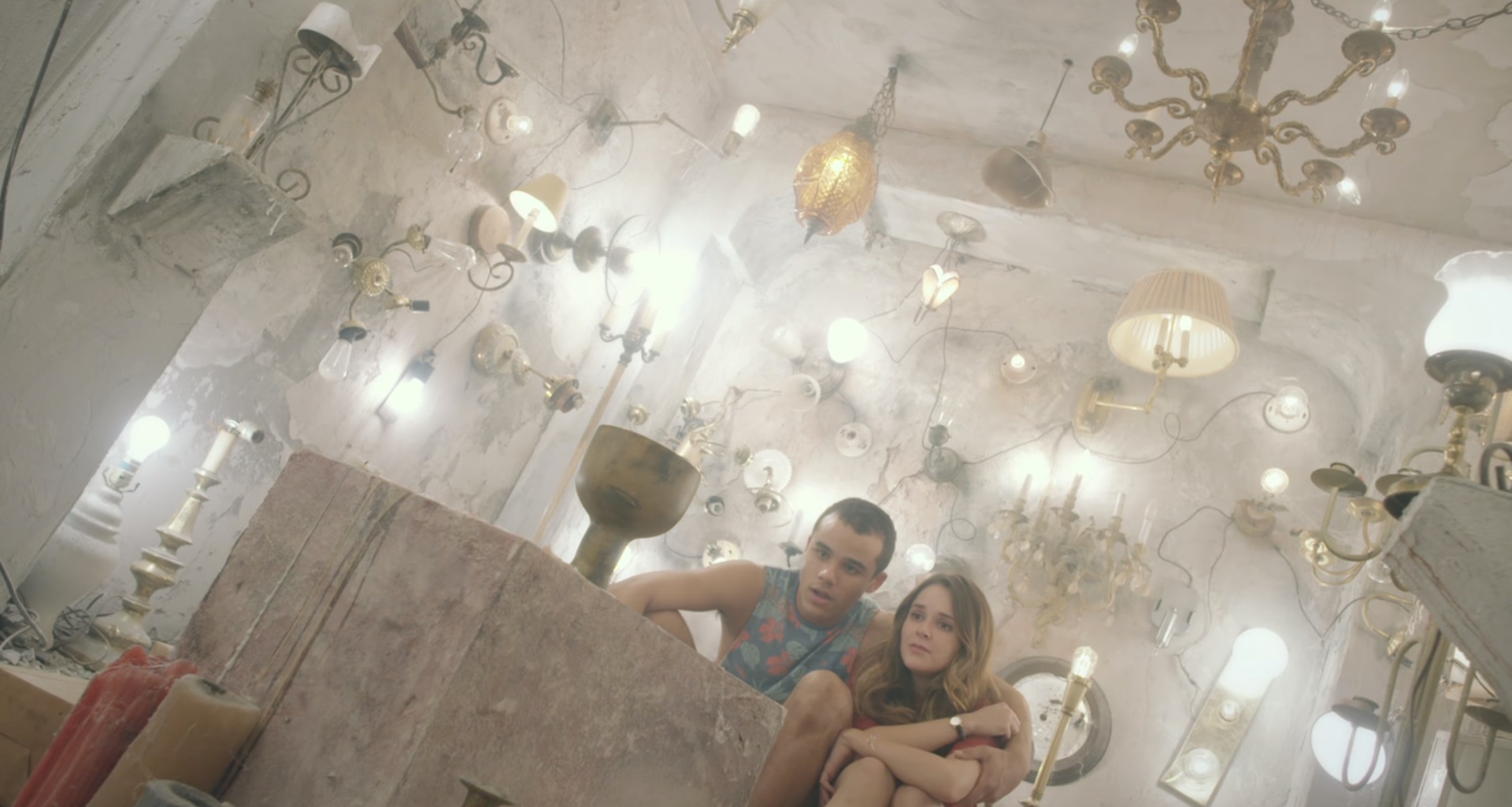 Okay, so a rogue keg uncovered a spooky tunnel leading to a hidden chamber in the frat house basement. Who cares, bro? Tonight’s the Sigma Tau luau. We’ve got a suckling pig, enough booze to fill an Olympic-size swimming pool, a mountain of lowercase-“c” coke, and half the sororities on campus in various states of undress. ‘Sgonna be epic! Oh, and I checked it twice, bro, and I don’t see any demons on the guest list.

Alas, this frat house happens to be where a cult leader slaughtered a dozen of his followers way back in the ’60s. And that weathered old chalice that Tanner (Jayson Blair) is swigging margaritas or whatever from? That for decades served as a prison for an unspeakably nightmarish demonic entity. I’d tell you what happens from there, but I mean, the movie’s called Haunting on Fraternity Row. Nothing good, man. Nothing good. 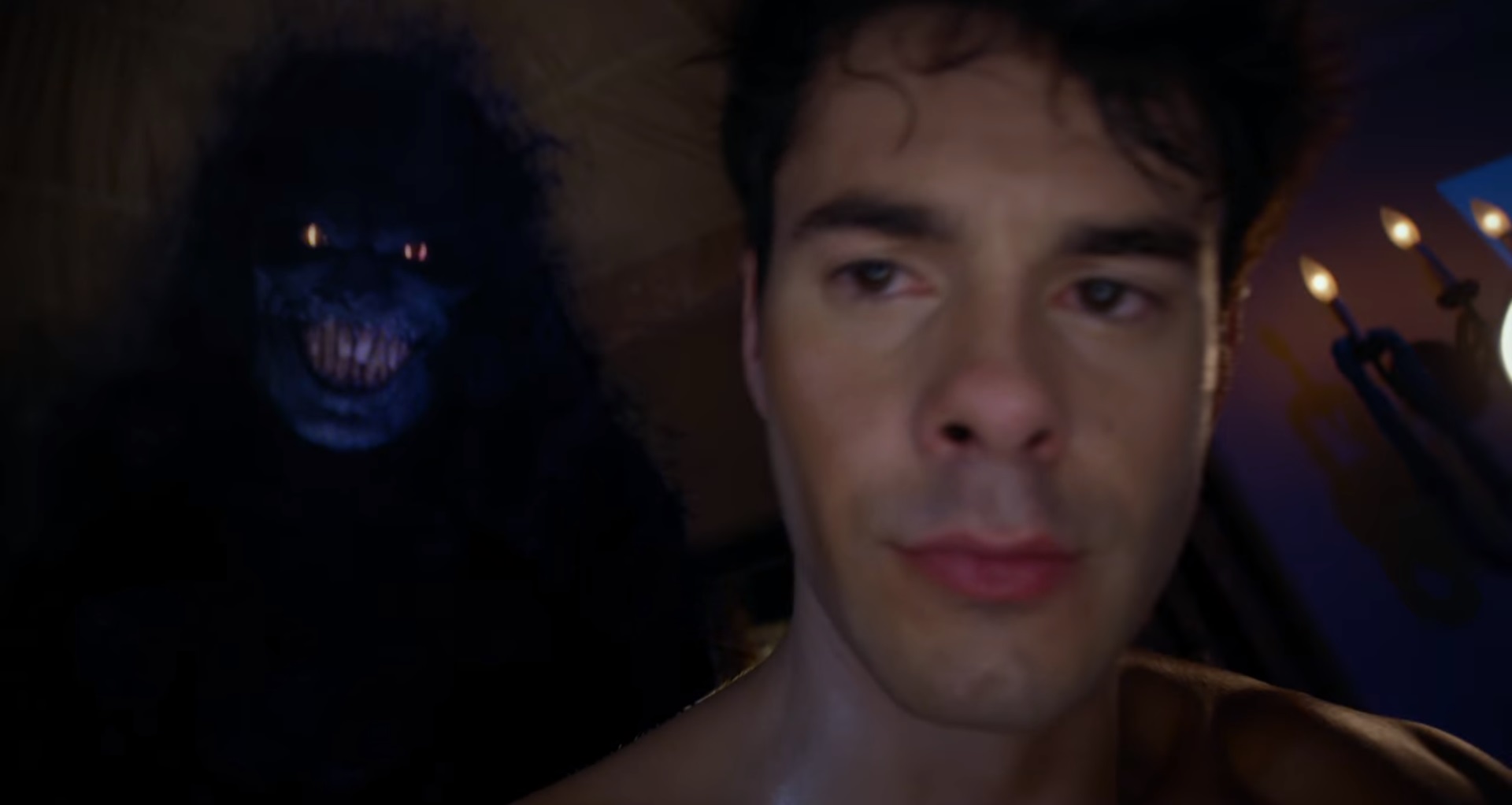 Admittedly, an awful lot of the scares are routine, and Haunting on Fraternity Row tends to breeze along at a fairly relaxed pace. It’s twelve minutes until the obligatory ghostly slammed door. The movie’s half over before anything balls-out supernatural unfolds, and it’s not until the final half hour that you definitively see a corpse. The smoky demonic entity isn’t particularly menacing, and most of the body count is owed to copy-and-paste eye gougings.

Though it’s somewhat of a wait for all hell to break loose, Haunting on Fraternity Row has plenty more to offer than jump scares. The best thing about the movie, honestly, is the legion of frat boys and sorority girls. Rather than a gaggle of interchangeable dude-bros, all of the key players have distinct and surprisingly rich personalities. 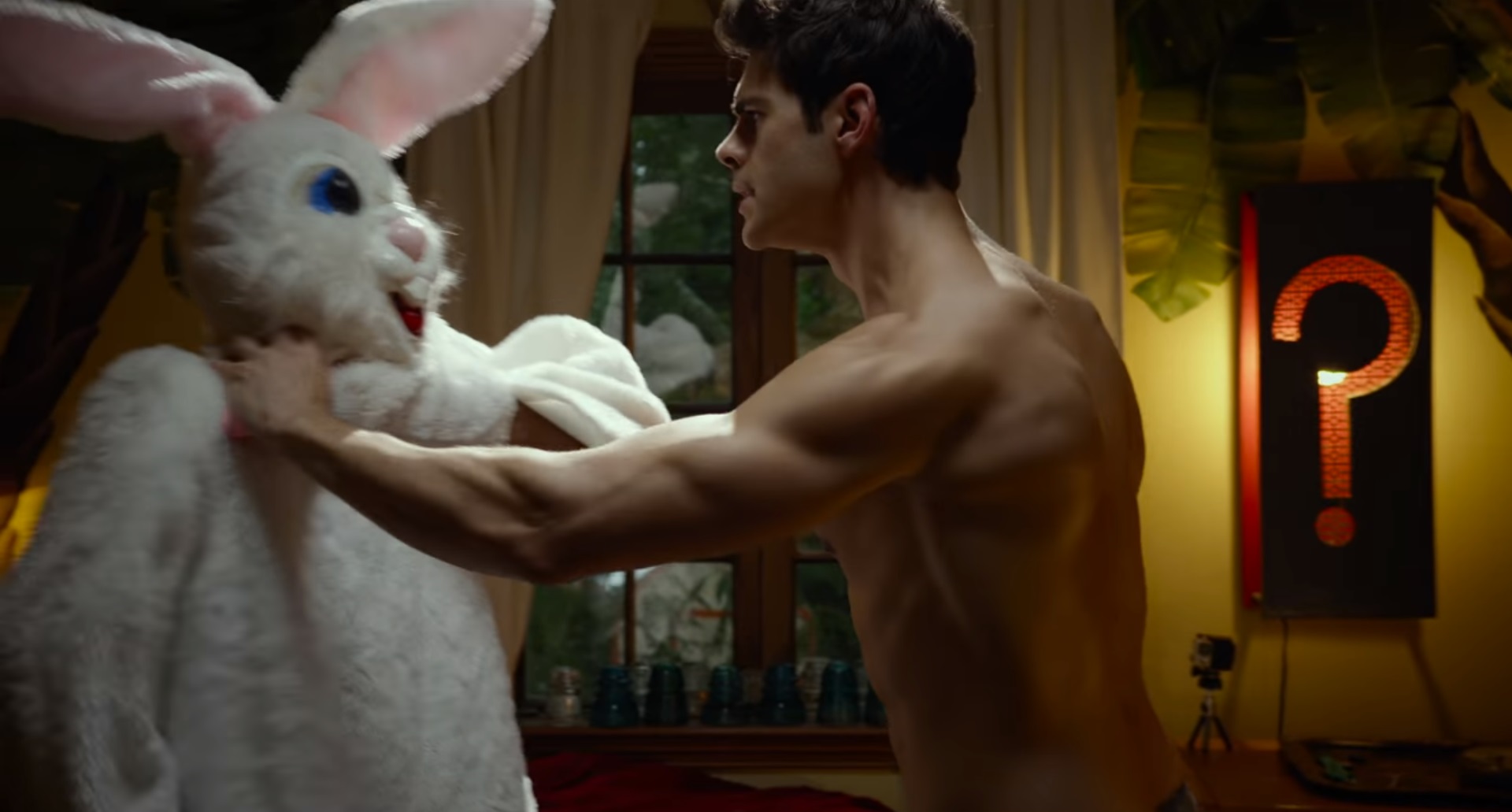 There are a slew of subplots to paint them with color, whether it’s an undeservedly overconfident jackass aiming to marry into a hedge fund, the agonizing wait to find out if one of his brothers has been accepted into med school, struggling too mightily with shyness to talk to a longtime crush, dealing with a freakishly strong degenerate of a 16-year-old brother, a stoner conspiracy theorist obsessively investigating the frat house’s dark history, or, sure, erectile dysfunction.

These Greek brothers and sisters are brought to life by an outstanding cast. Pretty much everyone throughout Haunting on Fraternity Row has a list of high-profile credits a mile long, and their experience and talent are immediately evident. Thanks to them, these characters are at worst love-to-hate-’em raging pricks. At best, I found myself genuinely invested in their individual arcs, particularly match-maker Maggie (Molly Tarlov) whose bubbly exterior masks a force to be reckoned with, the soulful and lovelorn Jason (Jacob Artist), and his crush Claire (Shanley Caswell), who’s still reeling from a devastating loss from years past. 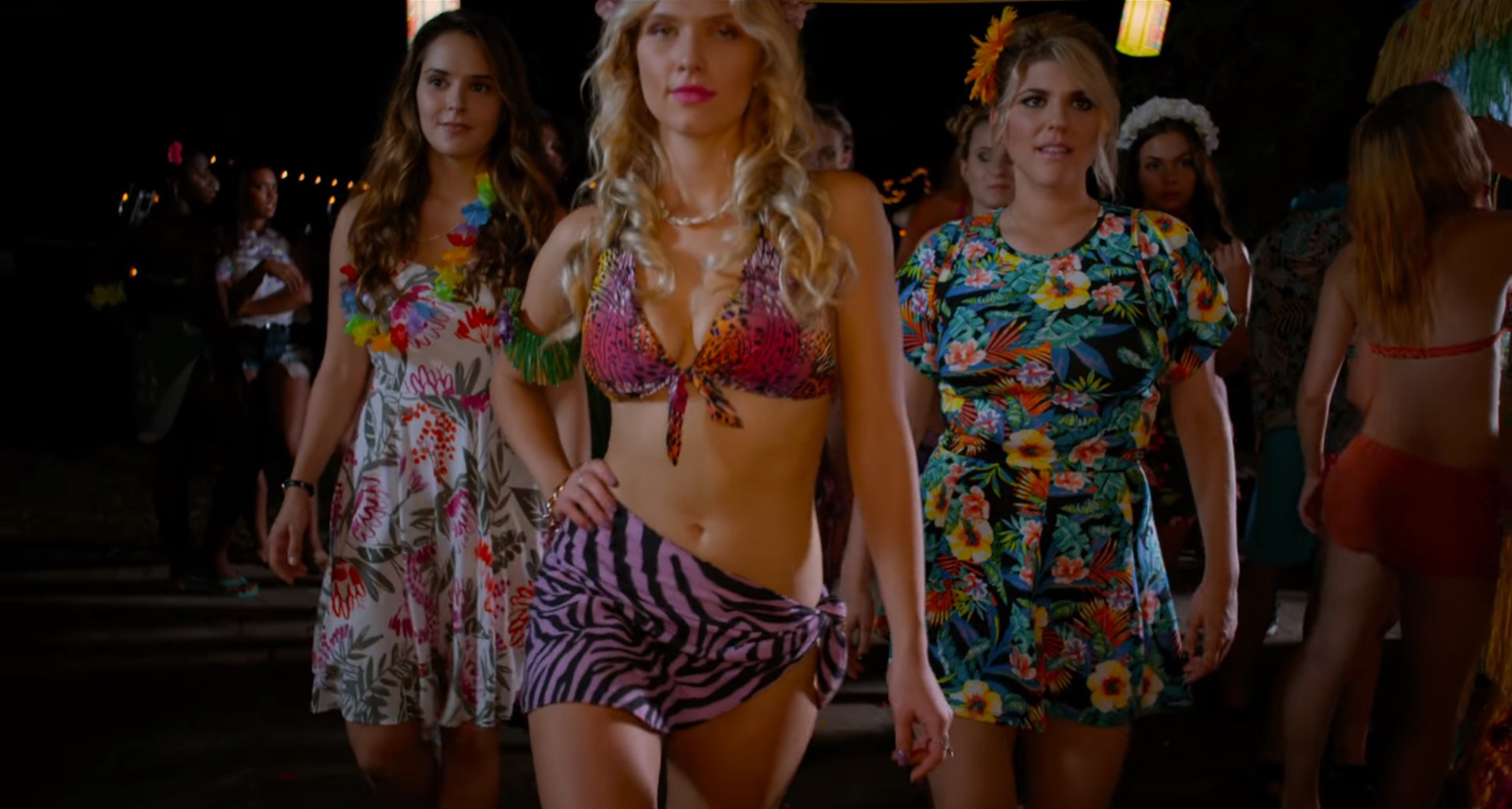 While I wouldn’t say that the movie’s scary, its jolts land well enough. I mean, they aren’t campy misfires that are accidentally hysterical. The whole thing is atmospheric enough to set an appropriately uneasy mood, and this is balanced well with the flick’s remarkably effective comedic streak. I’ll confess to jumping a couple of times, and some of the well-earned twists and turns near the end genuinely caught me off-guard. 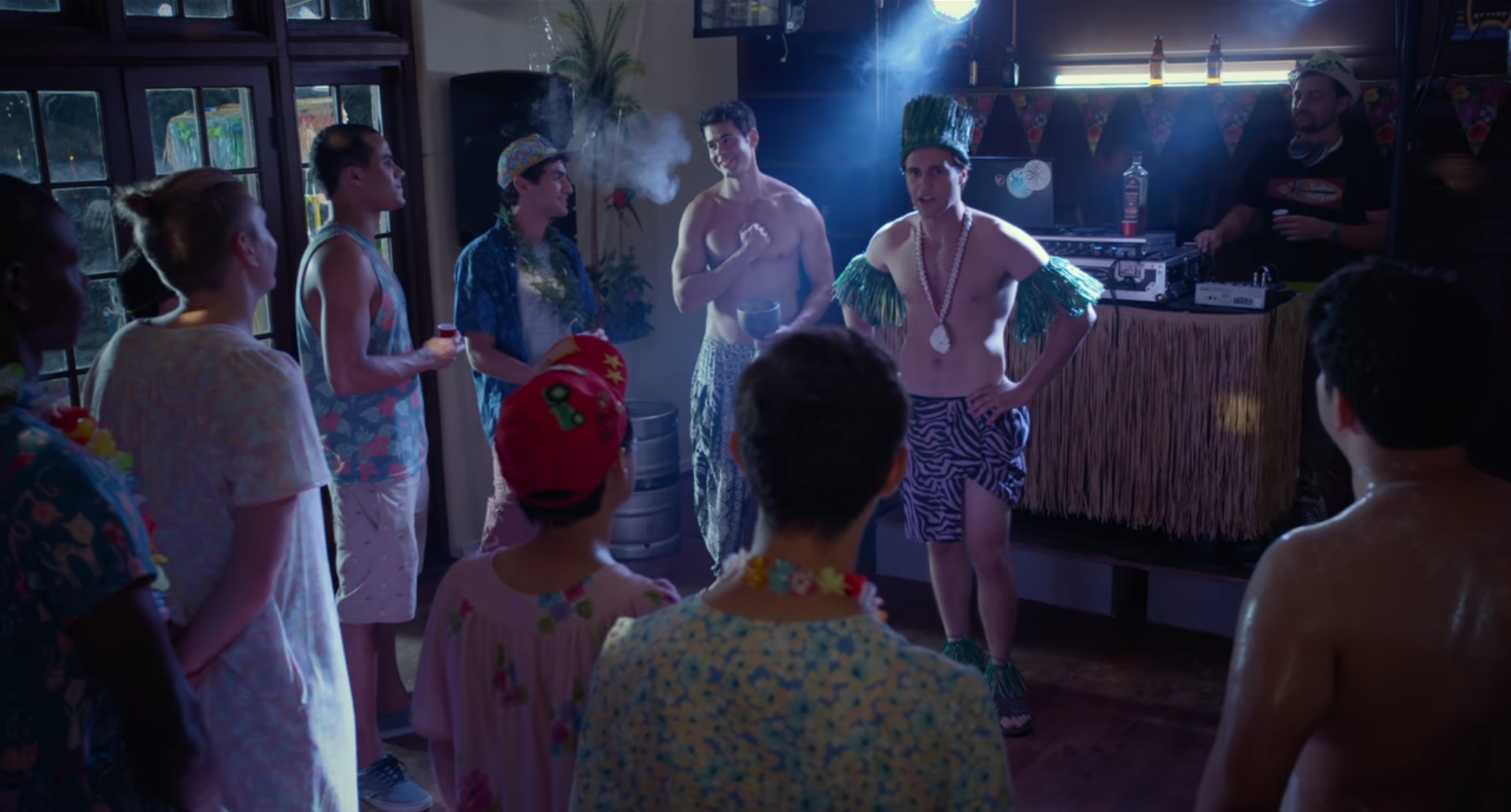 Even though Haunting on Fraternity Row is fairly unremarkable as a horror flick, it successfully juggles enough other genres – romance, drama, and comedy among them – that I walk away with a sincere appreciation for what director/co-writer Brant Sersen and his terrific cast have delivered. Apologies to anyone hoping for a snarky, savage takedown, but I dug it.

Haunting on Fraternity Row hasn’t gotten any sort of physical home video release anywhere the world over as I write this, but it’s waiting for you on Netflix right now.