Nicolas Roeg’s 1976 The Man Who Fell to Earth is a seminal work of cult science fiction cinema. Decidedly more art film than special effects or action showcase, the movie invites and practically requires multiple viewings to decipher its many mysteries. A new analysis from critic Samuel J. Umland traces the project’s journey from source novel to screen.

The Man Who Fell to Earth started out as a novel by author Walter Tevis (The Hustler), first published in 1963. The book is a fairly straightforward science fiction tale of a space alien who arrives on Earth on a mission to collect water for his dying planet, disguises himself as a human, and integrates into modern society. Perhaps the most interesting aspect of the book is its point-of-view. The entire story is told from the perspective of a highly intelligent and logical being trying to navigate a chaotic new world that often doesn’t make much sense to him. Even everyday things that seem perfectly normal to the reader will fill the character with either amazement or trepidation.

At first glance, Roeg’s film adaptation may not seem to resemble the novel much at all. The director cut out all of the character’s internal monologue and tells the story more through images than through dialogue or plot. The narrative lurches both forward and backward through time in confusing jumps, and the visual language of the film is loaded with heavy symbolism. It feels very much of a piece with Roeg’s other movies, including Performance and Don’t Look Now, which can easily lead to the conclusion that it’s an auteurist work using its source only as an inspiration and a jumping-off point. In many ways, that’s exactly how the film came about, and Roeg has admitted over the years that he was never much concerned about being faithful to the text.

I approached The Man Who Fell to Earth as a movie first and only read the original novel much later, in the form of a paperback copy that came packaged with the 2005 Criterion Collection DVD edition. (Sadly, the Blu-ray did not carry that over.) In fact, that book sat unread on my shelf for a number of years, until I finally pulled it out to read in preparation for reviewing the 2017 Blu-ray edition from Studio Canal. What I found most surprising is that the movie actually stays surprisingly true to the plot of the novel, even in story points (such as the main character recording a music album near the end) that I had assumed were written to tailor the script for star David Bowie. It turns out that comes straight from the book.

Published in May of this year by Arrow Books, the print imprint of video distributor Arrow Films, The Man Who Fell to Earth: Novel to Film is a slim text of just 101 pages, a good number of which are filled with publicity stills and behind-the-scenes photos from the movie. The paperback also has a small form factor of about the same dimensions as a Blu-ray case. Author Samuel J. Umland is a film professor and former longtime contributor to Video Watchdog magazine, and has previously written books about Philip K. Dick and Tim Burton. He organizes this one logically and concisely into sections covering the novel, author Walter Tevis’ personal life and career, the movie’s development and production, the film’s initial mixed reception from critics and audiences, and its later evolution into a cult classic.

Umland has a very academic writing style with a fondness for including lengthy footnotes printed in near-microscopic text at the bottom of many pages. In a lot of ways, his book reads more like a research paper than the typical sort of glossy making-of tome you might find on the Music, Film & Performing Arts shelf at a Barnes & Noble. I say this not as a criticism, but rather to set an expectation for what you’ll read in it. Umland is more interested in documenting and analyzing both the novel and the film than in promoting or cheerleading for them. His text may be a little dry, but it’s also mostly interesting and well-written. With such a short page count, it’s also a very quick read that hardly gives you any opportunity to get bored with it. (I found it pretty refreshing after the exasperatingly long and back-breakingly heavy David Lynch biography I’d just finished beforehand.)

Unfortunately, even as well-researched as the book may be, I didn’t find it to contain any significant revelations about either the novel or the film. For as much time as he spends describing both individually, Umland also doesn’t draw many direct comparisons between the two versions of the story, which I’d think useful. The book feels like it might have begun life as an essay about the movie that grew a little too long to be contained in, for example, a booklet packaged with a Blu-ray reissue.

Fans of the movie will undoubtedly consider The Man Who Fell to Earth: Novel to Film worth reading once they start it, but the book doesn’t really feel substantial enough to justify the high $29.95 MSRP. I was fortunate enough to pick it up for $11.99 during a recent Arrow sale at DiabolikDVD. That’s much more reasonable pricing for the content, if the deal ever comes up again.

[Note: The Walter Tevis novel is also still in print and readily available.] 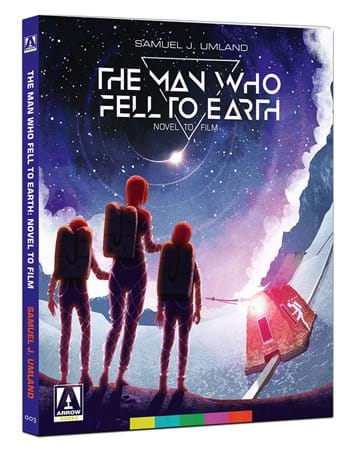 The Man Who Fell to Earth: Novel to Film – Buy at Amazon