‘Lost’ fans, you may think that you’re obsessive about learning everything there is to learn about your favorite show. You’ve studied every clue and invented convoluted explanations for all those mysteries left unexplained in the finale. Even so, I doubt that you’re half as obsessive as one Jonah Adkins, who’s used his experience as a professional cartographer to create some incredible maps of the ‘Lost’ island.

Because the geography of the island was never explicitly defined in the series, Adkins had to extrapolate a lot of details based on episode dialogue. When characters talked about which direction they were going or how long it took to get somewhere, he plotted out their actions as best he could, while trying to compensate for contradictory details. In an interview with ‘Entertainment Weekly’, he states, “Sometimes it would take a group of people to get from point A to point B minutes on the show one time, then days the next time. Sometimes the camera shots would depict the water on different sides of a feature in the same scene.”

The result of his all his hard work provides an intriguing look at just where everything on the island was supposed to be. You can click on the below image for a larger view. For the full-resolution version, be sure to visit Adkins’ web site. 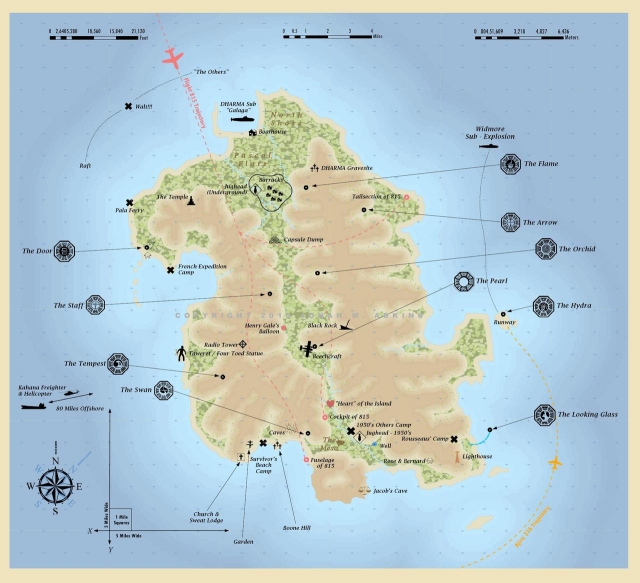 He also has several intermediary versions of the map on display, and a separate world map based on the ‘Lost Experience’ interactive game.

Yes, he sells printed copies too. They’d make an excellent gift for the Lostie in your life.