We’re going crazy with contests here at The Bonus View lately. It’s almost as if we appreciate our readers and want to give back to them or something. This week, we’re offering up all three of the standalone ‘Lord of the Rings’ Blu-ray releases and some other assorted swag. I think you’ll find this contest to be a lot of fun. Follow after the break for the rules on how to win.

Previously only available on Blu-ray in a trilogy box set, each of the three ‘Lord of the Rings’ movies will be released as separate standalone Blu-ray discs tomorrow, September 14th. To mark the occasion, The Bonus View (in conjunction with Warner Home Video) will be giving away a prize pack that includes the following: 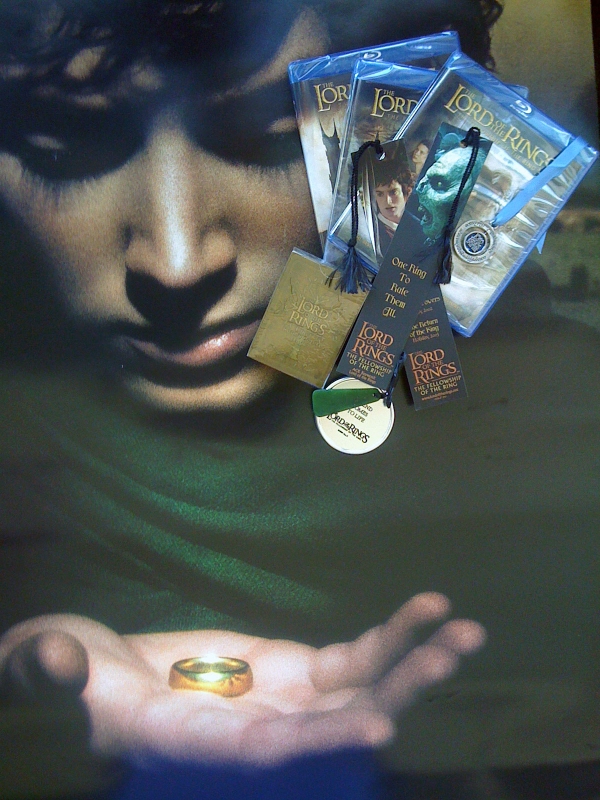 If you’ve been living in a Hobbit hole for the past decade, see the official ‘Lord of the Rings‘ web site for more information on the movies.

I will freely admit that I steal most of my contest ideas from the Topless Robot blog, which has held two hilarious Twitter-themed contests in the past: Tweets from the Death Star and Tweets from G.I. Joe Headquarters. I figured this would be a good time to put our own spin on this. Thus we have:

What does that mean? Imagine that Frodo, Samwise, and all the other characters from the ‘Rings’ stories had cell phones or laptops, internet access, and the mentality of your average 13-year-old. What would they tweet to one another?

Each participant will be allowed five tweets. These can be five individual tweets, or tweets that respond to one another in a conversation. In either case, there’s a limit of five. All tweets should follow the standard Twitter formatting of no more than 140 characters, including spaces.

Unfortunately, we only have one prize pack to give away, so there can only be one winner and no Runners Up.

Limit of five tweets per person. Winners will be chosen at our subjective discretion based on whatever we happen to find the most clever or funniest.

This contest is only open to entrants from the domestic United States. We will not ship internationally (whether you’re a U.S. citizen or not). Employees of High-Def Digest or Internet Brands and their families are not eligible. Standard contest rules and conditions apply. Winners of our previous contests are also not eligible to win, but may get Honorable Mentions.

The deadline for entry is this Friday, September 17th. The winner will be announced next week. Good luck to everyone who enters.