Once upon a time, before Blu-ray, before even DVD, Laserdisc ruled the home theater world. I was first introduced to Laserdisc in my college days, and immediately recognized its advantages over crapvision VHS, which was the only alternative at the time to watch movies outside of a theater. I became a big-time LD collector, and built a web site about the format that I haven’t updated in ages. Eventually, as DVD took over and LD died off, I stopped actively collecting the 12″ discs. Honestly, now that we’re in the high definition era, it’s kind of painful to watch an analog, non-anamorphic LD on a large high-def screen. I can’t remember the last time I watched a movie all the way through on the format.

The last time I bought a Laserdisc was four years ago. Even that came after a gap of a couple years without any LD purchases. And yet, recently I found myself buying a particular rarity that I’ve often coveted, a Japanese import Laserdisc edition of the Peter Greenaway film ‘Prospero’s Books’.

Peter Greenaway is a director who has long suffered from a malady I call Bad Video Karma. Although he makes intensely visual, achingly beautiful movies, his filmography is very poorly represented on home video. Many of his films, including even recent productions, have never been released on DVD. Of those that have seen release, far too many have been cropped, censored, and/or badly transferred.

‘Prospero’s Books’ from 1991 is a loose adaptation of Shakespeare’s play ‘The Tempest’, as visualized through a fusion of film, theater, opera, painting, literature, and dance. John Gielgud stars as Prospero, and also reads all dialogue for every one of the story’s dozens of other characters. That’s a conceit that can be disorienting. This was the first movie to integrate high definition video into its production (via a Japanese analog HD video format called Hi-Vision, which was used to shoot many of the picture-in-picture segments). It also has nudity. A lot of nudity.

Greenaway’s films are difficult to describe and sometimes overwhelming to watch, but utterly unique and (at their best) truly transfixing. ‘Prospero’ was released not long after the director’s controversial ‘The Cook, The Thief, His Wife & Her Lover’ had caused a sensation on the art house scene. Despite this notoriety and respectable notices from critics, the film didn’t catch on with American audiences. It has never been released on DVD here, or even in the director’s native England. The only VHS and Laserdisc editions released in English-speaking territories were panned & scanned. That’s a genuine travesty, considering Greenaway’s lavish visuals and precise sense of composition.

To my knowledge, the only widescreen DVD edition was released in Spain as part of a rare limited edition (and very expensive) Peter Greenaway box set that is long out of print and basically impossible to find.

Over the years, I’ve kept my eye on a letterboxed Laserdisc released in Japan. I’ve had many previous opportunities to buy a copy, but always let it go by. Partly, this was due to price. It’s a fairly rare disc, and often sells for over $100. That’s a lot for a single Laserdisc. As if that weren’t enough reason to pause, two other factors really made me hesitate.

First, it has Japanese subtitles burned into the picture. I’ve owned many Japanese Laserdiscs over the years, and learned to tune out burned-in subtitles a long time ago. However, the lack of this problem on DVD or Blu-ray (where subtitles can be turned off) made me twinge a little at the thought of dealing with this issue again. Also, anything that obscures Greenaway’s densely-packed visuals is frankly a crime.

Even more importantly, all Japanese video releases of this movie are censored to optically blur out genital nudity. As I mentioned earlier, this film has a considerable amount of full-frontal nudity, both male and female. I own a Japanese LD of Greenaway’s later ‘The Baby of Mâcon‘, and found the censorship there very sloppily applied and distracting. 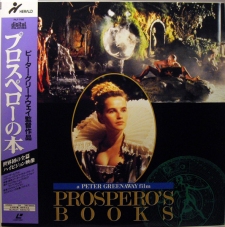 So, why did I buy the disc now? Mainly, because I received an email notice from the invaluable Jeff’s Used Movie Finder alerting me to an eBay auction with a low starting price of only $25. The description listed it in excellent condition. That’s a great price for a rare Japanese disc. I decided to put in a bid not much higher than the opening price, and let things play out as they may. If anyone were to outbid me, I wouldn’t fight it. Then it turned out that no one else bid, so I won the disc for only $25.

I received the disc recently, and indeed found it to be in excellent condition. The gatefold jacket is quite lovely, and still has the (frequently missing) obi strip. As a collectible item, I’m quite satisfied with the purchase.

As for the disc’s image quality, well, I didn’t have very high expectations to start. The picture is letterboxed to 1.60:1. It still looks a little cramped, but less so than other releases. I believe that the movie’s Original Aspect Ratio should be 1.66:1. This is not a case where 4:3 video transfers have been open-matte. They have all been cropped. The transfer is pretty soft and dull, even for a Laserdisc. Colors look faded. There’s a bit of print damage. The subtitles are large and distracting, and the censorship is annoyingly haphazard. Many genitals are blurred out, while others are completely unobscured. There’s little rhyme or reason to it.

I don’t regret the purchase at all, even though this is far from an ideal presentation for the movie. This film deserves a full-blown Criterion-quality restoration. I don’t foresee that coming any time in the near future, but I can continue to hope. In the meantime, I’ll have to make do with this flawed but interesting Laserdisc.