Fox is worried about ‘Knight and Day,’ the high-impact action comedy that’s opening across the country today. It’s been widely reported that the film, which stars Tom Cruise and Cameron Diaz, just isn’t connecting. In fact, in a recent awareness poll, more people know about (and have considered seeing) the similarly themed Ashton Kutcher/Katherine Heigl dud ‘Killers.’ In other words, that’s not a good sign.

Adding insult to injury is the incredibly limited window ‘Knight and Day’ has to make any kind of money. This weekend sees the release of the Adam Sandler/Chris Rock comedy ‘Grown Ups,’ which should appeal to anyone with a severe head injury and will probably end up making a ridiculous amount of money. Also, ‘Toy Story 3‘ will continue to make tons of cash. Next weekend, some little arthouse film called ‘Twilight: Eclipse’ opens. Yeah, things aren’t looking good for the former biggest movie star in the whole world. But you know what? The studio shouldn’t be that worried about ‘Knight and Day.’ Because it’s actually pretty good. For a while, at least.

In the film, Cruise plays a nutzo spy named Roy Miller who seduces and entangles a hapless mechanic (Diaz) that he runs into at a Wichita airport. Her character, June Havens, is on the way to Boston for her sister’s wedding. At the start, ‘Knight and Day’ is a snappy, knowing genre send-up. Cruise takes his oversized persona (which has ballooned further since his couch jumping incident a few years ago) and turns it on its side. We ask: is this guy genuinely crazy? He also seems to be gently ribbing his image as a guy who can make anyone feel like the most important person in the room. While in flight, Cruise dispatches a plane full of bad guys while Diaz is in the bathroom freshening up. When she finally emerges, Cruise flashes that million watt smile and says, “These things happen.”

Early scenes like this remind us why Cruise was such a huge star in the first place. His performance, perfectly calibrated between manic and madness, is electric. And Diaz, as the frayed woman caught in the middle between Cruise and a bevy of bad guys – both foreign (Jordi Molla) and domestic (Peter Sarsgaard) – hits the right mix of vulnerability and tomboy toughness. The plot kicks in shortly thereafter. It’s a whole bunch of nonsense about a tiny battery that’s able to supply whole cities with clean energy. But the central narrative is just an excuse, a skeletal awning used to hang a series of increasingly whirligig action sequences. 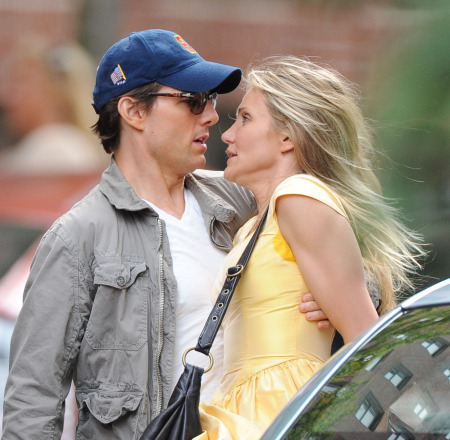 Which is where it seems ‘Knight and Day’ might be more clever than originally thought. There’s a running gag where Cruise drugs Diaz. Afterwards, we see hazy glimpses of what has happened to her while she’s drugged. One second she’s seeing Cruise hang upside down, the next she sees they’re riding in a runaway plane, etc. While this is very funny indeed, it also lets us into the head of director James Mangold, who may have been nominated for an Academy Award for ‘Walk the Line‘ but is most at home as a genre tinkerer (‘Copland,’ ‘Identity,’ ‘3:10 to Yuma‘). He seems to be suggesting that most action movies have only the loosest connection between action sequences, so why not just get rid of that connective tissue and make it all a joke?

And it works. For the most part. The problem with ‘Knight and Day’ is that the movie sort of loses its way about midway through. After all the players have been revealed (Paul Dano shows up as a mad scientist) and the stakes are established (err, that I’m more muddy on), things get a lot more conventional. Cruise, so alive earlier in the movie, takes on a drab layer of self-seriousness. Diaz has little to do but walk around aimlessly and wait to get drugged again. The plot becomes more contrived, and unnecessarily complicated, which is what you tend to expect from a movie with nine writers (among them genuine talent like Scott Frank and Ted Griffin) that suffered through massive reshoots. The movie kind of limps to its conclusion, free of the verve and pop that made the first half so refreshing and fun.

Still, in terms of mostly mindless summer trifles, you could do a whole lot worse. There seems to be some level of intelligence at work here, even if it’s been cobbled together like a hive mind from various focus-grouped points of view. It’s a very pretty movie, with a half dozen glamorous international locations. The score by John Powell has a lot of flair. I also don’t think Fox should be all that worried about its box office prospects. It’s not going to set the domestic box office on fire, that’s for sure, but it will make a healthy earning, mostly from strong word of mouth. (The audience I saw it with had a ball.) It’ll probably put up a good fight internationally. Hopefully it has a better title than ‘Knight and Day’ overseas, though. Nine writers, countless producers, an infinite number of marketing people – and that’s what they came up with?