NBC’s Thursday night comedies didn’t disappoint.  ’30 Rock’ was in rare form, ‘Community’ was strong, and ‘Parks and Recreation’ was solid.  As for ‘The Office,’ well, they can’t all be winners.

Community ‘The Art of Discourse’

Abed and Troy take on a junior college bucket list, Jeff and Britta match wits with high school students and Peirce and Shirley leave the group for a while.  It was a little overindulgent in parts, sure, but ‘The Art of Discourse’ was easily one of the better episodes in the first season. Peirce really hit his stride in this episode.  It’s incredibly easy to write him as a clown, but giving him a bit of conviction was a great way to strengthen the character while keeping the laughs coming.  He’s bigoted, sure, but he’s not trying to be mean.  The roundtable of unintentional bigotry at the beginning of the episode may be his funniest moment in the show so far.

The junior college bucket list started out strong, with Abed smashing a guitar ‘Animal House’ style and moving on from there.  It didn’t have the best follow through, but it did create a reason for the great song at the end that included the lyrics, “I hate science unless it helps me build a robot.”

Jeff and Britta fighting with the high school kids started out really funny, but escalated into a pretty childish “duh” war towards the end.  I love that they took a page from the ‘Always Sunny’ playbook of revenge by sleeping with someone’s mother.

‘Parks and Recreation’ had some really amazing moments this week.  While Leslie’s quest to prevent the destruction of a historic gazebo wasn’t too thrilling, the segments with Andy, April and Ann taking on meetings for Ron were brilliant. 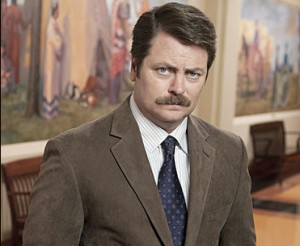 April and Ron are great together in the show.  They’ve both got the same “I don’t care about anything” vibe, and they’ve each got their own emotional weak points.  ’94 Meetings’ really allowed us to see the range of each of these characters.

When Andy and Ann get roped into taking meetings for Ron, it makes for some great comedy.  Andy immediately caving to any good cause, but still trying to avoid saying yes was clever.  The instant “does this look weird to you?” that came after Ann revealed that she was a nurse  – a trend that continued throughout the episode – was a gag that really worked

The story featuring Leslie and the gazebo was somewhat uneventful, but good for a few laughs at least.  Tom’s minute long cologne bath and the absolutely disturbing painting hung in the mansion were highlights.

The end, with April’s oh so sweet family and horrible nickname was a nice revelation.  Pairing up April and Ron is the smartest thing the show’s ever done.

Let’s start with the good.  Dwight trying to get Kelly into a minority executive training program was great.  His attempts to be the puppet master always are.  It quickly backfired of course, in the way that such plans always do.

Gabe’s inclusion still feels tacked on.  He’s like Toby, but without all the funny.  He served his purpose in the episode, playing the straight man to the others, but One of the best moments in the episode was when Dwight was pitching the minority executive training program to Stanley and Oscar.  Erin, in the background, observing and commenting on the proceedings was a great touch.

There were some really funny moments in the episode, but Michael Scott is just getting tough to watch.  He used to be a lovable loser, but it’s really getting out of hand.  It’s past not understanding social etiquette at this point.

Who would actually try and kiss a woman he’s only met once before, and in a business meeting no less?  Who would, after getting turned down on the kiss, proceed to take a breath mint from her hand with his mouth?  I found myself getting angry at Pam for egging him on too.  One of the many voices of reason should really have suggested asking her out before trying to make out with her in an office setting.

It wouldn’t have been so bad if the episode had ended with Michael failing.  A woman came into his life, used him for a discount on some printers, and then just as suddenly left.  But for some reason he succeeded.  His lack of social graces apparently won her over, apparently.

It’s the will reading of Don Geiss and Jack is hoping for something to remember his former mentor by.  He’s given a peacock, which he treasures as his one connection left to the man who meant so much to him. 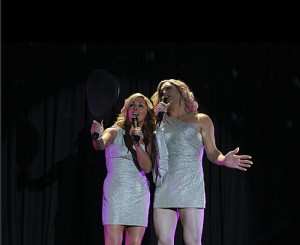 It was a sweet storyline, and it afforded an opportunity to watch Kathy Geiss pull a pocket watch out of her mouth.  There’s something that just works about Alec Baldwin giving a bird a glass of scotch.  Liz screaming “Living dinosaur!” upon seeing the peacock was pretty wonderful too.

Meanwhile, Dot Com and Tracy are competing to see who should be Grizz’s best man.  Not to keep the honor for themselves, but rather to spare each other’s feelings.  It’s another sweet story – it was a somewhat sappy episode, come to think of it.

I’ve got a weakness for Will Forte that goes back to ‘Clone High,’ the cartoon that nobody else seemed to watch.  He’s made me laugh in almost everything he’s been in since, and ‘Argus,’ was no exception.

Forte plays Jenna’s boyfriend, who apparently makes a living as a Jenna Maroney impersonator.  It was a strange sight to see, but, from the right angle, he kind of passed.  Forte played the part with gusto, and his impression was hilarious.

Seeing the two sing at the end, while both wearing the same outfit, was strange and wonderful, and – when they made out – a little disturbing.