Anybody got a light? How about some flame-retardant underwear? Nicolas Cage is back and he’ll still be drivin’ angry when ‘Ghost Rider: Spirit of Vengeance’ rolls onto Blu-ray 3D in a SteelBook case next month at Future Shop Canada.

This sequel based on the Marvel Comics’ character will arrive on home video on June 12th.

‘Spirit of Vengeance‘ finds former motorcycle stuntman Johnny Blaze (Cage) in Eastern Europe, where he must call forth his demonic alter ego to save a young boy from the Devil (Ciaran Hinds).

Here’s an image of the SteelBook front cover art. (Click to enlarge.) 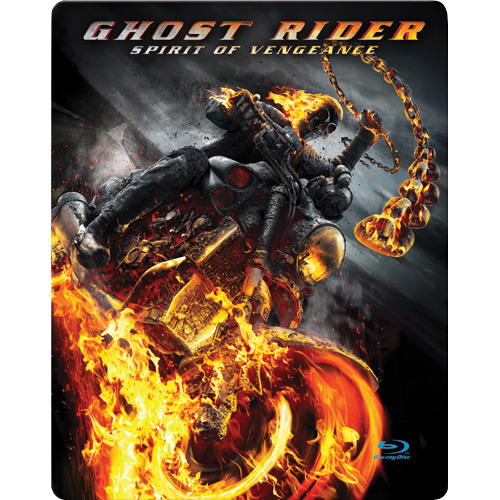 The design of this one looks pretty slick, and I definitely like that it also includes the Blu-ray 3D. Even though I heard the movie itself isn’t the greatest, I might have to blind buy this one. Hey, it’s Nicolas Cage, and it can’t be worse than the first film… Can it?

The pre-order price for this SteelBook is currently $36.99 CAD. Also note that Future Shop will not ship to the United States.