If you’ve got ‘Epic Mickey’ on your Christmas list, you may want to do a little bit of reading first. Start with this review.

I was excited about the launch of ‘Epic Mickey’ since it was first announced. It’s a combination between the movie studio responsible for some of my all-time favorite films and the man behind ‘Deus Ex’, which is still one of the most impressive games I’ve had the pleasure to play. 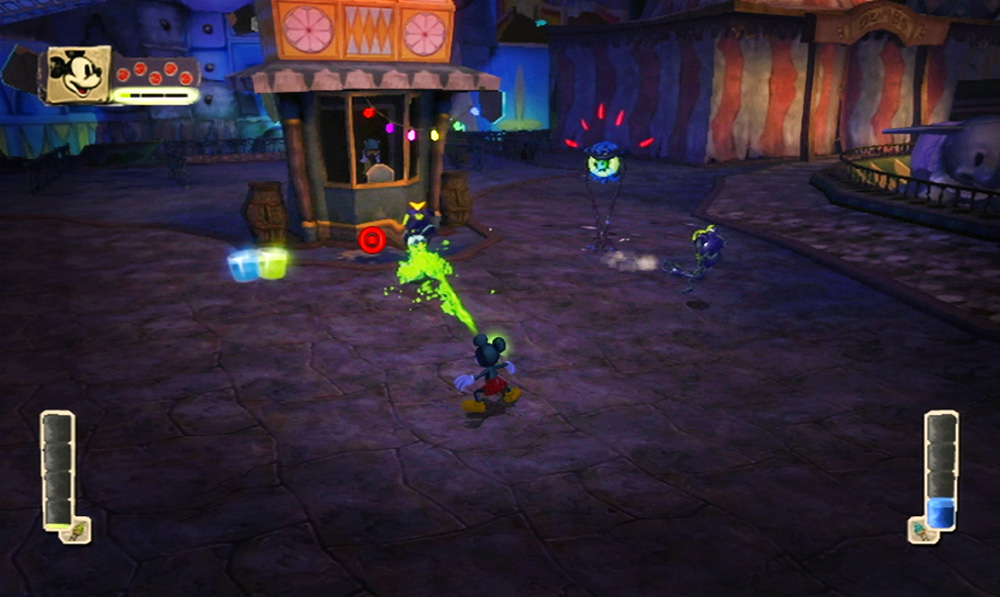 ‘Epic Mickey’ starts out with a nice animation that takes pieces from a few different Mickey cartoons and combines them into one. It tells the basic story, which is that Mickey accidentally destroys a world by spilling some paint thinner. Yes, that’s our hero.

Mickey gets sucked into this world, a place set aside for forgotten cartoon characters, and must quest through untold dangers to get back home.

The first problem comes right at the concept. Setting the stage in a world full of forgotten Disney characters just seems like a flawed premise. I’m a pretty big Disney fan, but there are some here that I don’t recognize at all, and most of the characters in the game don’t mean anything to me. If interacting with ‘Clarabelle Cow’ or ‘Horace Horsecollar’ is a big deal for you, then you’re the audience this game is searching for.

It would be significantly better if any of the characters had voices, but they don’t. This just seems like a missed opportunity, especially for characters with a larger role to play. Adding some voices to the cut-scenes would have made for a much better experience. In fact, “missed opportunities” seems to be the name of the game for ‘Epic Mickey’, because they’re abundant.

In the first stage, you’re tasked with finding some folks that are trapped, after which you must defeat a boss. Pretty standard stuff. What makes it interesting is that you’re trekking though the “It’s a Small World” ride, going from country to country defeating foes and rebuilding structures. Throughout the level, there isn’t even a hint of the music that made the ride famous, though the boss fight does include a touch of the theme. The soundtrack could have been so much more than it is.

That wouldn’t have mattered at all if, when I finished the level, I had restored the ride to its past glory. It would have been such a great reward to ride the normal ride after I fixed it, but there’s nothing of that sort.

The same goes, sadly, for the rest of the attractions featured in the game. I was ecstatic when I reached The Carousel of Progress, which my parents and I once got stuck on one part of for an hour straight. (I knew the future family script by heart by the end of it.) ‘Epic Mickey’ creates these great set-pieces that absolutely fail to pay off.

That’s one of the biggest problems with ‘Epic Mickey’. Whenever I beat a level, I was immediately thrust into the next one. I didn’t get to explore the areas I completed, and I never got the sense of accomplishment that’s supposed to come at the conclusion of each chapter of the game.

‘Epic Mickey’ also incorporates moral choice into gameplay, which is a neat add-on for most games, but just feels out of place in this one. Anything besides the “good” choice just feels wrong. It’s not what Mickey would do. 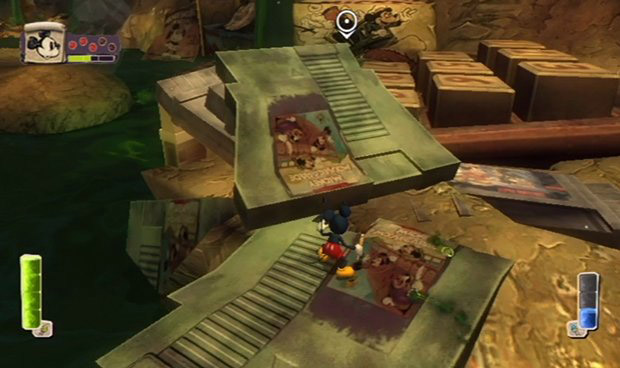 I’ve said many times that games aren’t about the setting or the atmosphere or the story. At the end of the day, no matter how disappointing the music, characters and set pieces of ‘Epic Mickey’ may be, it’s the gameplay that really matters. Unfortunately, that’s not very good either.

‘Epic Mickey’ is a 3D platformer at heart. While you’ve got some basic combat abilities, for the majority of the game you’ll be leaping from platform to platform. I don’t mind the style, but the implementation makes the game difficult to play.

As a 3D game with a single analog stick, ‘Epic Mickey’ offers absolutely no control over your camera. It would be acceptable if the game’s camera was good, but it isn’t More often than not, I found myself in a precarious position without the ability to see where I was going.

The other big control problem that I ran into is with the paint mechanic, which just isn’t that reliable. It’s difficult to accurately target an enemy, which led me into a few incredibly frustrating mechanics. There’s a system that allows you to lock the camera to your target of choice, but it still doesn’t help the targeting.

There’s a lot to dislike about the game, but it isn’t without those little moments of greatness. Without question, the level ‘Mickeyjunk Mountain’ is amazing in design if not in execution. 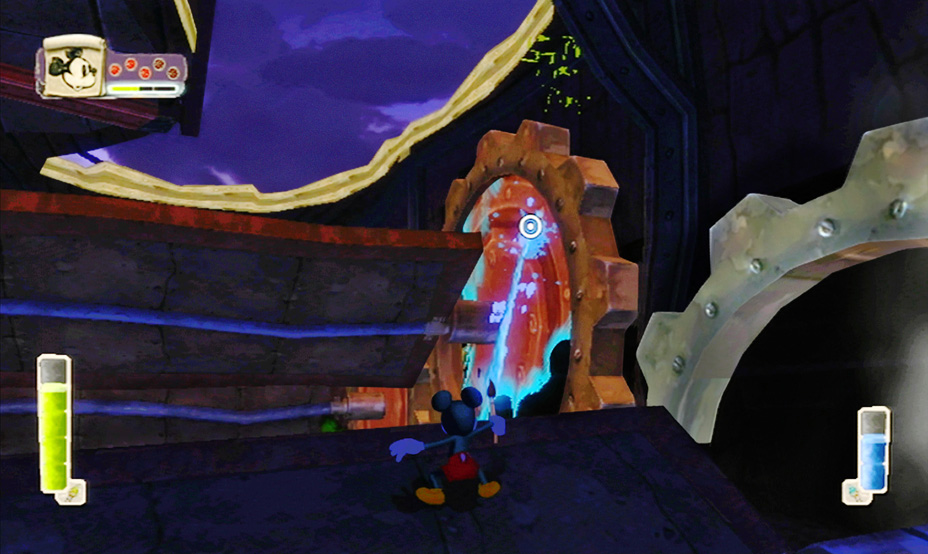 It’s full of the same frustrating platforming and puzzles, but the level is fully constructed of old Mickey Mouse memorabilia. At one point, I scaled a stack of ‘Mickey Mousecapade’ NES cartridges, the memory of which took me straight back to grade school.

I’ll be honest, I didn’t finish ‘Epic Mickey’. The unclear progression, dull quests and inconsistent camera won out over my desire to see the next cool set-piece. By the time I stopped, I realized I was forcing myself to keep playing despite being bored by the game.

Old-school Mickey fans may get a kick out of the references, but I wouldn’t recommend anyone else pick up ‘Epic Mickey’. It’s playable, but that doesn’t mean you should play it.