Sweet Zombie Jesus, I just received a new HD DVD in the mail! This comes more than a year after what we all assumed would be the last ever HD DVD was released in Germany. Nevertheless, here I hold in my hands a copy of ‘Deadlands 2: Trapped’.

Some of our forum readers may have followed the travails of indie director Gary Ugarek (aka DjfunkmasterG), who has been struggling for the better part of a year now to get his micro-budget zombie flick released as a limited HD DVD collectible. If you haven’t been following his lengthy ordeal, here are some links to the first 59-page thread and the current 39-page (and counting) thread all about it.

At first, Ugarek’s distributor, Anthem Pictures, was all for it, so long as he could drum up 500 preorders. He managed to do that much, and then the project seemed to collapse in a morass of technical problems (no production facilities would press the disc) and studio politics. What really stung most for those foolish enough to preorder (myself included) was that Anthem collected payment up front at the time of ordering, and then went silent on the whole issue for months. 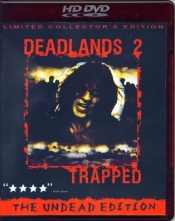 Personally, I know next to nothing about this movie. But I trust that having not seen ‘Deadlands’ part 1 will not affect my ability to follow the plot. I only ordered for the hell of it, as a collectible. I lost track of the project status a while ago and basically forgot about it. I know that some people demanded refunds, but it didn’t seem worth the effort to me. I figured, if the disc ever did miraculously come to fruition, then I’d have an interesting collectible. And if not, I’ll survive without the $30.

So, what do you know, here it is. From what I gather, the majority of the movie was shot on standard-def video and has been upconverted for the HD transfer. And apparently it’s been compressed onto a single-layer DVD-R [Correction: It’s an HD DVD-R.] crammed with bonus features (including an alternate workprint version of the movie). I kind of have a feeling that it’s going to look like crap. No offense to Gary on that. Those specs just aren’t in his favor, which he probably recognizes as well. Even so, for me, it’s still something interesting to own anyway.

The package I received also included a printed Certificate of Authenticity, which I unwittingly tore when opening the mailer. I suppose I can live without that.