Tim Burton’s gothic comedy ‘Dark Shadows‘ wasn’t exactly the box office hit its makers had hoped for. At best, the movie is middle-of-the-road for both Burton and star Johnny Depp. In my estimation, it hardly warrants a companion book, but here we have one nonetheless. ‘Dark Shadows: The Visual Companion’ is a large and rather elegant-looking hardcover by Mark Salisbury that gives fans a behind-the-scenes look at the film’s production.

If there’s one area that Burton’s tongue-in-cheek reimagining of the cult TV classic succeeds at, that would have to be the film’s wildly imaginative and atmospheric production design by Rick Heinrichs. The movie is intended to be an extravagantly madcap mix of 1970s psychedelic fashion and kitsch fads with a dark, spooky edge that subtly recalls the gothic feeling of the original show. According to the book, Burton limited the amount of computer-generated imagery in the film, which led Heinrichs’ team to build almost everything from scratch, including the Collinwood Manor. Perhaps most surprising is learning that the entire town of Collinsport was constructed on the backlot at Pinewood Studios because location scouts were unable to find a perfect New England setting. 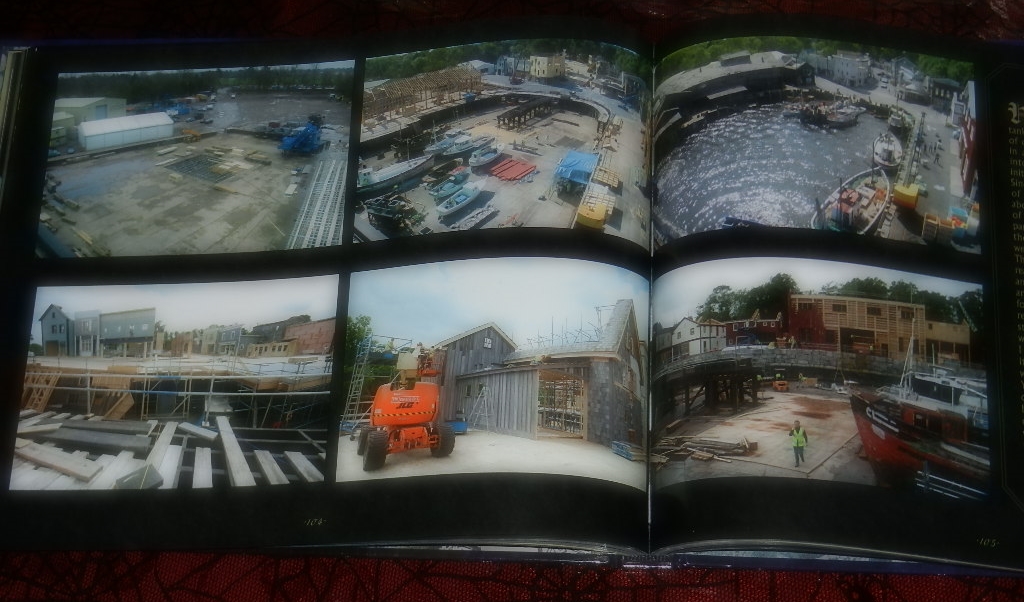 This same level of dedication and commitment also extends to the outrageous clothing. Costume designer Colleen Atwood did a splendid job in this area, diligently researching the period for a variety of styles and trends while also integrating much of the show’s fashion sense. For fans, the bright, orange-red hair and the garishly vivid makeup of Dr. Hoffman, originally played Grayson Hall, will be a familiar and hopefully funny sight on Helena Bonham Carter. The clothing for Elizabeth Collins Stoddard and Angelique Bouchard were tailor-made to fit the characters’ personalities, more than just references to the TV series. Depp’s Barnabas, on the other hand, was meticulously designed to be ostentatiously flamboyant while still retaining some of the original character’s appeal.

Capturing the endless amounts of talent in the production is the charmingly frightful photography by Bruno Delbonnel, whose previous works include ‘Harry Potter and the Half-Blood Prince’ and ‘Amélie’. This movie is the first time he’s worked with Burton, and it’s a shame that author Salisbury doesn’t devote more time to Delbonnel’s involvement. Instead, we get miscellaneous photos of him working the lights, talking to the director or just hanging around the set. The pictures are followed by more insightful writing about the stunts, the visual and special effects, and the musical score, which of course was composed by Burton’s long-time collaborator Danny Elfman. The lack of deeper discussion about the cinematography isn’t necessarily a drawback or complaint, but I would have liked to read more on that subject. 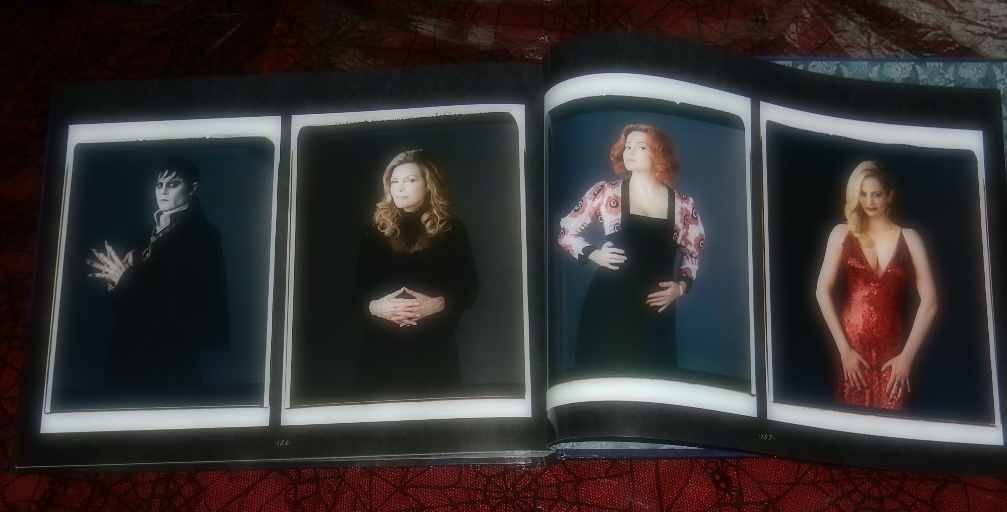 Salisbury’s book, ‘Dark Shadows: The Visual Companion’, focuses largely on the talent of the production team responsible for bringing Burton’s macabre vision to life. Even though the entire first chapter is committed to the cast, discussion still revolves around the look and feeling of the film. This is a nearly 200-page collection of photos, movie stills and original artwork, showing the set construction, costumes and props, as well as giving a sense of the camaraderie on the set. Some of these images are great eye-openers, like a group picture of Depp and Burton with the show’s original cast members Jonathan Frid, Lara Parker, Kathryn Leigh Scott and David Selby. Somehow I missed their cameo appearances during the Alice Cooper scene, but apparently they all showed up and were nicely dressed for a minor on-screen reunion. Also, the book has also a cool picture of Depp showing off his damaged prosthetic fingers, which almost looks like he broke his hand.

In the end, Salisbury’s book turns out to be a nice companion piece to Burton’s ‘Dark Shadows’, even if I still find it a rather unnecessary addition. Yet as a collection of behind-the-scenes photos with attention to the production design and the atmospheric feeling of the film, ‘The Visual Companion’ offers a surprisingly fascinating look at the amount of talent that went into the film’s making. Dedicated to producer Richard D. Zanuck, who sadly passed away shortly after the movie’s theatrical release, the book is a nice collectible for fans of both the original TV series and Burton’s remake.