Not that I want to start a panic about this, but if you own any Blu-ray titles released by the Criterion Collection in the years 2009 or 2010, there’s a possibility that some portion of those discs may suffer from disc rot and may be unplayable now.

I can’t take credit for discovering this issue. I first became aware of the problem through a forum discussion on our sister site DVDTalk (in this thread), which in turn traces back to a conversation on the Criterion Forum site.

A number of readers of those sites (and I can confirm finding this as well) have discovered that some Criterion Blu-rays released in the range of 2009 to 2010 have developed a brownish discoloration (often described as “bronzing”) and/or a cloudiness on the disc surface. In some cases (not necessarily all), this has caused disc playback problems, typically around the layer change point, which is usually a little over 50 minutes into a given movie.

Some people have reported playback problems even without visible flaws on the disc surface.

Last night, I did a visual inspection of a bunch of Criterion discs I own from this period. I have found discoloration or cloudiness on the following titles so far: ‘Bigger than Life’, ‘Days of Heaven’, ‘M’, ‘Sanjuro’, ‘Summer Hours’, ‘Vivre Sa Vie’ and ‘Yojimbo’. Additionally, a tiny bit of the plastic coating seems to be peeling off ‘A Christmas Tale’.

‘Summer Hours’ has the most amount of bronzing. You can see it around the outer edge in this photo. (Click to enlarge.) 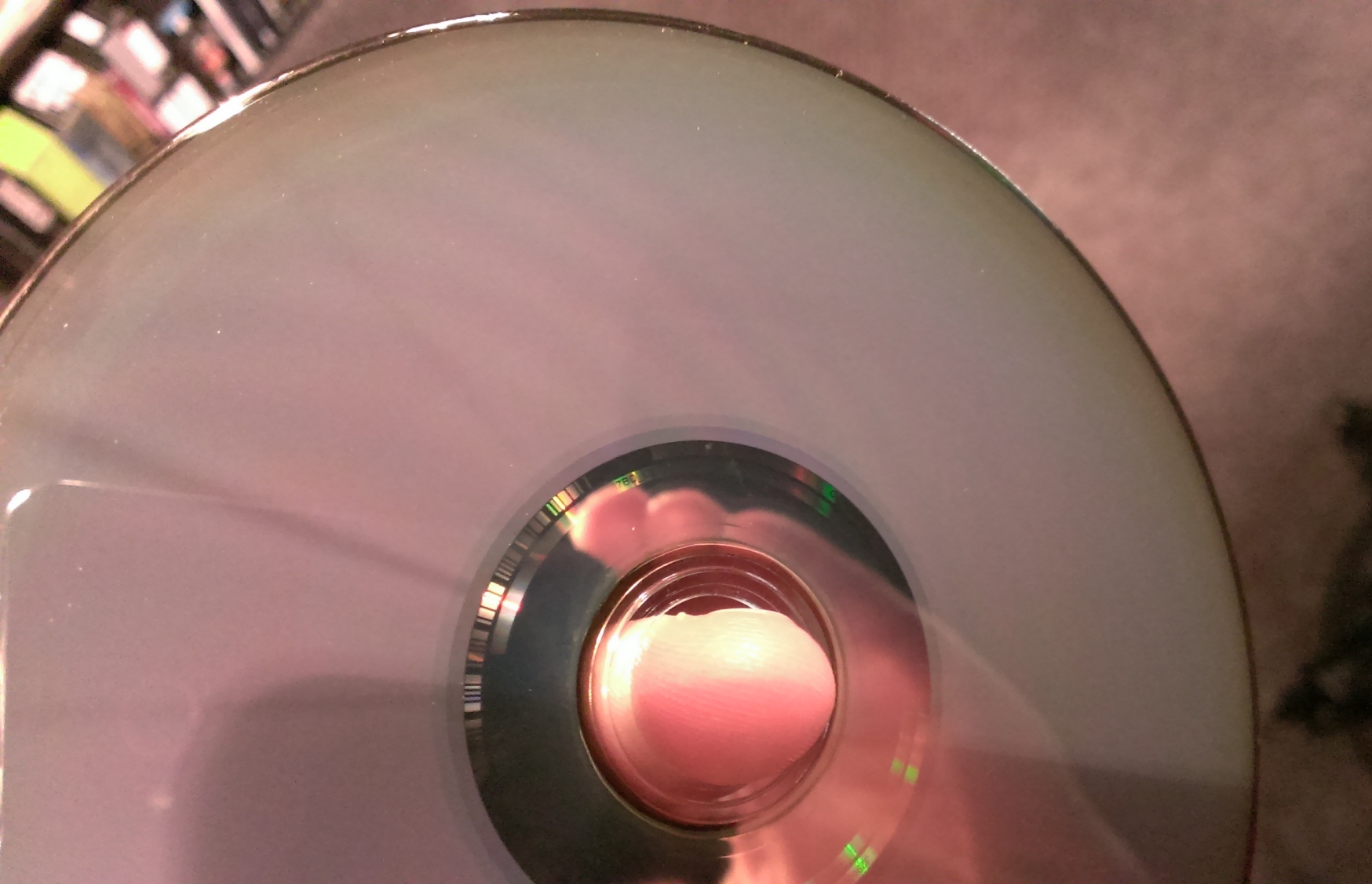 I put this disc into my OPPO BDP-93 player and skipped through the chapters. Sure enough, ‘Summer Hours’ consistently freezes when it gets to Chapter 9, which is just past the 50-minute mark. I am not able to skip to any chapters after that point.

I then tested the other titles mentioned above. Just chapter skipping through each of them beyond the 50-minute mark, ‘Bigger than Life’, ‘Days of Heaven’, ‘M’, ‘Sanjuro’ and ‘Yojimbo’ all made it past the layer change without freezing. Remarkably, so did ‘A Christmas Tale’. However, I worry that these discs may have problems I haven’t found yet, or that the deterioration may continue to the point where playback is affected later.

I also have a number of other Criterion Blu-rays from this period that don’t yet show physical signs of anything being wrong. I tested ‘Walkabout’ and ‘Stagecoach’ (two that a lot of people seem to have issues with), and both played through the layer change. I have not had have time yet to test all the rest.

Reportedly, Criterion has already been slammed with emails about this problem. Some readers have received responses with the following text:

“I hope this email finds you well. Thank you for writing in regarding a discoloration and playability problem with one or more of your Criterion discs. We are aware of this issue, which appears to affect a number of titles pressed four or five years ago at a pressing plant that we no longer use, and we are currently working on a solution. Please be assured that we are dedicated to your satisfaction and will be replacing defective discs. As soon as we have a system in place to handle exchanges efficiently, we will send out a link with instructions on how to receive replacement discs. Thank you for your patience and understanding while we work through this issue.

All the best and thanks for supporting Criterion!”

Criterion is currently in the midst of an unrelated disc replacement program for ‘Eraserhead‘, which was missing a few seconds of footage. I assume that the ‘Eraserhead’ situation will need to be resolved first before the company can facilitate corrective action on this.

Unfortunately, Criterion no longer has legal distribution rights to a few Out of Print titles that may be affected (such as ‘Howard’s End’ and ‘Pierrot le fou’), and will need to make alternate reparations for those.

As I’m sure you do, I find this problem very disconcerting. I’ve spent a lot of money on Criterion Blu-rays over the years, and a lot of those discs were only watched once at the time of purchase, if I’ve had time to watch them at all. It frightens me that a (perhaps significant) portion of my collection may be silently rotting away.

However, the Criterion Collection is a good and reputable organization, and I have every confidence that it will try to do right by its customers. While we wait for an official disc replacement program to be announced, please be patient and be courteous when contacting the company.

I advise our readers to go through your collections to identify Criterion titles from 2009 and 2010, then check each disc for physical deterioration and (at the very least) skim through each disc searching for playback glitches.

For reference, below is the list of all Blu-rays that Criterion released in the years 2009 and 2010 (identified from this page). The exact date range that the issue affects has not yet been determined, but some people claim to have problems with discs as old as ‘The Seventh Seal’ (June 2009) and as recent as ‘Stagecoach’ (May 2010).

Keep in mind that some pressing runs of these titles (especially later pressing runs) may have been performed at different manufacturing plants and may be completely unaffected. Not every copy of every disc is certain to rot.