Dracula, Frankenstein’s monster and his bride, the Wolf Man, the Mummy and the Invisible Man… Just like Coke did for Santa, Universal set the standard for how these famous monsters look, behave, and even sound. Now they’re household names, even if you’ve never seen the iconic films that defined them. Movies starring these monsters have been made and remade many times over.

But one monster has been left in the lurch: A swamp dwelling character known as Gill-Man, or The Creature.

‘Creature from the Black Lagoon’ was first brought to the screen in 1959, and in 3-D no less. In fact, both ‘Black Lagoon’ and ‘Revenge of the Creature’ were released in 3-D. They’re still the only original franchise film and sequel to claim that honor. The Creature actually spawned two sequels. The last was ‘The Creature Walks Among Us,’ which came out in 1956. And that’s where the story ends.

I’ve always liked The Creature. I can’t quite put my finger on why, but I just plain dig the guy. Part of it’s the fact that he doesn’t talk, which makes him an excellent bad guy. I’m sure a good chunk of it’s because of the realism too. Practical effects like those in ‘Creature from the Black Lagoon’ are so rare these days. If a movie shooting in 2010 has a scene that calls for a humanoid lizard swimming underwater, you can bet it’s gonna be CG. In ‘Black Lagoon,’ it’s a championship swimmer in a rubber suit. That just makes everything so much better. 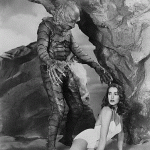 In the 54 years since the release of the final ‘Creature’ film, there have been plenty of homages to the iconic character. He’s been parodied in film, in print, and in cartoons. He’s one of the threats our heroes face in ‘The Monster Squad,’ even if his presence in the film is limited.

According to good ‘ol Wikipedia, there have been plenty of attempts at remaking the film, but it just hasn’t happened. John Landis tried in 1982, but ‘Jaws 3-D’ got in the way. Peter Jackson was given the option, but he went with ‘King Kong’ instead. Guillermo Del Toro got involved in 2002. What a film that could have been! In 2005, directorial duties went to Breck Eisner, the son of Michael Eisner and the director of ‘The Crazies.’ But none of them are involved anymore.

The current lineup for the 2011 is director Carl Rinsch, who’s focused on commercials up until this point. To be fair, they’re really cool commercials featuring robots doing parkour. The writer is Gary Ross, the son of the original film’s writer Arthur Ross. Gary also penned ‘Big,’ ‘Mr. Baseball,’ and ‘The Tale of Despereaux.’ So he’s not untested, but he’s not exactly experienced when it comes to creature features either.

The film’s still in pre-production, which means that it’s early enough to cancel without much to-do. It’s got a 2011 release slated. With the luck people have been having getting this thing made, I’m not holding my breath.